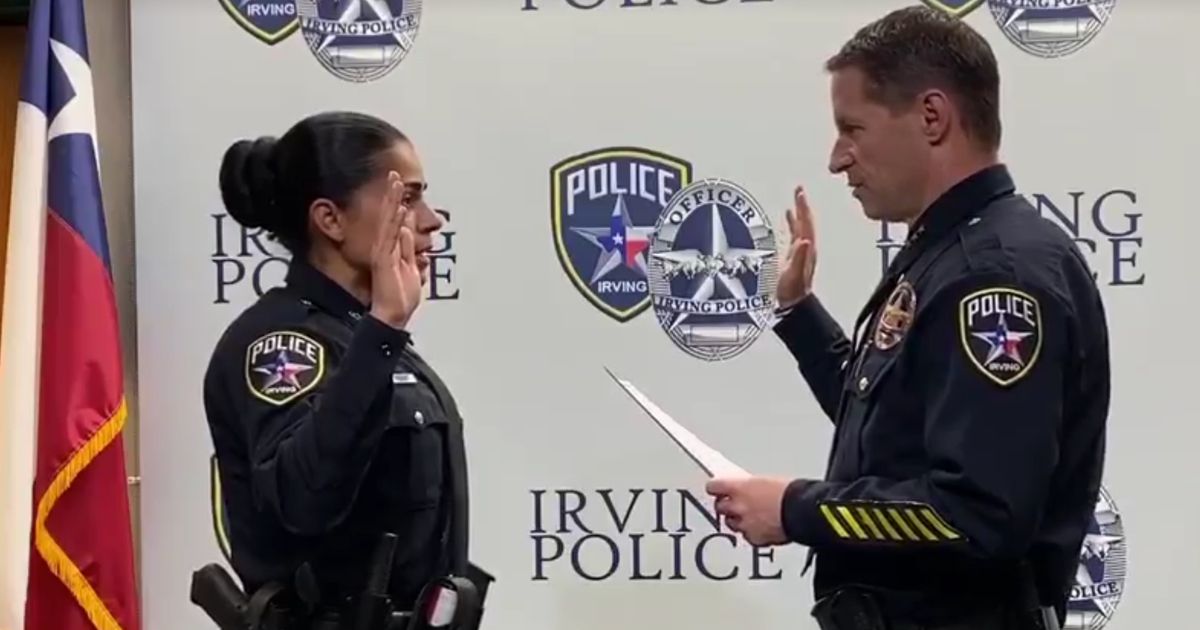 Sgt. Giovanni Pando has spent the past two years overseas, serving as an explosive ordnance disposal specialist with the U.S. Army.

Meanwhile, back in Irving, Texas, Pando’s mother, Erika Benning, had been working toward her lifelong dream of becoming a police officer.

Last Friday, Benning stood alongside Irving Chief of Police Jeff Spivey to be sworn in as the department’s newest police officer.

Benning’s husband, Corey, was at the ceremony to pin the official police badge on his wife’s uniform when Pando walked around the corner.

All swearing-ins are special but every once in a while one tugs at your ❤️strings a little more than others. Yesterday, at Off. Benning’s swearing-in she was surprised by her son, who has been stationed over seas & has not seen in over 2 yrs, would be the one pinning her badge pic.twitter.com/H3TWxhmOP8

According to KDFW, Benning had not seen her son in over two years. Tears streamed down the officer’s face as she realized her son had made it home for her milestone day.

“I see him and it took me a good two seconds to realize that this was real,” Benning told KDFW.

As the family hugged, cried, and stood together for the first time in years, Pando proudly pinned the badge on his mother’s uniform.

“All swearing-in ceremonies are special but every once in a while one tugs at your heart strings a little more than others,” the Irving Police Department wrote on social media.

Pando said he and his father had been planning the surprise for months, carefully keeping the secret from his astute mother.

“It was difficult. You know,” Corey said of keeping things quiet. “Obviously, having a wife as a police officer doesn’t make it any easier trying to keep a secret.”

“Now I understand why I didn’t hear from him for the whole week,” Benning said of her son. “I actually didn’t speak to him for a whole week, and I was like, ‘Oh, OK. I guess he’s busy.’”

“We’ve always been a family, so him leaving and not seeing him for two years was very tough, and then knowing that he wasn’t going to be here to celebrate that special moment was really hard for me,” she said.

The overwhelming surprise left the room in tears, including Benning, who fought to hold them back.