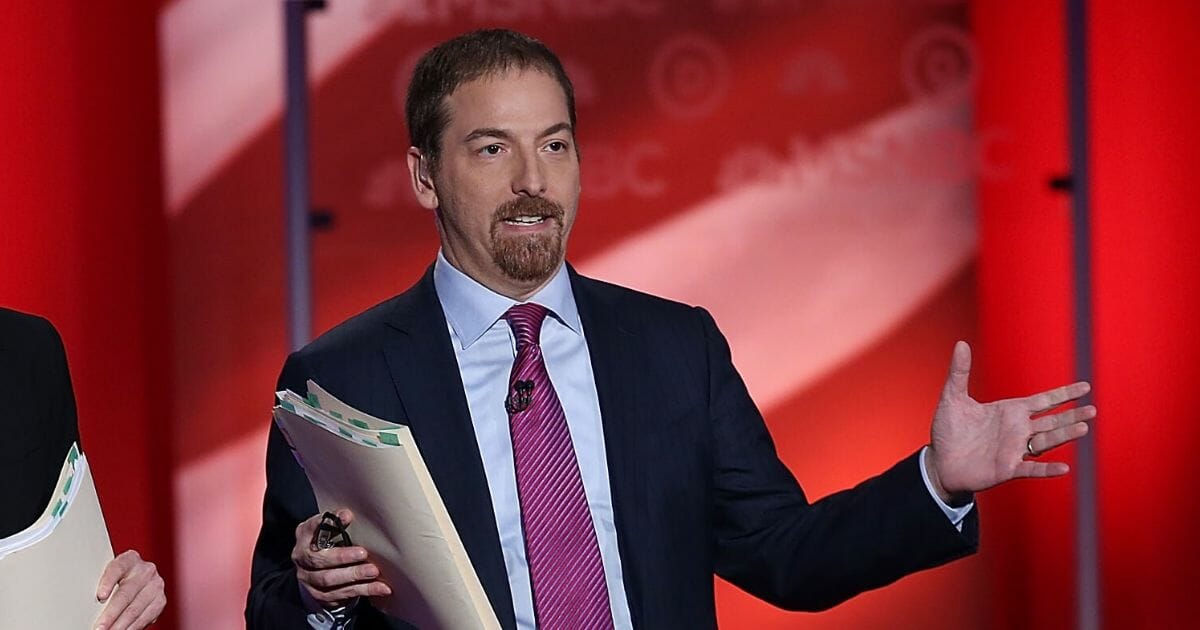 Justin Sullivan / Getty ImagesChuck Todd, host of “Meet the Press” on NBC, is known to spin the news in a liberal direction, but Monday night’s meltdown at the Iowa Caucuses couldn’t be spun into a success. Todd was caught on a hot mic saying “this is an effing disaster.” He’s pictured here preparing to moderate the Feb. 4, 2016, primary debate between former Secretary of State Hillary Clinton and Vermont Sen. Bernie Sanders. (Justin Sullivan / Getty Images)

It’s not often Chuck Todd nails it like this.

The reliably liberal host of NBC’s “Meet the Press” has been a known shill for Democratic causes for years, and conservatives have long been suspicious of anything Todd purports to report.

But, as the conservative website Twitchy reported Tuesday, a hot mic that caught Todd speaking during a report from the Iowa caucuses on Monday showed the television newsman can describe the news accurately when he wants to.

“Oh, my God,” Todd can be heard saying off-camera, his words barely discernible.

“What an effing disaster.”

Check it out here and listen closely. Todd’s voice comes in about the 4-second mark.

The words aren’t easy to make out. But it appears that plenty of NBC News viewers could pick them up in real time.

i swear to god – just heard chuck todd say “this is a disaster” (referring to #IACaucus) on the NBC Now live stream in a hot mic moment – and.. he’s not wrong.

Did Chuck Todd just say “what a f*cking disaster” on a hot mic while reporting on the Iowa caucuses?? @NBCNews

“Did Chuck Todd just say “what a f*cking disaster” on a hot mic while reporting on the Iowa caucuses??” one user asked.

To be fair to Todd, there was no need for the asterisk, since the word was euphemized already.

@chucktodd We heard ya, and yeah, it was pretty much that

Todd has forged quite a reputation for himself for liberal bias lately — mocking religious believers, likening President Donald Trump’s impeachment to the O.J. Simpson murder trial of a quarter-century ago or accusing Republicans of spreading disinformation.

Did you agree with this Chuck Todd description?

But on occasion even he’s forced to describe reality even conservatives can recognize, like in July when he called the report by then-special counsel Robert Mueller a “disaster.” (Maybe it’s his go-to word for Democratic debacles.)

That was the case on Monday, when the Iowa Democratic caucuses were melting down on national television, and the contest that had been hyped for months as the official kickoff of the Democratic primary contest was heading for a limbo of uncertainty.

As of late Tuesday morning, still no results were available and the Los Angeles Times was reporting they might not be available all day. That means the Democratic clown car of candidates was on its way to next week’s New Hampshire primary with no clear winner.

Even the most articulate member of the media spin machine won’t be able to turn the Iowa debacle into a positive for Democrats, and the only real winner out of the caucuses was President Donald Trump, the man the mainstream media and Democrats are equally desperate to defeat come November.

But if there was one silver lining for liberals it was this: When it comes to reporting, one of their most dedicated supporters in the media finally nailed a story right on its head.