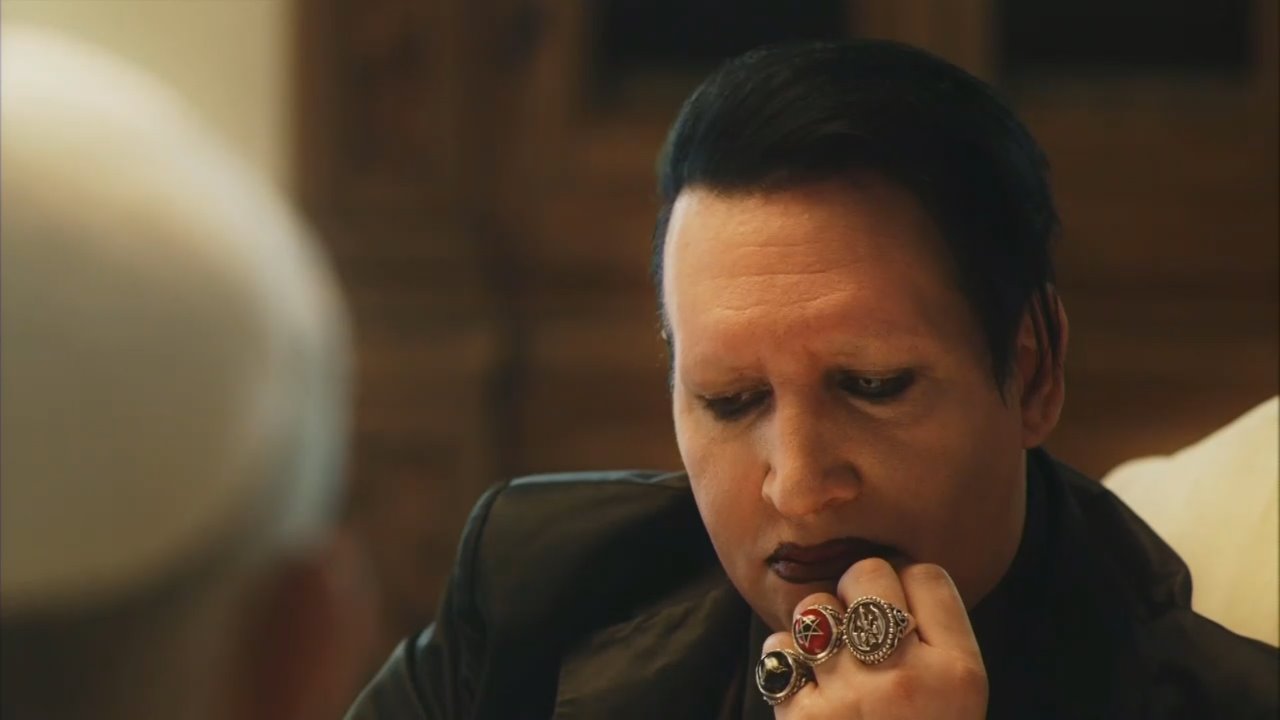 Not satisfied with simply overtaking its predecessor season, HBO’s The New Pope now seems determined to stuff as many offensive materials in a single hour. Within the latest hour alone, we have Marilyn Manson advising the Pope, rebellious nuns asking for equal rights, homosexual priests sleeping around, and even more breasts. Never before has a show about the Church so desperately needed Jesus.

The February 3 “Fourth Episode” opens with Pope John Paul III (John Malkovich) speaking with Marilyn Manson of all people. The Pope has previously described himself as a fan of the controversial musician, and now he’s come to visit the Pope as a fan, despite clearly displaying Satanic symbols. In fact, they have a friendly conversation that even approves of drug use. Manson even manages to give the Pope some advice.

Marilyn Manson: Well, I remember this amazing speech that you gave in Venice, but I don’t remember you having a beard then.

Marilyn Manson: Oh. So…who are you?

Marilyn Manson: Oh, oh…oh. Please forgive me, Holy Father. You gotta understand, I’ve been in the studio holed up for months, and I don’t really keep track of the news, so…

Marilyn Manson: Potassium phosphate mixed with a capsule of Xabol.

John Paul III: So you’re quite the pharmaceutical adventurer.

Marilyn Manson: May I ask what happened to the old pope?

John Paul III: He’s in coma, and he had a successor, Francis II, and he died.

Marilyn Manson: Wow. Um…have you gone to visit him?

Marilyn Manson: The pope in a coma.

John Paul III: No, not yet.

Marilyn Manson: Maybe you should.

Sure enough, the Pope does decide to visit the comatose Pope Pius XIII (Jude Law) at Marilyn Manson’s suggestion. Although he wants the meeting to be private, his presence near the residence quickly draws the world’s attention, so it looks like listening to the satanic musician was a good call.

Unfortunately, other problems grow around that newsworthy meeting. In addition to now facing a financial crisis and corrupt members, the Church continues to have issues with the nuns. After being denied a request in the previous episode, they now demand “respect” and equal rights in service. This is quickly rejected since the Church and its members are obviously not enlightened enough to embrace feminism.

Cardinal Voiello: I am all ears.

Sister Lisette: We…demand respect. Social, moral, and economic recognition for the duties we sisters perform. We want to be welcomed into the bosom of the Church, to be granted a more active ministry, including administering the sacraments. And, in general, we expect the male clergy to adopt a psychologically mature attitude in its relations with us female members.

Cardinal Voiello: Please, clarify this last point for me.

Abbess: Do you really need me to elaborate on the sort of things your brothers are capable of?

Cardinal Voiello: No, not now– I don’t have time– but a detailed written account would prove most useful.

Abbess: That you shall have.

Sister Lisette: No, you won’t. It’s a trap, Reverend Mother. We will be dismissed as tattlers, and he will have a record of all his accomplices’ depravities, the better to blackmail them with.

Cardinal Voiello: Spectacular–the talent. This will be a long war, though it will end as they all do, with my victory. But you, Sister Lisette, will make a formidable adversary.

Sister Lisette: You can bet on that.

Abbess: Now what are you doing?

Sister Lisette: Then we will carry on with our strike.

Cardinal Voiello: Fine, and we priests will learn how to cook and wash and iron our robes. It’s about time.

However, the male cardinals have their own problems, particularly Cardinal Gutiérrez (Javier Cámara). Although his homosexual urges were only alluded to previously, this week he went all the way with a man outside of the church. And, according to his confession to the Pope, this is a regular occurrence as he states, “Freddie satisfies my body, God satisfies my spirit.” Fortunately for him, the Pope also has his sexual fantasies as he visualizes his marketing agent Sofia (Cécile de France) stripping while Gutiérrez gives his confession. He absolves Gutiérrez of his sins, but nothing will absolve the show of these messes.

All of this finally culminates with another topless scene. Last week, Esther (Ludivine Sagnier) considered prostituting herself for money at the encouragement of her priest, but she balked before anything could happen. This time, she’s open to having an invalid young man fondle her bare breasts for us to see. Somehow, this is an emotional moment.

The New Pope continues to slide into more degeneracy, and from the look of things, we’re nowhere near done yet.