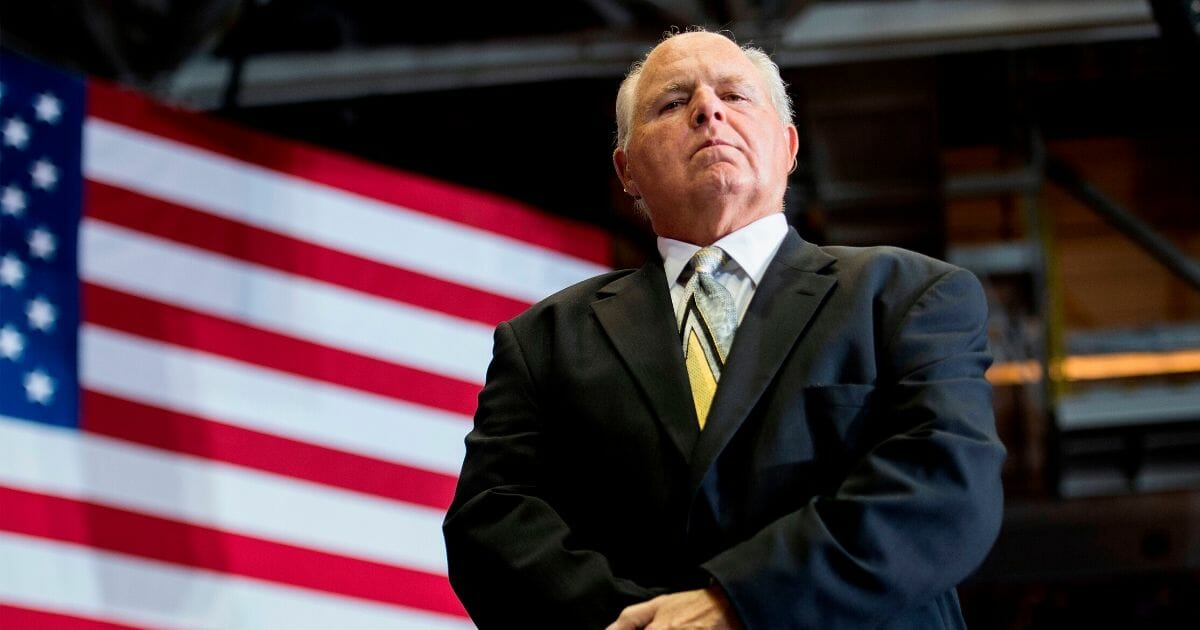 When conservative icon and radio talk show host Rush Limbaugh announced to the world on Monday that he’s suffering from “advanced” lung cancer, it came as a shock to his millions of listeners throughout the country.

And even for those who aren’t fans, it should have been a moment of reflection.

When a giant of the American political and cultural life for more than a quarter-century decides to let the public know about a very private agony – literally a matter of life and death – simple decency demands some respect.

But as some overheated social media commentary showed, liberalism in the 21st century has lost its understanding of the word.

Some took shots at what they probably think of as “wit” – maybe hoping for retweets and likes and adoring words from all the Beautiful People.

I’m so sorry for lung cancer, no one deserves Rush Limbaugh.

I wish him the best medical care he’s worked on denying to others.

I’m not the religious type but Rush Limbaugh’s diagnosis tells me that God wanted the Senate to call witnesses.

And some were simply crude – making light of another human being’s word of a potentially fatal disease with mimicry and memes. As though mocking a man who’s beaten liberals in the public square for decades will somehow take away the sting of continuous defeats.

Now he has cancer…

RELATED: Rush Just Prepared Articles of Impeachment for the Next Dem President

Remember, this is the allegedly tolerant left. These are the same hypocritical mobs who pretend to tear up at the plight of criminals being held in the American justice system (what they call “mass incarceration”); the same people who assail Americans who stand up for their God-given rights, guaranteed by the Constitution of the United States, as mouth-breathing, knuckle-dragging thugs.

Well, some of those knuckle-dragging thugs were reading the leftists’ posts, and weren’t happy. Or surprised. The responses below are to the first tweet above, but they will apply to the others, too.

“Compassion” from the left. They care so much…. This is how they roll.
Last week Conservatives asked their followers to pray for Jerry Nadler and his wife. That tells it all.

So what I’m reading is, “I’m so sorry for my check mark, I’m not even worth being human.”

Wow. You’re so edgy and cool.

I’ll reserve my more pointed comments for when some sort of tragedy strikes you.

This one put it best:

Rush Limbaugh may have lung cancer, but as the replies to this tweet show, a lot of folks have a malignancy in their souls. https://t.co/u44lJsfJXx

“Malignancy in their souls.”

Yes, the leftists piling on Limbaugh’s news are some of the same people who pride themselves on their alleged “caring.” Yet some of these same people are rushing to their phones and laptops, hoping to get the first “hot take” on the news of the day by openly rooting for a disease to do what all the empty statist arguments of the past few decades could not:

Silence and defeat Rush Limbaugh – one of the most profoundly influential men in modern American politics.

In his announcement on Monday, Rush showed all the class and caring listeners have grown accustomed to over the years. But just as he does when taking on liberals, he met the subject head on.

“I can’t help but feel that I’m letting everybody down. The upshot is that I have been diagnosed with advanced lung cancer,” he said, according to Fox News.

“I thought about not telling anybody,” he said. “It is what it is. You know me, I’m the mayor of Realville. This has happened and my intention is to come here every day I can, and do this program as normally and competently and expertly as I do each and every day because that is the source of my greatest satisfaction professionally, personally.”

Limbaugh’s listeners can understand that.

Even some of Limbaugh’s opponents probably do, too. A mortal disease is the enemy of all mortals, and regardless of political philosophy or religious belief, every human on earth is mortal.

The ghouls who took to social media to cheer for the physical debilitation of a man who bested them in the intellectual sphere for longer than many Americans have been alive should remember that.

If decency is too much to ask, recognition of at least one universal reality shouldn’t be.