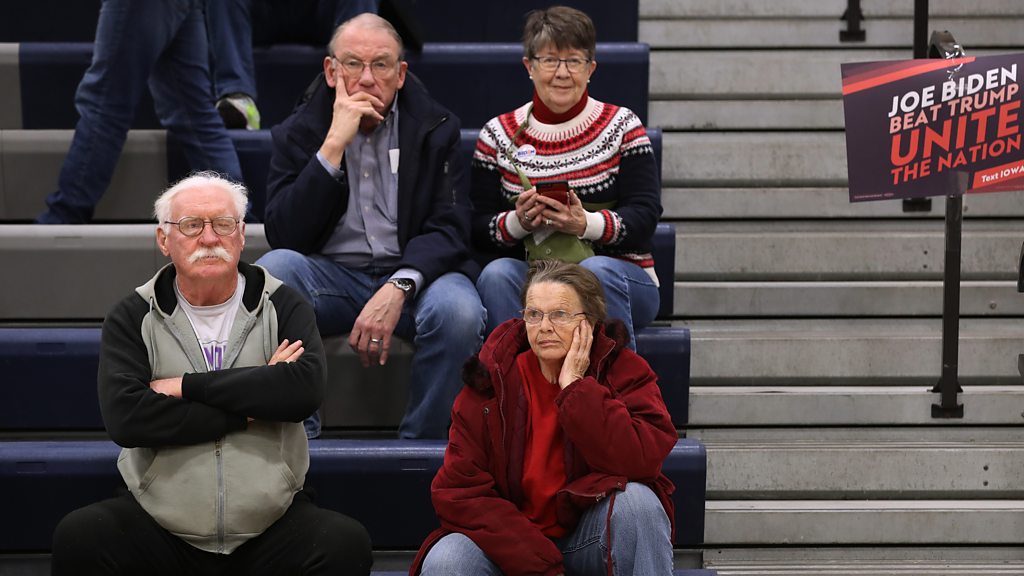 Chaos in the Iowa Democratic caucuses, where contest results have been delayed by technical glitches, have been seized upon by Donald Trump as a victory.

Mr Trump tweeted that the debacle was an “unmitigated disaster”, suggesting it was proof that Democrats could not be trusted to lead.

“The only person that can claim a very big victory in Iowa last night is ‘Trump’,” he wrote.

Votes will be tabulated by hand and reported later on Tuesday, officials said.

However, the indeterminate result on the night has created scepticism of the caucus process and reignited questions over whether Iowa – a rural, white state not representative of the US electorate as a whole – should continue to be the place to hold the first primary contest.

Mr Trump dismissed the suggestion. “As long as I am President, Iowa will stay where it is. Important tradition!” he tweeted.

Democrats hoping to take him on in this year’s election, on the other hand, have set their sights forward.

Many have already landed in New Hampshire, where the next primary contest is due to be held on Tuesday, 11 February.

What happened at the caucuses?

On Monday, voters flocked to more than 1,600 schools, libraries and churches in Iowa to have their say in who should be on the ballot in the November presidential election.

Mr Trump easily won the Republican contest, but a winner was not declared in the Democratic contest.

Despite the absence of results, several candidates are claiming victory.

Earlier, Mr Buttigieg told supporters that “by all indications” his campaign was “going to New Hampshire victorious”.

The vote in Iowa was a caucus – which involves people attending a meeting before voting on a candidate, perhaps via a head count or a show of hands.

Voters in primaries – like the vote in New Hampshire – can just turn up at a polling booth and vote in secret.

What are the organisers saying about the Iowa situation?

Iowa Democratic Party (IDP) spokeswoman Mandy McClure said officials had found “inconsistencies in the reporting of three sets of results” that was simply a “reporting issue” rather than a hack or intrusion.

She denied an app created to allow reporting of results had gone down.

“The underlying data and paper trail is sound and will simply take time to further report the results.”

The local party chairman Troy Price later said : “We are validating every piece of data we have against our paper trail.

“That system is taking longer than expected, but it’s in place to ensure we are eventually able to report results with full confidence.”

Rules on reporting were changed for this year, with Iowa Democrats required to report three numbers to party headquarters, rather than just the final delegate totals.

Did the app crash?

Ms McClure’s statement was flatly contradicted by party officials at county level, who blamed technology issues for the delay.

Elesha Gayman, the Democratic chairwoman of Scott county, Iowa’s third largest, said many officials were having issues reporting results and had been left hanging on hold.

Dallas County chairman Bryce Smith also said the app had crashed, a view echoed by Nate Gruber, the Democratic vice-chairman of Black Hawk county, a part of the state with the largest concentration of African Americans.

“It doesn’t really work,” he said, adding: “No-one can reach the state party to report.”

Calls to the Iowa Democratic Party hotline late on Monday had the same recorded message: “All of our operators are currently busy.”

The Democratic Party establishment spent the past few days hand-wringing over what they might view as a doomsday scenario where Bernie Sanders posted a solid win in the Iowa caucuses. It turns out they’re heading towards an outcome much worse than that.

Three years after having their party servers hacked by Russians in an attempt to disrupt the 2016 election, a “quality control issue” derailed the reporting of the Iowa results.

It’s not a good look for the Democratic Party – or for American democracy.

It will be a snafu that launches 1,000 conspiracy theories and leaves a race that might have received some clarity after a year of campaigning a muddled mess as the primary season gets underway.

The candidates are vying to win the opening contest of the 2020 White House campaign and become the Democratic nominee who will challenge Mr Trump, a Republican, in the 3 November election.

But the state can offer crucial momentum – the last four Democratic nominees have all won the Iowa caucuses.

The front-runners among the 11 remaining contenders are Senator Sanders and former US Vice-President Joe Biden.

How did the campaigns respond?

Amid the delay, party officials held a call with the rival campaigns.

Lawyers for the Biden campaign wrote a letter to the Iowa Democratic Party to register concern about the “considerable flaws” and “acute failures” in the reporting system.

“The app that was intended to relay Caucus results to the Party failed; the Party’s back-up telephonic reporting system likewise has failed,” said the letter.

A source in Mr Buttigieg’s campaign told Reuters news agency the delay was “definitely going to de-legitimise whoever wins”.

How did the Trump campaign respond?

Trump 2020 manager Brad Parscale said Democrats were “stewing in a caucus mess of their own creation with the sloppiest train wreck in history”, adding that it would be “natural for people to doubt the fairness of the process”.

But Republicans have had their own problems in Iowa previously. In 2012, Mitt Romney was declared the winner of the caucuses only for the party to say two weeks later that Rick Santorum had actually won.

The president’s eldest son, Donald Trump Jr, tweeted that the Democratic results chaos was all a “fix”.

However, there was no indication that it had been caused by anything other than human or technical error.

Republicans also held Iowa caucuses on Monday and, as predicted, Mr Trump – who enjoys around 90% support in his party – squashed his two little-known challengers.

The race will next move on to the other three early-voting states of New Hampshire next week, then Nevada and South Carolina later in February.

On Super Tuesday, 3 March, 15 states and territories will vote.

The field will be whittled down until a final nominee is crowned at the party convention in Milwaukee, Wisconsin, in July.