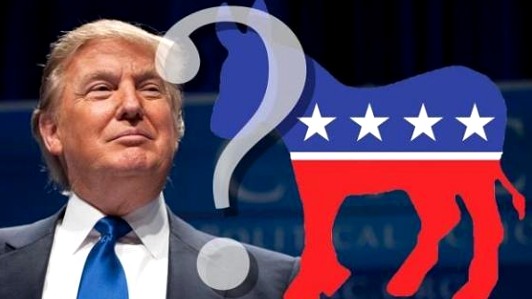 Even though this year’s presidential election is still nine months away and Democrats aren’t even close to nominating a candidate, some liberals are already terrified that President Trump and the members of his administration will make any transition as difficult as possible.

Who writes about the presidential transition almost a year before Inauguration Day?

Politico uncorked the latest left-wing conspiracy in an article headlined:

Democrats are already bracing for a ‘hostile’ Trump transition

They’re not measuring any drapes. But Democrats fear Trump and his aides won’t meet, share documents or otherwise cooperate in a handover of power.

Democrats are bracing for the possibility that if President Donald Trump loses the 2020 election, he and his aides will bungle a smooth handover of power — and maybe even try to outright sabotage the transition.

At least one outside group that works with the 2020 Democratic campaigns has quietly launched a transition-related effort designed to offer an early look at the landscape that awaits them if they oust Trump.

Separately, a prominent good government organization, the Partnership for Public Service, is openly appealing to Trump and his Democratic opponents to start thinking early about transition planning, even if it comes across as “presumptuous.”

Always beware a group that the media describe as a “good-government organization.” Given the way President Trump has upset the normal patterns of governance, such an organization is a natural source for a Trump-will-ruin-everything narrative.

Toosi reported Elizabeth Warren already has a plan for the transition, and “That Democrats are making transition-related moves more than nine months before Election Day underscores not only their distrust of Trump, but also the reality that taking over the U.S. government is a mammoth task with high stakes.”

The stakes are so high Politico granted everyone in Democrat presidential campaigns anonymity, willy-nilly: “All spoke on condition of anonymity because of the sensitivity of the issue, and because no campaign wants to be seen as assuming that Trump will lose.”

But Toosi let the fears fly:

Some fear that Trump aides will destroy paper trails related to controversial issues, not to mention quietly push through last-minute initiatives that could constrict the next administration’s ability to tackle hot button issues such as immigration or relations with Iran.

Some Democrats fear they will have to devote precious time in the early weeks of a new administration piecing together what happened under Trump on a range of areas.

And that’s all if Trump accepts the election results and agrees to leave.

“This could be the most hostile, least professional transition in American history,” a former senior official in the Obama administration said. “And the new administration will have to spend the early period — when it should be hitting the ground running — unearthing buried bodies.”

Buried bodies? What horror movie is this?

Liberals expect Trump to greenlight many last-minute regulatory changes and other initiatives to solidify his legacy in case he loses reelection. “That’s not unprecedented,” the reporter noted. Obama “did the same thing.”

Meanwhile, some Trump supporters went on the record to say Democrats are blowing things out of proportion. For one thing, plenty of think tanks and career government staffers can provide guidance for an incoming administration.

While the Trump campaign did not respond to requests for comment, a White House spokesman stated: “The Trump administration will meet all requirements under the law as it relates to any needed transition between administrations.”