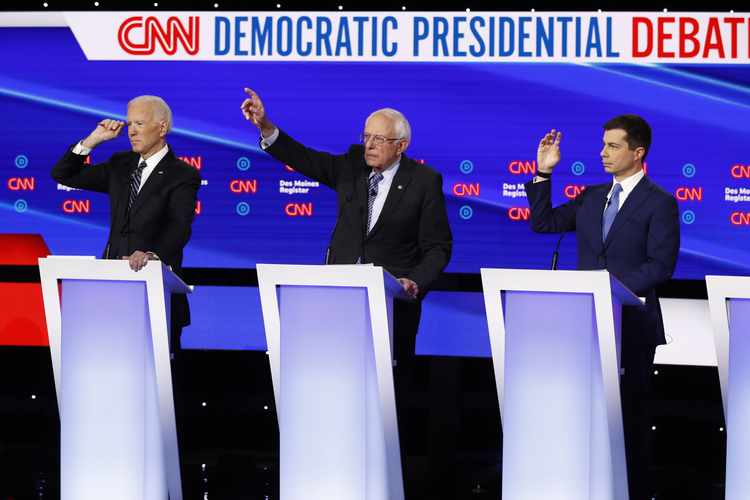 In one sense, this cycle’s Iowa caucuses are overhyped. Few delegates are at stake, and the wide field means that those delegates are likely to be divvied up among several candidates. Come Tuesday, it is unlikely that there will be a meaningful delegates leader.

In a wider sense, however, the Iowa caucuses really do matter. The difference between finishing first and fourth can make or break candidacies. In particular, the position of the nominal Democratic front-runner, former Vice President Joe Biden, will make a substantial difference in how the primaries shake out. There are, of course, dozens of possible outcome permutations before Super Tuesday, but let’s examine four basic ones for Monday night, and what they could mean for the rest of the race.

Scenario 1: Sen. Bernie Sanders wins, Biden is second, and Pete Buttigieg and Sen. Elizabeth Warren finish in some combination of third/fourth. This is what the current RCP average shows, and it is probably the second-best scenario for Biden, especially if his margin is close. It still isn’t good, mind you – this raises the distinct possibility that Sanders sweeps three of the first four races and just rolls on from there – but Biden would likely still have a strong showing in South Carolina and move into a one-on-one with Sanders, with Michael Bloomberg potentially playing a spoiler role. Moreover, like it or not, the establishment is probably stuck with Biden as its horse to back in the primaries in this scenario.

Scenario 2: Biden wins. If that happens, Biden becomes a heavy favorite to secure the nomination. Yes, Sanders will likely win New Hampshire, which could give him a new lease on life, but we’d basically be looking at a race similar to 2016 (which Sanders ended up losing by almost 1,000 delegates). Nevada would likely be close, then Sanders would lose South Carolina as the field consolidated. You can conjure up scenarios where some other candidate still pulls it out, but they’re all pretty unlikely.

Scenario 3: Sanders wins, Biden finishes third or lower. This is the nightmare scenario for the Democratic establishment. Just how bad of an outcome it would be obviously depends on exactly where Biden falls, but the overall concern for Biden is that his establishment backers remember that he’s run for president twice without winning a primary or caucus, and will decide that the third time is not the charm. Biden would prefer someone like Warren in second place as opposed to Amy Klobuchar or Buttigieg, but either way, a finish like this could signal the wheels finally coming off the train.

Scenario 4: Sanders wins, Biden is second, Klobuchar is third. This is a milder version of Scenario 3. The concern for Biden is similar: That his establishment backers start to sense that he can’t get it done, and an establishment-friendly alternative emerges. That’s essentially what is going on here. That threat is always present with Bloomberg waiting in the Super Tuesday states, but Klobuchar coming in third would suggest genuine momentum for her. If Biden were to fall farther behind in New Hampshire as well, it could become a major headache for him. Worse still, Klobuchar probably stays in through Super Tuesday in this scenario, raising the possibility of a three-way establishment split, with Sanders scooping up delegates as the only progressive candidate remaining.

There are other scenarios of course: Warren wins; Klobuchar surges, a la Rick Santorum, to a win; Biden comes in second but Sanders blow the roof off. It’s impossible to game them all out. This illustrates just how much uncertainty there is right now, but also how clarifying Iowa can be this time around. Right now, the Democratic nomination can plausibly go to six candidates; that’s highly unlikely to be the case 24 hours from now.