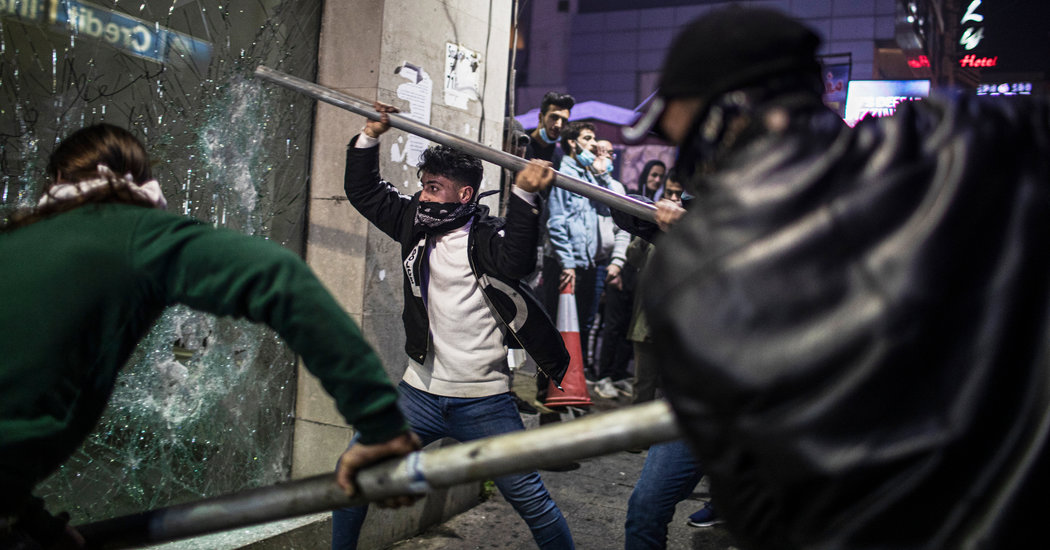 KAFR RUMMAN, Lebanon — There is a Lebanese phrase that translates, roughly, to “a slapping.” That seems to be what happened to several antigovernment protesters who were caught on TV denouncing Hassan Nasrallah, the leader of the Islamist militia and political party Hezbollah, in the early days of the now monthslong Lebanese uprising.

The smacking they received from a party that brooks little pushback, and wields tremendous influence in Lebanon’s government, might have been physical or it might have been verbal. Either way, the protesters appeared again on TV a few days later, looking subdued — this time, to apologize.

“Sayyid means a lot to me. There are thousands who admire him, but I’m like No. 100 on the list,” one man said, his voice meek, using a respectful honorific for Mr. Nasrallah, whom the protester had previously accused of letting his community starve.

The on-camera apology was a prelude to more violent retributions against protesters from the Shiite Muslim community, the largest of Lebanon’s 18 recognized religious sects, which for decades has drawn on Hezbollah for protection, jobs, social services and, for many, a sense of shared struggle against Israel and other enemies.

As Lebanon hobbles into its fifth month of political and economic meltdown, the countrywide protests continue to include protesters of all religious backgrounds, uniting in scorn for leaders who cannot offer even the basics: 24-hour electricity, a functional economy or trustworthy governance.

But the protests have forced many Lebanese Shiites into a dilemma: How can they square their loyalty to Hezbollah with its support for the status quo? And will Hezbollah keep trying to extinguish the rebellion, or listen to it?

Mr. Ismail’s recent history sounds like that of many Lebanese protesters. He has gone into debt to pay school fees for his children. His wife, Farah, said she had been shut out of all the teaching jobs she had applied to because she lacked party connections.

Even the man who publicly apologized to Mr. Nasrallah may have renounced his insult, but not his plea. “Please help us,” he begged in the apology video. “Really, we’re starving. We don’t have jobs.”

Among Shiites, the protests spring in part from Hezbollah’s simultaneous military success and neglect of domestic issues, said Randa Slim, a Lebanon analyst at the Middle East Institute.

The security threats that rallied the group’s base, whether Israel or Sunni extremists in neighboring Syria, have receded in urgency. And when Hezbollah entered Lebanese politics in 2005 to protect its status as a shadow army, it propped up the government’s incompetence and corruption rather than delivering on its promises of reform.

American sanctions on Hezbollah and its patron, Iran, have left it less able to offer the subsidies, services and jobs that its supporters used to count on, just as the Lebanese economy was teetering.

As with other liberation movements, Hezbollah has found governance more complicated than guerrilla warfare.

“Hezbollah has never prioritized bread-and-butter issues, but suddenly they’re faced with a community that’s basically saying, bread and butter are a priority,” Ms. Slim said. “It’s now part of a government that’s corrupt, and they can’t blame others for the corruption; they’re part of the corruption equation. So the question is, how are they going to respond?”

The Amal party has fostered loyalty through jobs and patronage, but its leader, Nabih Berri, the speaker of Parliament, is widely viewed as a profoundly corrupt pillar of Lebanon’s much-derided ruling class.

So far, Hezbollah and Amal have mobilized to protect the status quo, and the protests in majority-Shiite areas have visibly shrunk as the parties have moved to smother the uprising. With Hezbollah’s patron and partner, Iran, under growing pressure at home and abroad as tensions with the United States soar, analysts say Hezbollah needs more than ever to preserve its power and influence in Lebanon.

Early on, Mr. Nasrallah, for whom many Shiites feel genuine reverence, criticized the protests that began in October and called on his supporters to go home, prompting some Shiites to leave the streets. Violent scuffles broke out when some protesters included Mr. Nasrallah among the political figures they wanted to sweep from power, chanting, “All of them means all of them — Nasrallah is one of them.”

Even many nonmembers of Hezbollah credit Mr. Nasrallah with ousting Israel from its 18-year occupation of south Lebanon. His charisma and credibility outstrip that of any other Lebanese political figure: Mr. Nasrallah’s son died fighting the Israelis, and, unlike the mansion-dwelling jet-setters who populate much of the government, he is usually considered personally incorruptible.

“We love Sayyid Hassan Nasrallah at home, but here, we love Lebanon,” said Ghazie Atrash, 40, a protester from Baalbek, in the Hezbollah-dominated rural interior, who joined the huge demonstrations in Beirut this fall.

When asked whether Mr. Nasrallah bore any responsibility for Lebanon’s dysfunction, however, Ms. Atrash was emphatic. “He’s not part of the government,” she said. “No.”

Though Mr. Nasrallah does not hold office, Hezbollah and its allies dominated the last government, which resigned amid the protests in October, as well as the new cabinet formed in January.

Hezbollah and Amal followers have repeatedly swept into protest sites in Beirut and other cities, thrashing protesters with sticks and fists. Though the parties have not openly encouraged the attacks, the men have shouted party slogans or, simply, “Shia! Shia! Shia!”

In interviews in majority-Shiite areas, protesters reported receiving threatening calls, anonymous WhatsApp audio notes warning of a “negative impact on your life” or visits from Hezbollah or Amal representatives asking them to stop protesting.

Mohamed Dib Othman, 29, who has been helping to organize the small but persistent demonstrations in Baalbek, said his car windows had been smashed after the first day of protests in mid-October. Acquaintances warned him that party affiliates were branding him a traitor in WhatsApp chat rooms.

“The revolution is our only hope. If it gets crushed, we’re finished,” said Mr. Dib Othman, who said he was shut out of all 36 government jobs he had applied to after graduating from university because he lacked party connections.

But he was hopeful something had shifted. “When Nasrallah criticized the revolution, the mask fell off for everyone,” he said.

Perhaps Hezbollah’s most effective anti-protest tactic has been to insinuate that the protests are the product of a foreign conspiracy against Shiites, whose ingrained sense of grievance stretches back centuries.

Some Shiites who initially supported the uprising said they were now convinced the United States must be secretly maneuvering to pressure Hezbollah and its Shiite partners in Iran and Iraq: how else to explain the simultaneous uprisings in all three countries?

Such suspicions only hardened after the American killing of Maj. Gen. Qassim Suleimani, a top military leader in Iran, in early January.

“They’ve been trying to defeat Hezbollah for years,” said Ahmad, a butcher in Beirut who did not want his last name used because he did not want to offend customers of other sects.

But when the protesters are friends, neighbors and relatives, they are not easily labeled foreign tools. They also include former fighters and relatives of those known as martyrs who died fighting with Hezbollah, who are hard to dismiss.

Among them was Rabih Tleiss, a Hezbollah member until 2013, whose cousin and brother-in-law died fighting for Hezbollah in Syria.

Sitting with other protesters in Baalbek, Mr. Tleiss pointed at the other Shiite men in the room, one by one.

“Are you working?” One man shook his head.

“Are you working?” Another headshake.

Jad Jarjoui, 20, a protester in Tyre who volunteered with Hezbollah in Syria for a few months and is now unemployed, said he had kept protesting despite his family’s opposition and a visit from a local Hezbollah leader. He said he had not been directly threatened, but that an unknown assailant had stabbed him in the arm one night.

“My father asked why I’m getting myself into trouble,” he said, “but I told him I’m doing the right thing.”

Mr. Jarjoui remained loyal to Hezbollah’s cause, he said, just not its domestic politics. “The resistance is above all suspicion, but I’m against members of Parliament in the party.”

Still, the longer the protests go on without substantial political change or economic succor, the more fatigue and fatalism have crept in.

Ihab Hassane, 29, a Shiite from Tyre who had been protesting since Day 1, said he had lost hope for swift change. He was planning to leave the country.

But he believed the protesters had notched at least one accomplishment.