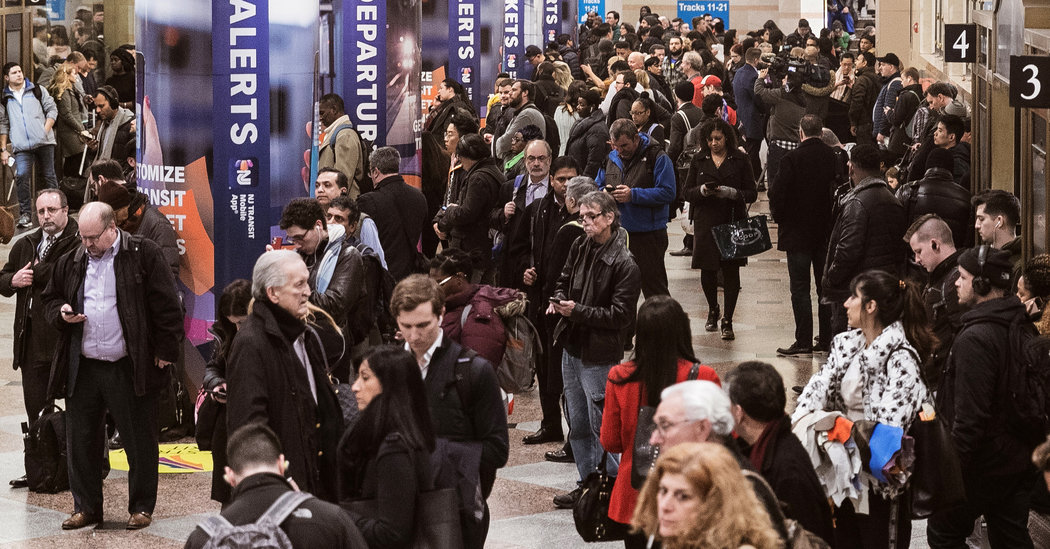 The evening commute was thrown into chaos for thousands of New Jersey-bound riders on Monday after a power failure disabled a train going into Pennsylvania Station in Manhattan, creating a cascade of cancellations and delays at North America’s busiest train hub.

Around 8:30 p.m., four hours after the problems began, frustrated commuters were still milling around Penn Station, their eyes glued to digital schedule signs in hopes of getting an indication of when they might be able to make their way home.

Miosotti Mendez was among those who were waiting. Ms. Mendez said that she had stayed at work later than usual when she learned that her New Jersey Transit train would be delayed.

“Now it’s 8:22 p.m. and my train is still not here,” she said as a crush of people ran toward a track where a train bound for Newark had been announced. “I can’t even take this train, this only takes me to Newark. I’m going to Wood-Ridge.”

Daniel Kim, who was holding a weekend bag and pushing his headphones into his ears, was another frustrated rider.

“They canceled my train and now my other train is on standby,” he said. “This happens like two to three times a year. It’s probably not worth my money.”

Power was lost on the tracks just outside the station at around 4:30 p.m., according to Amtrak, which owns Penn Station. By 8 p.m., a spokeswoman said, power had been restored and the railroad was “actively investigating what caused the power outage.”

About 15 Amtrak trains were affected, the spokeswoman said.

Sarah Glatt had come into New York earlier in the day for a meeting. She returned to Penn Station at around 5:40 p.m. for her 6 p.m. train to Boston and had been waiting since then.

“They said they wouldn’t cancel the train, and that’s my small hope to make it home to my daughters,” Ms. Glatt said as she sat on the floor. “This happens every time I come to New York.”

New Jersey Transit, which carries about 90,000 riders through Penn Station on average each weekday, initially informed riders that the problems would delay outbound trains by up to a half-hour.

The agency subsequently canceled some trains and said that others would be delayed by up to 90 minutes. Midtown Direct trains were diverted to Hoboken, and New Jersey Transit rail tickets and passes were being honored on PATH trains in Newark and Hoboken and at 33rd Street in Manhattan, as well as on agency buses.

For New Jersey Transit riders, delays and cancellations have become common in recent years. In one week last summer, the railroad canceled more than 60 trains, many of them during the morning or evening rush hours.

New Jersey Transit has sometimes blamed the problems on a nagging shortage of crews to operate trains. In other instances, officials have blamed “equipment availability,” or a lack of trains needed to carry riders.

Penn Station is plagued by aging tracks, narrow platforms and bottlenecks that riders encounter when trying to get to their train, causing safety concerns. Years of putting off repairs contributed to two derailments in 2017, forcing Amtrak to undertake an emergency repair program and cut back service for months.

Last month, Gov. Andrew M. Cuomo of New York, a Democrat, outlined a plan to add eight tracks to the station’s existing 21. The new tracks would allow the remodeled complex, which also serves the Long Island Rail Road and the city’s subways, to accommodate 175,000 riders of top of the 650,000 daily travelers who flow through it now, Mr. Cuomo said.

Standing in the way of Mr. Cuomo’s vision is the failing condition of the station’s 110-year-old rail tunnels, and a lack of progress on a $11.3 billion plan to build new ones. That plan, known as Gateway, is mired in a political standoff between President Trump and Democratic leaders on both sides of the Hudson River.