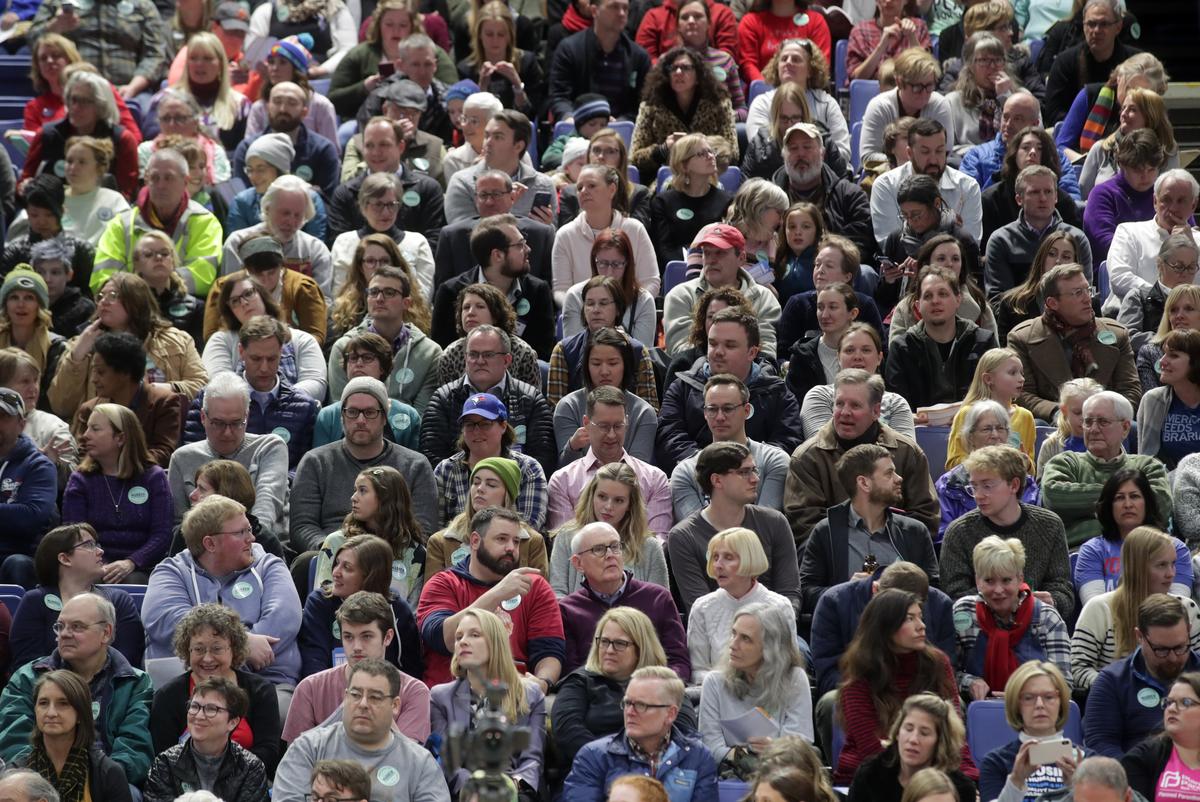 DES MOINES, Iowa (Reuters) – The U.S. Democratic presidential nominating race got off to a slow and rocky start in Iowa on Monday, as the results of the state’s caucuses were delayed for hours while party officials double-checked “inconsistencies” in the initial count.

Voters poured into more than 1,600 schools, community centers and other public locations around Iowa, the first state to choose a November election challenger to Republican U.S. President Donald Trump.

The Iowa state party said it was doing “quality checks” on the results and found “inconsistencies in the reporting” of the data from the caucus sites.

“In addition to the tech systems being used to tabulate results, we are also using photos of results and a paper trail to validate that all results match and ensure that we have confidence and accuracy in the numbers we report,” state party spokeswoman Mandy McClure said.

“This is simply a reporting issue, the app did not go down and this is not a hack or an intrusion,” she said, adding the underlying data and paper trail were sound.

Iowa voters were meeting to render judgment on a field of 11 Democratic contenders led by front-runners Senator Bernie Sanders of Vermont and former Vice President Joe Biden, who have battled for the top in recent Iowa opinion polls.

Long lines and heavy crowds were reported in some locations, but doors to the caucus sites closed and the process began at 7 p.m. CST (0100 GMT on Tuesday).

Mostly white, rural Iowa is the first test in the state-by-state battle to pick a Democratic nominee to face Trump in the Nov. 3 election. After more than a year of campaigning and more than $800 million in spending, the results in Iowa will begin to provide answers for a party desperately trying to figure out how to beat the businessman-turned-president.

Voters are pondering whether to back someone with appeal to independents and disaffected Republicans, like moderates Biden, Pete Buttigieg, the former mayor of South Bend, Indiana, and Senator Amy Klobuchar of neighboring Minnesota, or someone who energizes the party’s liberal base and brings out new voters, like progressives Sanders and fellow Senator Elizabeth Warren of Massachusetts.

At the caucus sites, voters gathered in groups by candidate preference in a public display of support. If a candidate did not reach a threshold of support of 15% of voters, the total needed to be considered viable, that candidates’ supporters were released to back another contender, leading to a further round of persuasion.

“We need a candidate who can bring our party together,” Warren told a caucus at a high school in Des Moines. “We need all our Democrats united. Most of all, you need someone who’s going to inspire people: Democrats, independents and Republicans.”

Even if one candidate wins by a commanding margin in Iowa, Democrats may still lack clear answers as the race moves on to the other three early voting states of New Hampshire, Nevada and South Carolina later in February.

Whoever remains in the race by Super Tuesday on March 3, when 15 states and territories vote, will also confront billionaire former New York Mayor Michael Bloomberg, who is skipping the early states in favor of focusing on states rich in delegates to the Democratic National Convention in July.

Sanders, who finished in a virtual dead heat with eventual nominee Hillary Clinton in Iowa during his first presidential run in 2016, has surged in many Iowa polls to move just ahead of Biden.

Warren and Buttigieg remain within striking distance, and many polls show a big bloc of undecided Iowa voters, creating the potential for upsets and late surges.

GRAPHIC: Calendar of each state’s Democratic nominating contest and its allocated delegates – here

Attendees sit in a gymnasium during a caucus in Des Moines, Iowa, U.S., February 3, 2020. REUTERS/Jonathan Ernst

Iowa state party officials are expecting a record turnout, exceeding the nearly 240,000 voters who attended the caucuses in 2008 amid the excitement over Barack Obama’s first presidential candidacy.

Beating Trump was the prime consideration for voters as they entered the caucus, according to a poll of 1,512 Iowa Democrats conducted by the National Election Pool, with 62% saying they want someone who can beat Trump and 36% wanting a nominee who agrees with them on major issues. [L1N2A4029]

The entrance poll also found 57% backed a government-run healthcare plan similar to the Medicare for All proposals of Sanders and Warren, a potentially good sign for them.

During final rallies across the state, all the contenders made their cases for why they would be the best choice to beat Trump.

Biden touted his experience after decades in elected office, most notably a track record of achieving progressive goals through bipartisan relationships with lawmakers.

“He is scared to death to run against me, and he has good reason to be concerned,” Biden said of Trump during a rally in Muscatine, Iowa. Accompanied by his wife Jill, Biden greeted supporters and said he was “feeling good” as he delivered pizza to volunteers at a field office in Des Moines on Monday.

Sanders has shrugged off a barrage of attacks from rivals who warn the self-identified democratic socialist would doom the party to defeat against Trump, pointing to polls that show him beating the president.

Warren, who has been slipping in polls, made explicit appeals to women voters.

Buttigieg promised to usher in a new era of optimism in politics and cast himself as an outsider who has not taken part in Washington’s gridlock and is attracting bipartisan support.

“We’re seeing folks come out of the woodwork. Not just diehard Democrats, but some more independent-minded folks, disaffected Republicans looking for a change, wanting to turn the page,” Buttigieg told Fox News Channel on Monday.

Minnesota’s Klobuchar may have the most to lose in neighboring Iowa, where she has spent most of her campaign time and resources, but said she could win conservative areas that Trump captured in 2016.

Republicans were also holding Iowa caucuses on Monday, with Trump, who has around 90 percent support in his party, declared the projected winner by various media outlets.