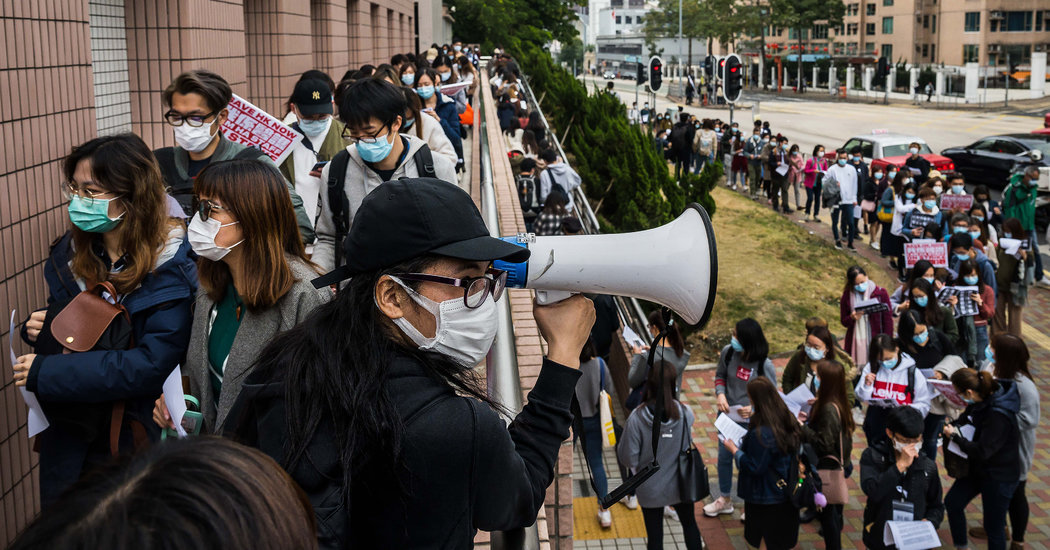 The death from the outbreak was the first in Hong Kong, a semiautonomous Chinese territory, and the second outside mainland China. A man in the Philippines who was from Wuhan, China — the epicenter of the outbreak — also died from the coronavirus, Philippine officials said Sunday.

The man who died Tuesday had traveled by train to Wuhan on Jan. 21 and had returned to Hong Kong two days later, the Hong Kong government said in a statement.

The case raised further alarm for the possibility that the disease was transmitted within the man’s household: His mother, who did not travel to Wuhan, later contracted the virus. The man’s wife and two children and a domestic helper who worked for him are being quarantined.

Though Hong Kong shares a landmass with mainland China, the territory has not been hit nearly as hard by the outbreak, with just 15 confirmed cases. A neighboring city just across the border, Shenzhen, has had hundreds of cases.

The Hong Kong government has been under pressure to close its borders to mainland China. All but three border checkpoints out of 16 were shut on Monday, but the remaining entry points can still admit thousands of mainland Chinese visitors per day.

More than 2,500 medical workers went on strike Monday to demand a fully closed border. They said they were unsatisfied by the partial closings, and many continued to strike on Tuesday.

Across the border in China, there were 20,438 confirmed infections as of Monday, the government said on Tuesday. During the SARS outbreak, China had 5,327 cases, according to the World Health Organization.

By convening a second special meeting of the Communist Party’s top political body on Monday, China’s leader, Xi Jinping, signaled a more assertive strategy for dealing with the coronavirus epidemic after days of seeming to retreat from center stage.

Mr. Xi, presiding over a meeting of the Politburo Standing Committee, said that the crisis was “a major test of China’s system and capacity for governance,” according to state-run media reports. His comments underlined the scale of the crisis and represented at least an implicit acknowledgment that the system has fallen short in some areas.

Mr. Xi warned officials not to resist orders or to allow “bureaucratism and the practice of formalities for formalities’ sake” slow government efforts to bring the outbreak under control. “Those who disobey the unified command or shirk off responsibilities will be punished,” Mr. Xi said, the Xinhua news agency reported. Only a handful of local officials have been relieved of their duties so far, but more are expected to fall.

The meeting was only the second public appearance by the Chinese leader since the local government in Wuhan took the extraordinary step of locking down the city on Jan. 23, an order that almost certainly was approved at the highest levels in Beijing. Mr. Xi dispatched the country’s No. 2 leader, Premier Li Keqiang, to Wuhan more than a week ago, when the death toll stood at 106. By Tuesday, the toll in China was more than 420.

The Politburo Standing Committee, which includes Mr. Xi and the six other most powerful party officials, also indicated that possible changes in national policy were under consideration. Xinhua reported that the committee called for an overhaul of environmental sanitation standards and for a crackdown on the trade in wildlife, which has been identified as the probable source of the outbreak in a wholesale market in Wuhan.

Macau will close all casinos for half a month.

Macau’s top official said on Tuesday that the government would shut down the city’s lucrative casinos for half a month to combat the coronavirus outbreak, a drastic move that will further weaken the Chinese territory’s already ailing economy.

The semiautonomous enclave, which neighbors Hong Kong and is the world’s largest gambling hub, has reported 10 confirmed cases of the coronavirus, with a worker in the gambling industry among those infected. The shutdown was announced on Tuesday by Ho Iat Seng, the chief executive.

Macau’s casinos have struggled as the coronavirus outbreak led to growing travel restrictions for visitors from the mainland. Macau, the only place in China where casino gambling is legal, derives a significant portion of its revenue from gamblers from the mainland.

They are from Wuhan, and they are China’s new pariahs.

One person was turned away by hotel after hotel after he showed his ID card. Another was expelled by fearful local villagers. A third found his most sensitive personal information leaked online after registering with the authorities.

These outcasts are from Wuhan, the capital of Hubei Province, epicenter of the rapidly spreading coronavirus outbreak. They are pariahs in China, among the millions unable to go home and feared as potential carriers of the mysterious virus.

All across the country, despite China’s vast surveillance network with its facial recognition systems and high-end cameras that is increasingly used to track its 1.4 billion people, the government has turned to familiar authoritarian techniques — like setting up dragnets and asking neighbors to inform on one another — as it tries to contain the outbreak.

It took the authorities about five days to contact Harmo Tang, a college student studying in Wuhan, after he returned to his hometown, Linhai, in eastern Zhejiang Province.

Mr. Tang says he was already under self-imposed isolation when local officials asked for his personal information, including name, address, phone number, identity card number and the date he returned from Wuhan.

Local officials returned a few days later to fasten police tape to his door and hang a sign that warned neighbors that a Wuhan returnee lived there. The sign included a hotline to call if anyone saw him or his family leave the apartment.

“In reality there’s not much empathy,” he said. “It’s not a caring tone they’re using. It’s a warning tone. I don’t feel very comfortable about it.”

No reported cases in Mexico, but Uber was taking no chances.

Even in countries still seemingly untouched by the outbreak, precautions against the disease are being ramped up. That was the situation in Mexico over the weekend.

There are no confirmed cases of coronavirus in the country, according to the United States Centers for Disease Control and Prevention. But on Friday and Saturday, Uber temporarily suspended the accounts of 240 users in Mexico City to guard against the spread of the virus, the ride-hailing company said.

Uber made the decision after learning that a person with the virus traveled from Los Angeles to Mexico City last month and rode with two Uber drivers there, a company spokesman said.

The Mexico City Health Department alerted Uber, and Uber suspended the drivers, as well as other passengers they had picked up.

“Out of an abundance of caution, we temporarily suspended the accounts of two drivers who had transported the individual, as well as approximately 240 other users who had been in contact with those drivers,” the spokesman, Andrew Hasbun, said in a statement. “We have a dedicated online portal for public health authorities to contact Uber for information about riders and drivers, and we will take action on any user accounts on the recommendation of those authorities.”

The coronavirus may delay hard-fought U.S. trade victories in China.

The virus, which has killed more than 420 people in China, is taking a heavy toll on the country’s economy by halting factory work, grounding flights and disrupting supply chains. It is also likely to slow China’s progress in meeting the commitments it agreed to as part of the initial trade deal that the Trump administration signed with Chinese officials last month.

Under the terms of the agreement, China has pledged to purchase over the next two years an additional $200 billion of American goods, including soybeans, machinery and energy products.

The Chinese government is also supposed to act quickly to open its markets for American agricultural and financial firms, making major reforms to those sectors within months.

But with factories and stores throughout China shuttered and government officials focused on containing the virus, Beijing will have less capacity to meet President Trump’s terms, analysts say.

Karthik Natarajan, a supply chain expert at the University of Minnesota, said the closing of cities and factories was severely affecting manufacturing and travel.

“Parts of the deal are set to go into effect by mid-February, but with the Chinese government intently focused on responding to the outbreak, developing action plans to meet the trade deal commitments might take a back seat,” he said.

Australia evacuated more than 200 citizens from Wuhan, and then quarantined them.

A planeload of Australians evacuated from China’s Wuhan city arrived in the Indian Ocean territory of Christmas Island, where they are to be quarantined, Reuters reported on Tuesday.

The Qantas Airways 747 carrying 243 passengers, 14 crew members, four pilots and officials from the Department of Health landed at a military air base about 700 miles north of Perth. The passengers were then transferred to two smaller planes bound for Christmas Island, according to the Australian Broadcasting Corp.

The first of the chartered flights landed on the island at 9 p.m. Monday. Officials were not immediately available to confirm the arrival of the second charter flight.

Another evacuation flight from Wuhan chartered by Air New Zealand, with 70 New Zealanders and an unspecified number of Australians on board, was expected to arrive in Auckland on Tuesday, The New Zealand Herald reported.

There were 600 Australians registered in the Hubei region as of last week, and the Australian government has said it will consider further evacuations if needed.

Australia on Saturday followed the United States in barring entry to all foreign citizens traveling from mainland China and raised its travel warning for China to the highest level, advising people against visiting the country.

A steady climb in infections in China, but some encouraging news, too.

The death toll from the new coronavirus has exceeded that of the severe acute respiratory syndrome outbreak in 2002 and 2003 in mainland China. But the number of people who have recovered nationwide has also risen in recent days, suggesting that the new virus’s fatality rate is relatively low.

China’s Health Commission reported on Tuesday that there were 632 recoveries and more than 420 deaths nationwide. During the SARS outbreak, 349 people died in mainland China.

Health experts say they are encouraged by the steady rise in the number of recoveries. They take it as evidence that the treatments meted out have been effective and that the virus does not appear to be as deadly as SARS.

SARS had a mortality rate of 9.6 percent, and about 2 percent of those reported to have been infected with the new coronavirus have died.

China first announced an outbreak in the city of Wuhan on Dec. 31. The authorities later began to place the city and much of the surrounding Hubei Province — home to tens of millions of people — under lockdown.

Reporting was contributed by Paul Mozur and Kate Conger.