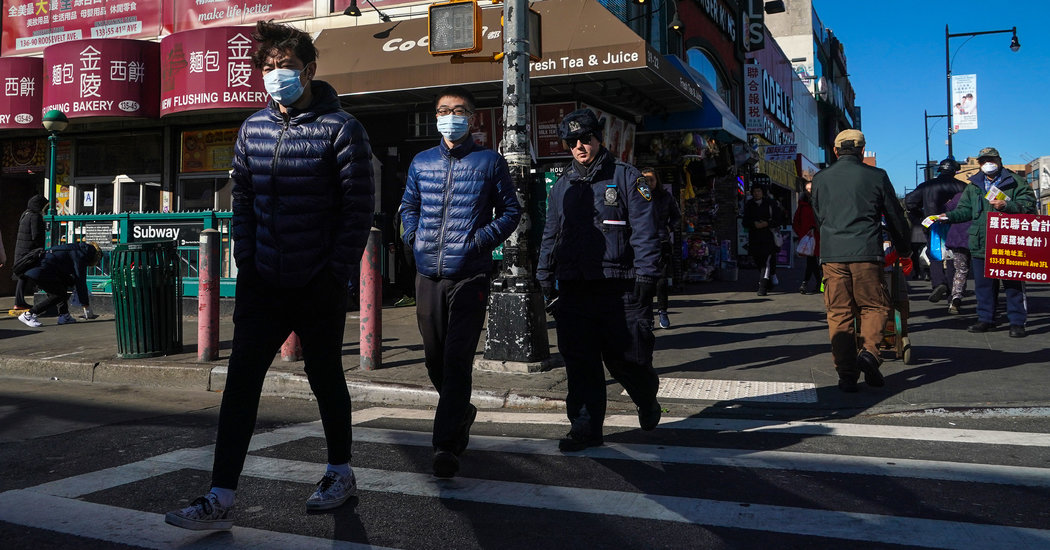 Weather: A chance of light rain until about noon. The high will be in the mid-50s.

[Read the latest on coronavirus in New York: Without Chinese tourists, business sags.]

Last week, we told you that the city’s top health official said it was “inevitable” that the new strain of coronavirus, which began with an outbreak in China and has been spread by travelers across the globe, would arrive in New York.

Now, three patients in the city are being tested for the coronavirus.

[Coronavirus in New York: What we know so far.]

Here is the latest:

One patient is being treated at Bellevue Medical Center, and had a “fever, cough and a runny nose,” according to the city’s health commissioner, Dr. Oxiris Barbot.

Two others are being treated at hospitals in Flushing, Queens. They are both over 60 years old, with symptoms that include fever, coughing and shortness of breath, Dr. Barbot said.

All three had recently been in China.

The new coronavirus causes a respiratory illness whose symptoms include fever, cough and shortness of breath. Initially, it may resemble flu or a bad cold.

The virus can incubate for as long as two weeks before a person shows symptoms. During that time, there is an indication that some people can spread the virus to others.

For now, local health departments lack the ability to test for the virus, so samples have to be sent to the Centers for Disease Control and Prevention in Atlanta. The turnaround time for results is 36 to 48 hours at a minimum.

In China, the number of cases has been surging since the virus began to spread late last year. Today, there are more than 20,400 confirmed cases in China, with nearly all of the more than 420 deaths in that country.

City officials have tried to reassure the public that the risk to New Yorkers is low and that the level of preparedness is high.

Still, in trying to assuage fears, city officials have at times given different guidance than scientists at the C.D.C.

At a news conference, Mayor de Blasio said transmission of the coronavirus required “substantial contact with someone who already has it,” adding that “you don’t get it” from touching a surface.

The C.D.C., however, has more cautious advice. It said it’s not clear if someone can get the virus “by touching a surface or object that has the virus on it and then touching their own mouth, nose or possibly their eyes.”

Open House New York hosts a presentation and conversation on accessibility in the city’s transit system at John Jay College in Manhattan. 6:30 p.m. [$15]

CBS All Access presents a sneak peek of the true crime series “Interrogation,” followed by a Q. and A. with the show’s creators as well as the actors Peter Sarsgaard and Kyle Gallner, at Nitehawk Prospect Park in Brooklyn. 7:15 p.m. [Free]

Events are subject to change, so double-check before heading out. For more events, see the going-out guides from The Times’s culture pages.

And finally: The new voice of city food vendors

Running a street food cart is backbreaking work: dragging around a heavy cart, then standing behind it for hours on end.

Quitting would seem a gift to aching feet.

It hasn’t turned out that way for Mohamed Attia, who left his smoothie and halal-chicken-over-rice carts last year to become director of the Street Vendor Project, a part of the nonprofit Urban Justice Center.

The group lobbies for the 20,000 or so vendors, most of whom are immigrants, who sell food, jewelry, clothing and just about everything else in New York City.

Work for Mr. Attia is still an endurance run. He’ll bustle around Wall Street, teaching the people who sell $1 coffees and buttered rolls how to avoid fines for stationing carts too close to a curb.

He’ll put on a suit and pace the floors of City Hall, where City Council members are now considering a bill that would increase the number of vending permits for the first time in four decades.

Mr. Attia took the reins of the Street Vendor Project just around the time a bystander’s video of an encounter between the police and the “churro lady,” Elsa Morochoduchi, went viral.

He has used the resulting uproar to bring new attention — and a new assertiveness — to the 19-year-old organization.

“Vendors do this because they need a job,” he said. “It gives them the economic mobility to work, to save money, to start the American dream.”

I eventually found myself facing a woman who had her back to the door and her chin dropped to her chest. A two-lane highway of gray ran over the crown of her head. To either side was a fading chestnut brown.

The woman looked up and into my eyes.

“Do you think I should stop dying my hair?” she said.

“Yes,” I replied after an appropriate two-second assessment. “I do.”

“Are you sure?” she asked. “What about the color of my skin? Would it look O.K. with gray hair?”

“It will look beautiful,” I said after another quick assessment.

“Are you sure?” the woman asked a second time.

We pulled into the next station and the doors opened behind her. She thanked me, turned and walked away.

New York Today is published weekdays around 6 a.m. Sign up here to get it by email. You can also find it at nytoday.com.

We’re experimenting with the format of New York Today. What would you like to see more (or less) of? Post a comment or email us: nytoday@nytimes.com.