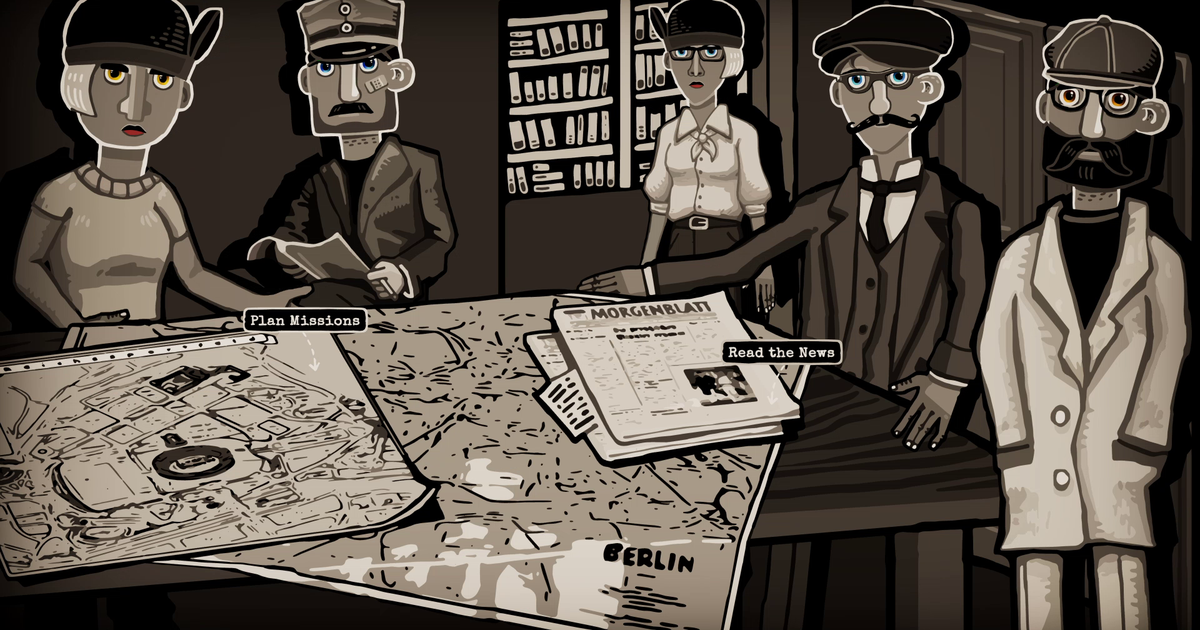 There’s a quote that appeared at the end of my Through the Darkest of Times playthrough and it’s worth committing to memory during this divisive moment in history. The words come from painter and Holocaust survivor Max Mannheimer, who worked to educate the public on the horrors wrought by the Third Reich in the aftermath of World War II.

I know I’m not alone when I say this, but I have a strange relationship with World War II stories as an American Jew whose family roots were directly influenced by the Holocaust. Whether it’s a movie, TV series, or video game, I tend to frame them against my own deeply personal understanding of the war, which is informed as much by the stories I used to hear from family as it is by my former Hebrew school’s Holocaust class.

The hours I spent in that fluorescent-lit classroom watching archival footage from the Nazi death camps aren’t easily forgotten. Once you’ve seen the ovens where Jews were burned, the showers where they were gassed, and the lines of skeletal prisoners standing in front of corpse-filled mass graves as they wait to be executed, it stays with you like emotional scar tissue.

I tend to frame stories like this against my own deeply personal understanding of World War II.

Through the Darkest of Times doesn’t dare turn those death camps into a game, thanks be. It’s not even focused on the Jewish experience during World War II, not directly. Instead, you’re asked to lead a German resistance group in the years before and during the war. It’s a game of strategic decision-making, with a story that’s shaped by your choices.

In my case, I managed to keep my group together through the late days of the war in 1945. But with a key member arrested by the Gestapo and our morale completely in the toilet, we disbanded and the game ended. Text on the screen told me what happened next to my small squad of resistance fighters.

The Mannheimer quote appeared last, putting a period on the “Meier-Zielke-Gruppe” story. I’m not ashamed to admit it made me cry. It wasn’t the loss of my fictional resistance group or even the sentiment expressed in the quote that prompted this sudden outburst of emotion. It was the heavy weight of having taken this long journey filled with grim specifics and seeing how fruitless it all was.

All of those millions of people still died. For any of the resistance efforts, real and fictional, the German public that supported Hitler was conned into believing the rumored atrocities of the Holocaust were just that: A fiction. Some willingly fooled themselves. Others opted for blind ignorance, because it’s hard to stand up for what’s right in a police state.

You might want to believe that everyone has their breaking point where there’s no choice left but to resist. That’s simply not true, though. Hitler was popular and a powerful propaganda machine led common citizens to believe that Germany was winning. A resistance movement that started as an apparent majority dwindled more and more because of how the people in power wielded fear as a weapon.

I cried because, as a human being with an awareness of how the past informs the present, Through the Darkest of Times puts all of this in front of you and then dares you to ignore the obvious connections to fascism’s 21st century mainstream comeback. The sense of desperation has an impact because whether or not you want to admit it, we’re living in desperate times.

I don’t know if that was the intent, but the occasional dialogue references to familiar modern touchstones like “fake news” can’t be ignored. Did German resistance fighters really refer to Joseph Goebbels’ propaganda operation as fake news? Does it even matter, when the ties that bind 1940s Germany to the United States in 2020 are so staggeringly obvious?

I didn’t actually find what you might consider to be the meat of Through the Darkest of Times all that engaging. You spend each turn dispatching your group’s members on one mission or another scattered across Berlin. There’s a whole skill and attribute system governing the likelihood of success or failure (and a separate measure of how likely you are to attract attention). It’s fine, but the underlying systems that inform your strategic decision-making are too opaque.

So I ended up relying on my gut most of the time instead. That got me mildly invested in my group’s direct resistance efforts, but so many of the missions are meant to be repeated and so much text is reused again and again that trying to thread together a story in your head gets dull fast. What really kept me playing were the many narrative interludes and nods to the past.

Through the Darkest of Times is as much a history lesson as it is a video game. Between each turn you’re confronted with newspaper headlines that follow the basic track of history. I learned things here that I hadn’t known before about the circumstances that led to Hitler’s ascent and the public spread of lies that kept him in power.

Through the Darkest of Times is as much a history lesson as it is a video game.

Even more compelling are the slice-of-life interludes that show us what life was like on the ground for your average German citizen in 1930s and 1940s Berlin. During the pre-war period, I snuck into a Romani concentration camp and snapped pictures of the violence I witnessed there. I met with a fellow resistance leader in pre-occupation Paris, then reconnected with her almost a decade later as she served as the go-between for a Nazi officer hoping to bring down Hitler.

In the latest days of the war, after regular bombings had turned Berlin into an active war zone, I met a young man trying to hide his “Jew” patch while we both huddled in an air raid shelter. In this and all the other moments like it, the gameplay turns into a grim choose-your-own-adventure. I helped the young man, shared some of my hard-fought bread with him, and in the process sacrificed some much-needed supplies. Could that be why my game ended a short time later? Were those shared scraps of bread the key to my group’s undoing?

I don’t know, and I don’t want to know. Through the Darkest of Times worked best for me when I let go of my analytical self and stopped trying to understand the game’s underlying mechanics. I can’t really say that I liked playing it, but I’m still glad I did.

If you’re here to read a review… well, I’m sorry to disappoint. I don’t have the ability to grapple with this game on that level; the story is something I feel far too deeply. When I read about the fictional players assembled around my resistance group, all I see is my grandmother and her parents fleeing a pre-war Poland, or her long-lost half-brother who went to the death camps and miraculously survived. Or any of the countless souls whose gaunt faces stared back at me from the TV in my Hebrew school classroom.

I don’t see myself coming back to Through the Darkest of Times again, but I desperately wish we lived in a world where more people could be receptive to the message it carries. Mannheimer died in 2016, just a few months before the U.S. election. He didn’t live long enough to remind us of what he once said about responsibility. So instead we have a German indie studio called Paintbucket Games picking up that baton.

I’m not responsible for the end of my virtual resistance group, but Through the Darkest of Times is a grim reminder to us all of what can happen if we ignore the lessons of the past. Never again.