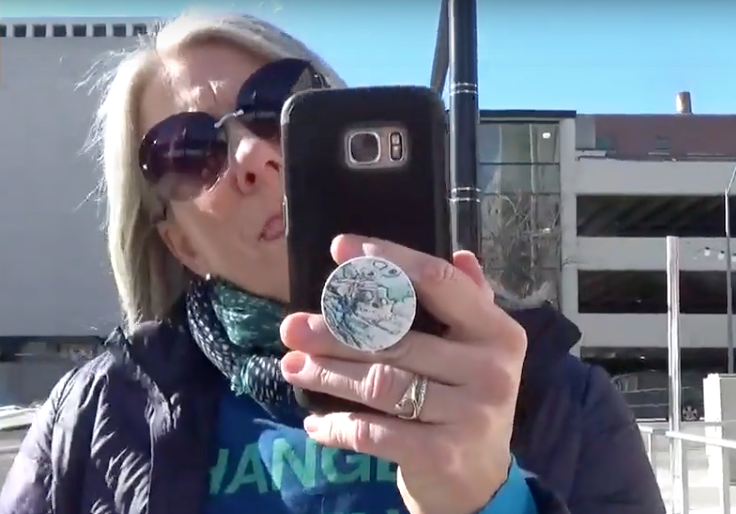 Kimberly Graham, an Iowa Democratic Senate candidate, confronted a tracker from America Rising over the weekend and threatened to serve her with a lawsuit for harassment.

“Where’s the best place to serve you with a lawsuit?” Graham said after storming up to the tracker, according to video obtained from the conservative group. “Is that your home or do you have an office?”

The confrontation occurred after Graham and her supporters attended a climate change parade in Des Moines, Iowa. The tracker had been recording Graham as she marched in the parade, a standard campaign practice from political groups on both sides of the aisle.

Graham told the tracker she planned on suing for “harassment.”

Graham had already confronted the tracker earlier in the day, putting her phone in the tracker’s face and asking her repeated questions about the environment. Video of that interaction shows the tracker asked Graham to take a step back during the confrontation, which was initiated by Graham.

“If you could take a step back—I wasn’t getting in your personal space, but you were getting in mine,” the tracker said after Graham reached especially close with her phone.

Graham threatened to call the police after the tracker declined to stop recording.

“I’d like you to put the camera away,” Graham said toward the end of the first interaction.

“That’s alright, I’ll just call the police because there are plenty of them around,” Graham said.

“Okay, great, they’ll talk to you,” the tracker replied before Graham walked away.

Graham’s campaign did not respond to emailed questions on whether it will be filing any lawsuits.

Paul Crookston is the deputy war room director at the Washington Free Beacon. He was previously a Collegiate Network fellow at National Review. A 2016 graduate of Gordon College in Wenham, Mass., he served as the managing editor of the Tartan campus newspaper. He is originally from Tampa, Fla., but he still roots for Dad’s Ohio teams. His Twitter handle is @P_Crookston. He can be reached at crookston@freebeacon.com.