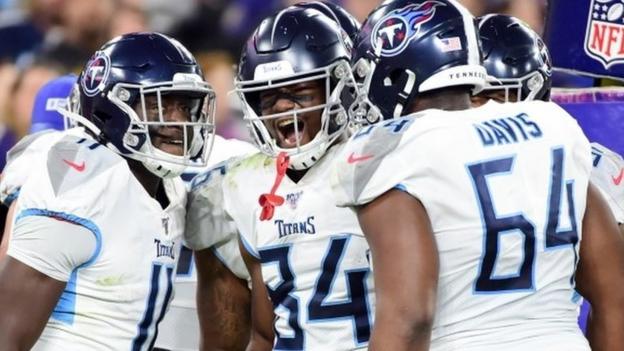 The Tennessee Titans shocked the Baltimore Ravens and the San Francisco 49ers also advanced in the NFL divisional play-offs.

Ryan Tannehill passed for two touchdowns and ran for another as the Titans beat the AFC top seeds 28-12.

They will meet the winners of Sunday’s Kansas City Chiefs-Houston Texans game for the AFC title on 19 January.

The 49ers beat the Minnesota Vikings 27-10 with Tevin Coleman rushing for 105 yards and two touchdowns.

San Francisco will now host the Green Bay Packers or the Seattle Seahawks for the NFC title, also on 19 January.

The winners of the AFC and NFC Championship games will advance to Super Bowl 54 in Miami on 2 February.

Running back Derrick Henry rushed for a franchise post-season-record 195 yards on 30 carries and also passed for a touchdown as the Titans brushed aside their hosts.

“We’re just going to work and believe in each other. That’s our mentality, to come out here and work. That’s our mindset, focus on business,” said Henry.

Baltimore quarterback Lamar Jackson, tipped to be the league’s Most Valuable Player, was intercepted twice and lost a fumble.

The 49ers never trailed, with their defence holding the Vikings to 21 yards rushing and 147 total yards.

Minnesota had only seven first downs as Vikings quarterback Kirk Cousins could not get on track and was sacked six times.