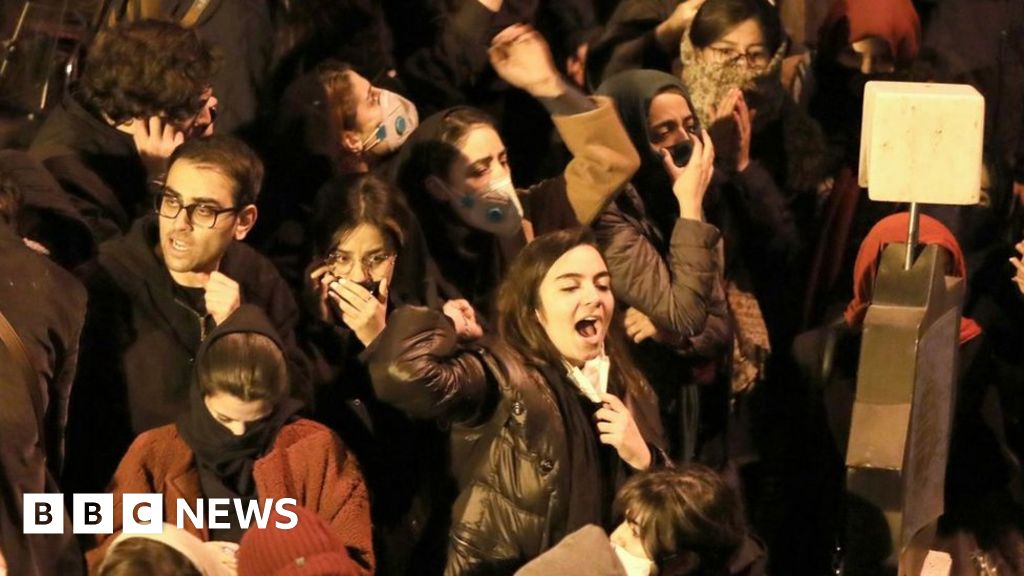 Iran’s leaders are facing growing calls to dismiss senior officials after a Ukrainian passenger plane was shot down killing all 176 people on board.

Thousands of protesters demanded accountability on Saturday after the military said it had mistakenly downed the jet, having earlier denied it.

Riot police have been deployed and there are reports that protesters have gathered for a second day of action.

The plane was shot down amid rising tensions with the US.

It happened shortly after Iran launched missiles at two airbases housing US forces in Iraq. Those strikes were a response to the US killing of senior Iranian commander Qasem Soleimani in a drone strike in Baghdad on 3 January.

Dozens of Iranians and Canadians, as well as nationals from Ukraine, the UK, Afghanistan and Sweden died on the plane.

It was en route to the Ukrainian capital, Kyiv, but came down near Imam Khomeini Airport in Tehran shortly after take-off.

Riot police have been mobilised on the streets of Tehran in an effort to deter more demonstrations.

Despite this, videos circulating online appear to show demonstrators gathering for renewed protests on Sunday morning. In some of the clips, protesters can be heard chanting anti-government slogans.

Demonstrators have gathered in other cities as well as in the capital, reports say.

A number of Iranian newspapers have covered the vigils for the victims of the disaster alongside headlines such as “Shame” and “Unforgivable”.

But there has also been praise for what one pro-government newspaper called Iran’s “honest” admission of error.

Those who decide to continue demonstrating will be mindful of the violence with which the security forces have dealt with protest movements in the past. the BBC’s Arab affairs editor Sebastian Usher says.

On Saturday, students gathered outside two universities. They initially did so to pay respect to the victims, but angry protests erupted later in the evening.

The students called for those responsible for the downing the plane, and those they said had covered up the action, to be prosecuted.

What has the international reaction been?

US President Donald Trump tweeted in both English and Farsi, saying: “To the brave and suffering Iranian people: I have stood with you since the beginning of my presidency and my government will continue to stand with you.

“We are following your protests closely. Your courage is inspiring.”

Britain, meanwhile, has condemned the arrest of the UK ambassador to Iran in Tehran as a “flagrant violation of international law”.

Foreign Secretary Dominic Raab said Rob Macaire was detained after attending a vigil where he was paying respects to victims of the crash, some of whom were British.

Mr Macaire said he left the vigil when some people started chanting and had played no part in the demonstration.

Iran on Sunday summoned the ambassador to complain about “his unconventional behaviour of attending an illegal rally”, the foreign ministry website said.

How did the Iranian admission unfold?

For three days, Iran denied reports its missiles had brought down the plane, with one spokesman accusing Western nations of “lying and engaging in psychological warfare”.

But on Saturday morning, a statement read on state TV accepted the plane had been shot down.

He said a missile operator had acted independently and alone, mistaking the plane for a “cruise missile”.

“He had 10 seconds to decide. He could have decided to strike or not to strike and under such circumstances he took the wrong decision,” Gen Hajizadeh said.

Gen Hajizadeh said the military would upgrade its systems to prevent such “mistakes” in the future.

He also said he had informed the authorities about what had happened on Wednesday, raising questions about why Iran had denied involvement for so long.

Mr Trudeau said on Saturday there must be a full investigation with “full clarity on how such a horrific tragedy could have occurred”.