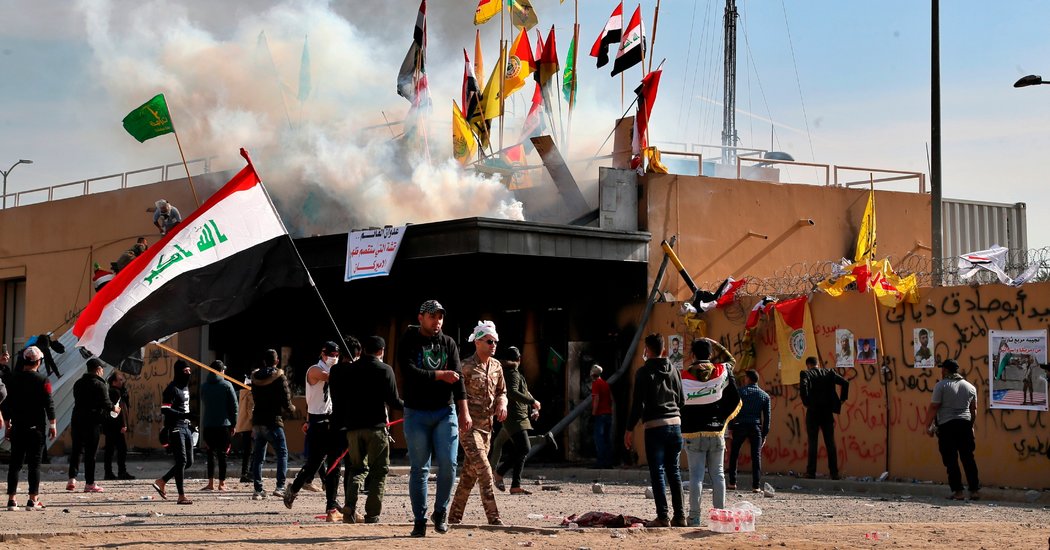 President Trump entered the new year facing flare-ups of long-burning crises with two old adversaries — Iran and North Korea — that are directly challenging his claim to have reasserted American power around the world.

While the Iranian-backed attack on the United States Embassy in Baghdad seemed to be under control, it played to Mr. Trump’s longtime worry that American diplomats and troops in the Middle East are easy targets and his longtime position that the United States must pull back from the region.

In North Korea, Kim Jong-un’s declaration on Wednesday that the world would “witness a new strategic weapon” seemed to be the end of an 18-month experiment in which Mr. Trump believed his force of personality — and vague promises of economic development — would wipe away a problem that plagued the last 12 of his predecessors.

The timing of these new challenges is critical: Both the Iranians and the North Koreans seem to sense the vulnerability of a president under impeachment and facing re-election, even if they are often clumsy as they try to play those events to their advantage.

The protests in Iraq calmed on Wednesday, and Mr. Kim has not yet unveiled his latest “strategic weapon.” But the events of recent days have underscored how much bluster was behind Mr. Trump’s boast a year ago that Iran was “a very different nation” since he had broken its economy by choking off its oil revenues. They also belied his famous tweet: “There is no longer a Nuclear Threat from North Korea.”

Today the most generous thing one could say about those statements is that they were wildly premature. Many foreign policy experts say he fundamentally misjudged the reactions of two major American adversaries. Neither seems to fear him, precisely the critique he leveled at Barack Obama back in the days when Mr. Trump declared America’s toughest national security challenges would be solved as soon as a president the world respected was in office.

The core problem may have been Mr. Trump’s conviction that economic incentives alone — oil profits in Tehran and the prospect of investment and glorious beach-front hotels in North Korea — would overcome all other national interests.

He dismissed the depth of Iran’s determination to re-establish itself as the most powerful force in the region. He also underestimated Mr. Kim’s conviction that his nuclear arsenal is his only insurance policy to buoy one of the last family-controlled Stalinist regimes.

“After three years of no international crises,” Richard Haass, the president of the Council on Foreign Relations, said on Tuesday, Mr. Trump is “facing one with Iran because he has rejected diplomacy and another with North Korea because he has asked too much of diplomacy.”

“In neither case has Trump embraced traditional diplomacy, putting forward a partial or interim pact in which a degree of restraint would be met with a degree of sanctions relief.”

Mr. Trump does not engage such arguments. He simply repeats his mantra that Iran will never be allowed to obtain nuclear weapons and that North Korea — which already has fuel for upward of 40 of them, much of it produced on Mr. Trump’s watch — has committed to full denuclearization, even though that overstates Mr. Kim’s position.

His top national security officials, starting with Secretary of State Mike Pompeo, offer a somewhat more nuanced view, saying that over time Iran will realize it has no choice but to change its ways and expressing optimism that “Chairman Kim will make the right decision and he’ll choose peace and prosperity over conflict and war.”

Increasingly, though, such lines sound like a hope, not a strategy. That is Mr. Trump’s fundamental problem as he enters 2020. He does not have a comprehensive plan to unite the nation’s estranged allies into a concerted course of action.

The absence of a common approach is hurting the most in Iran. When Mr. Trump abandoned the 2015 nuclear deal — declaring it a “terrible” piece of Obama-era diplomacy because it did not create permanent restraints on Iran’s ability to produce nuclear fuel — his aides sounded confident that Europe, China and Russia would follow suit. They did not.

Europe has flailed in its efforts to counteract American sanctions against Iran, but has insisted that the deal remains in place, even though both Washington and Tehran are violating key aspects of it.

Russia and China have taken the next step. Last week they opened joint naval exercises with Iran in the Gulf of Oman. The exercises were not militarily significant, and the three nations have plenty of differences. But to the Iranians, the military drills symbolized having two nuclear-armed superpowers on their side.

Vice Admiral Gholamreza Tahani of Iran was quoted in the Financial Times declaring that “the most important achievement of these drills” was the message “that the Islamic Republic of Iran cannot be isolated.”

It is possible that the Trump administration’s strategy will still bear fruit: Mr. Pompeo was doing everything he could in recent weeks to express support for Iranians who were mounting protests inside their own country. But the history of past protests — most notably in 2009 — offers little hope that they can threaten the government. Hundreds of protesters appear to have been killed by internal security forces this time.

The Iranians have a fine sense that “maximum pressure” campaigns work in both directions. They are vulnerable to cutoffs in oil flows. But the United States is vulnerable to highly public attacks on troops and tankers.

The attack on the outer walls of the American Embassy in Baghdad, even if short-lived, was clearly intended to send a shiver down the spine of Mr. Trump’s political aides, who remember well that a hostage crisis helped lead to President Jimmy Carter’s re-election defeat 40 years ago.

In recent months, Iran has repeatedly mounted a strike and pulled back, including its attacks on oil tankers, an American drone and Saudi oil facilities.

The Iranians have made clear what Mr. Trump needs to do to reopen negotiations: Essentially return to the deal struck with Mr. Obama, largely by lifting sanctions Mr. Trump imposed starting in May 2018. There are signs Mr. Trump is eager to resume talks, including his effort to lure President Hassan Rouhani to the phone when the Iranian leader was in New York in September for United Nations meetings.

That diplomatic initiative will doubtless continue in secret. But the Iranians have found new leverage in the ability to turn anti-Iran protests in Iraq into protests against American troops, complete with Iran’s signature “death to America” street chants.

On Tuesday, he revived an old talking point, emphasizing that he did not want a war but warning Iran that any conflict “wouldn’t last very long.”

North Korea is a harder problem because Mr. Trump had initiated a bold and imaginative diplomatic process with Mr. Kim. By breaking the mold and agreeing to meet the North Korean leader face to face, he would be the first American president to do so since the end of the Korean War.

But he made key mistakes. He failed to get a nuclear freeze agreement from the North in return for the meeting, meaning that the country’s nuclear and missile production continued to churn along.

Mr. Trump’s team, internally divided, could not back itself out of the corner the president created with his vow of no serious sanctions relief until the arsenal was disbanded. Mr. Trump did cancel joint military exercises with South Korea — over Pentagon objections — but that was not enough for Mr. Kim.

Perhaps Mr. Trump’s biggest miscalculation was over-relying on the personal rapport he built with Mr. Kim, and overinterpreting the commitments he received from the young, wily North Korean leader.

That continues. At a news conference on his way to a New Year’s Eve party at his Mar-a-Lago club, the president focused on their relationship, as if Mr. Kim’s declaration that he was no longer bound by any commitment to cease missile and nuclear testing did not exist. “He likes me, I like him, we get along,” Mr. Trump said. “He’s representing his country, I’m representing my country. We have to do what we have to do.”

Then he misrepresented the agreement he reached with Mr. Kim during their meeting in Singapore in June 2018, describing it as if it were a real estate deal. “But he did sign a contract,” Mr. Trump said of the vague declaration of principles they agreed on.

In fact, it was not a contract, it had no binding force and it referred to the “denuclearization of the Korean Peninsula.” That phrase means something very different in Pyongyang than it does in Washington: It means the North expects the United States to pull back its own nuclear-backed forces, including submarines and ships that can deliver such weapons to the peninsula.

It may be a solid-fuel, intercontinental missile, according to some experts, to show that the North has finally mastered a weapon that can be rolled out and launched with little warning. And it may carry some kind of payload to demonstrate that the country now knows how to make a warhead that can withstand re-entry into the atmosphere, a difficult technology.

But buried in Mr. Kim’s New Year’s statement was a suggestion of what he really had in mind: talks with the United States about the “scope and depth” of the North’s nuclear force. That means he really is not interested in denuclearization at all. He is interested in arms-control talks, like the United States conducted for decades with the Kremlin.

And arms control, of course, would achieve what Mr. Kim, his father and his grandfather all sought: that insurance policy for the family.