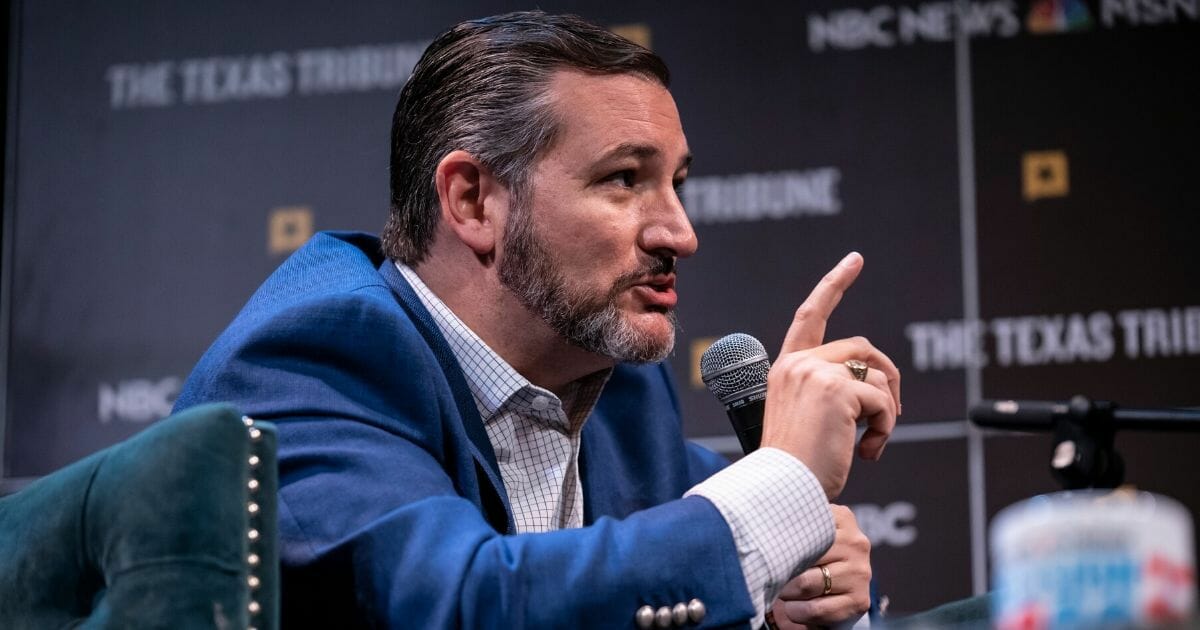 Speaking to schoolchildren during a public television program in 2014, Buttigieg said, “It’s an embarrassing thing to admit, but the people who wrote the Constitution did not understand that slavery was a bad thing and did not respect civil rights.”

“And yet they created a framework so that as the generations came to understand that that was important, they could write that into the Constitution,” he added.

“The people who wrote the Constitution did not understand that slavery was a bad thing.”

Cruz responded with a series of tweets quoting among others John Adams and Benjamin Franklin regarding slavery. Both men helped draft the Declaration of Independence, while Franklin also participated in the Constitutional Convention.

“‘Slavery is an evil of Colossal magnitude & I am utterly averse to the admission of slavery into the Missouri Territories. It being among my first wishes to see some plan adopted by which slavery in this country may be abolished by law.’ John Adams, founding father, 2nd POTUS,’” Cruz tweeted.

“‘Freedom is not a gift bestowed upon us by other men, but a right that belongs to us by the laws of God and nature.’ Benjamin Franklin, founding father, abolitionist.”

3/x “…Neither my tongue, nor my pen, nor purse shall be wanting to promote the abolition of what to me appears so inconsistent with humanity and Christianity.” Benjamin Franklin, founding father, abolitionist

“Neither my tongue, nor my pen, nor purse shall be wanting to promote the abolition of what to me appears so inconsistent with humanity and Christianity,” Cruz further quoted Franklin as saying.

Following the Constitutional Convention in 1787, Franklin became president of the Pennsylvania Abolition Society, which focused on ending slavery primarily beyond the state’s borders, since the state had already voted for abolition during the Revolutionary War in 1780.

In his last official public act before his death, Franklin released a statement in 1789 condemning slavery and urging his countrymen to work for its demise within the United States.

Most all the states north of the Mason-Dixon line had voted to abolish slavery by end of the Revolutionary War in 1783. By 1804, all the northern states had passed legislation ending slavery.

Buttigieg must not have even read the Constitution, because the document contains two decidedly anti-slavery provisions as part of a compromise between the Northern and the much more heavily slave-owning Southern states.

The Constitution specifically authorized the federal government to ban the importation of slaves in 1808 (approximately 20 years from the date the document was ratified).

Congress did so in 1808, and President Thomas Jefferson signed the bill into law.

James Madison explained in Federalist 54 that the word “person” was intentionally used in the Constitution to refer to those held in slavery to make the point they should be regarded as a “moral person, not as a mere article of property.”

A further compromise that the founders reached was counting three-fifths of the state’s slave population when calculating the overall population for determining how many representatives a state would have in Congress.

The southern states wanted to count their entire slave population for representation purposes, but the northern states did not allow it.

The impact was to lessen the number of votes slaveholding interests held the House of Representatives.

Both of these constitutional provisions were a recognition that slavery was a present evil, but not something many of the founders wanted to see continue in perpetuity.

Finally, one other triumph in the fight against slavery during the founding period took place right across the street from the Constitutional Convention in 1787.

The Continental Congress passed the Northwest Ordinance, which established the laws governing the territorial land encompassing the future states of Ohio, Michigan, Indiana, Illinois and Wisconsin. The ordinance outlawed the introduction of slavery in the territory.

Three years earlier, a similar provision failed to pass in the Ordinance of 1784 by a single vote. That ordinance was the law governing all territorial lands, before passage of the Northwest Ordinance superseded it in the northern territorial lands.

Jefferson, who had penned the provision making slavery illegal in the Ordinance, lamented, “Thus we see the fate of millions unborn hanging on the tongue of one man, and heaven was silent in that awful moment! But it is to be hoped it will not always be silent and that the friends to the rights of human nature will in the end prevail.”

Abraham Lincoln argued many steps taken by the founders showed they wanted to put slavery on the path to extinction.

Do you think Americans should be proud of the nation’s founders?

In an 1854 speech in Peoria, Illinois, Lincoln said, “The argument of ‘Necessity’ was the only argument [the founders] ever admitted in favor of slavery; and so far, and so far only as it carried them, did they ever go. They found the institution existing among us, which they could not help; and they cast blame upon the British King for having permitted its introduction.”

There seems to be this widespread belief promulgated by Democrats like Buttigieg and Rep. Alexandria Ocasio-Cortez of New York that the framers somehow were pro-slavery, forgetting that its existence in the 13 original British colonies predated the Declaration of Independence by over 150 years.

To give some perspective, that’s like blaming our current generation for any wrongful actions taken by the government during the Civil War era in the 1860s.

The founders knew slavery was evil and took significant steps to delegitimize it and place it on a path they hoped would lead to its demise.

America was founded on powerful and true ideals, and that is the reason it has become the greatest and freest country on earth.

Portions of this article first appeared in “We Hold These Truths” by Randall DeSoto.