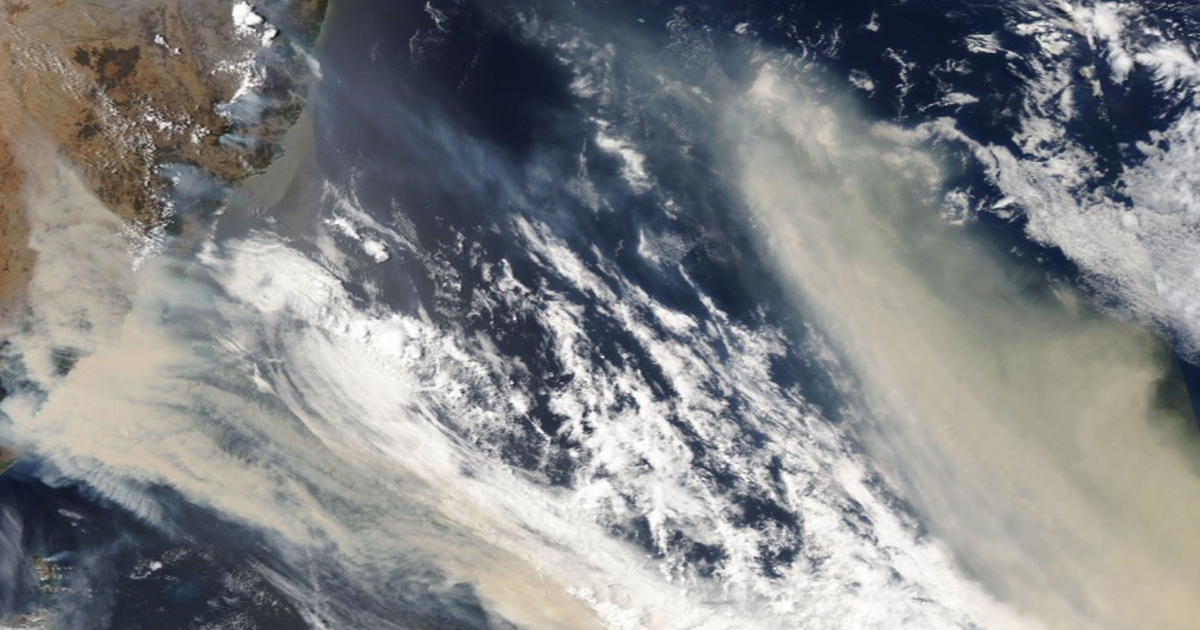 U.S. and Japanese satellites have captured the colossal smoke plume from relentless Australian fires — including a more than 1.2-million-acre megafire burning through a national park.

On Thursday, the smoke plume was some 7.3 million square kilometers (2.8 million square miles), or well over four times the size of Alaska, as estimated by Antti Lipponen, a research scientist at the Finnish Meteorological Institute.

These bushfires have been amplified by profoundly parched forests, brush, and grasslands — dried-out by a triple-whammy of record-breaking heat waves combined with drought and unrelenting winds. “The whole system was set up to burn,” David Bowman, a professor of pyrogeography and fire science at the University of Tasmania, told Mashable in December.

The resulting smoke, which recently choked the air in Australia’s most populous city, Sydney, blanketed New Zealand in smoke on New Year’s Day. The smoke has now started swirling around a low-pressure system, or cyclone, east of Australia (low-pressure zones in the atmosphere draw in wind, clouds, moisture… and whatever else is around).

Huge smoke plume showing up on GOES-17 from the Australia fires.

Currently being wrapped up by a low pressure system over the Pacific. pic.twitter.com/OUwk0I4E8P

Both scientists and Australian government agencies expect more bushfires in a hotter climate.

In 2018, Australia’s Department of Home Affairs published a report on current and future disaster risk, noting that with a “driver of a changing climate there is growing potential for some natural hazards to occur at unimagined scales, in unprecedented combinations and in unexpected locations.”

“There has been an increase in extreme fire weather.”

“The frequency and severity of fire weather has increased over recent decades,” Australia’s national science research agency, CSIRO, notes online. “We predict many regions will see a significant increase in the highest levels of fire danger in the year [sic] ahead.”

Both the land and oceans are warming around the Australian continent, according to the Australian government’s Department of Environment and associated agencies. In recent years, like Earth overall, Australia’s heating trend has amplified: January 2019 was Australia’s hottest month ever recorded. Then in December, Australia broke its record for its hottest day ever — two days in a row.

“There has been an increase in extreme fire weather, and a longer fire season, across large parts of Australia since the 1970s,” notes the Department of Environment.

As climate scientists have repeatedly shown for decades — in peer-reviewed scientific journals and deeply vetted government reports — humans are actively warming the planet by releasing prodigious amounts of carbon into the atmosphere, mostly by burning coal, natural gas, and fuels.

Australia is now one of the world’s largest exporters of coal, which emits more carbon dioxide than any other fossil fuel. “Total domestic production has more than doubled since the early 1990s and export volumes have grown strongly,” notes Australia’s central bank. Much of this coal goes to Asia.

Though Australia’s fires have created a colossal plume of smoke, choked the air with “hazardous” smoke levels, and killed firefighters and citizens alike, Australian Prime Minister Scott Morrison maintained during a press conference on New Year’s Day that the nation’s current policy to gradually reduce greenhouse gas emissions is “sensible.”

“They’re exporting coal like crazy to China,” Anthony Wexler, an air quality researcher at the University of California at Davis, told Mashable in December as he emphasized the inevitable consequences of emitting carbon.

“You’re going to have wildfires that are going to destroy your country,” he said.