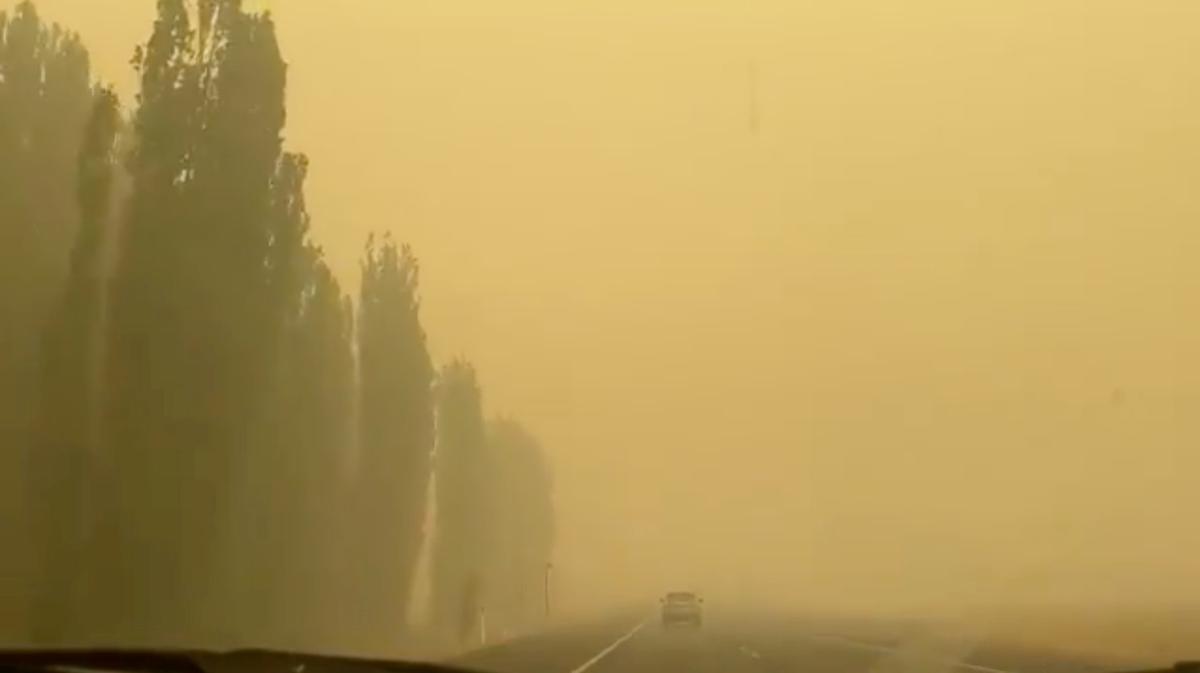 MELBOURNE (Reuters) – Tens of thousands of holiday makers raced to evacuate popular seaside towns on Australia’s east coast on Wednesday, fleeing ahead of advancing bushfires, as military ships and helicopters planned missions to rescue thousands more trapped by the blazes.

A vehicle is engulfed in yellowish smoke as it travels along a highway during bushfires near Cooma, New South Wales, Australia January 1, 2020 in this picture obtained from social media. Picture taken January 1, 2020. Mandatory credit JODIE BRADBY CANBERRA AUSTRALIA/via REUTERS

Long queues formed outside supermarkets and petrol stations near high-danger areas as both residents and tourists sought supplies to either bunker down or escape, but many shops and fuel stations had already run out of supplies.

Major roads were closed due to fire risks, leaving motorists only a handful of escape routes causing lengthy traffic jams.

More than 50,000 people were without power and some towns had no access to drinking water, after catastrophic fires ripped through the region on Dec. 31 sending the sky blood red and destroying towns.

Authorities have urged a mass exodus from several towns on Australia’s southeast coast, an area that is hugely popular in the current summer peak holiday season, warning that extreme heat forecast for the weekend will further stoke raging fires.

“It is vital, critical,” NSW Transport Minister Andrew Constance said on Australian Broadcasting Corp television. “We need everybody to leave. We are going to face a worse day on Saturday than what we have been through.”Huge bushfires have been burning for weeks across Australia, with new blazes sparked into life almost daily by extremely hot and windy conditions in bushland left tinder dry after a three-year drought.

Fuelled by searing temperatures and high winds, more than 200 fires are now burning across the southeastern states of New South Wales and Victoria, threatening several towns.

Seven people have been killed in New South Wales state alone since Monday, including a volunteer firefighter, officials said, with one person still missing.

The death toll for this year’s fire season is 15 in New South Wales alone.

One person has died in Victoria state this week.

Five military helicopters and two naval ships were en-route to the south coast to back up firefighters, bring in supplies like water and diesel and to evacuate people, the Australian Defence Force said.

One ship was headed for the coastal town of Mallacoota in Victoria, where around 4,000 people have been stranded on the beach front since New Year’s Eve when they watched much of the town burn down.

The navy rescue team will include 1.6 tonnes of water and paramedics, officials said.

The only road in and out of Mallacoota was expected to remain blocked for several weeks.

The state’s Country Fire Authority said smoke was hampering efforts to identify how many homes have been destroyed across the eastern region of the state.

“We can’t even get fire trucks into some of these communities,” CFA Chief Officer Steve Warrington said. “This is not over by a long way.”

Temperatures are forecast to soar above 40 degrees Celsius (104°Fahrenheit) along the south coast on Saturday, bringing the prospect of renewed firefronts to add to the around 200 current blazes.

Fires this season have already destroyed nearly 1,300 homes in the state, including 381 homes destroyed on the south coast just this week, the NSW Rural Fire Service said.

Bushfires are normal for Australia in the summer but this fire season has been one of the worst on record, putting pressure on Prime Minister Scott Morrison’s conservative climate change policies.