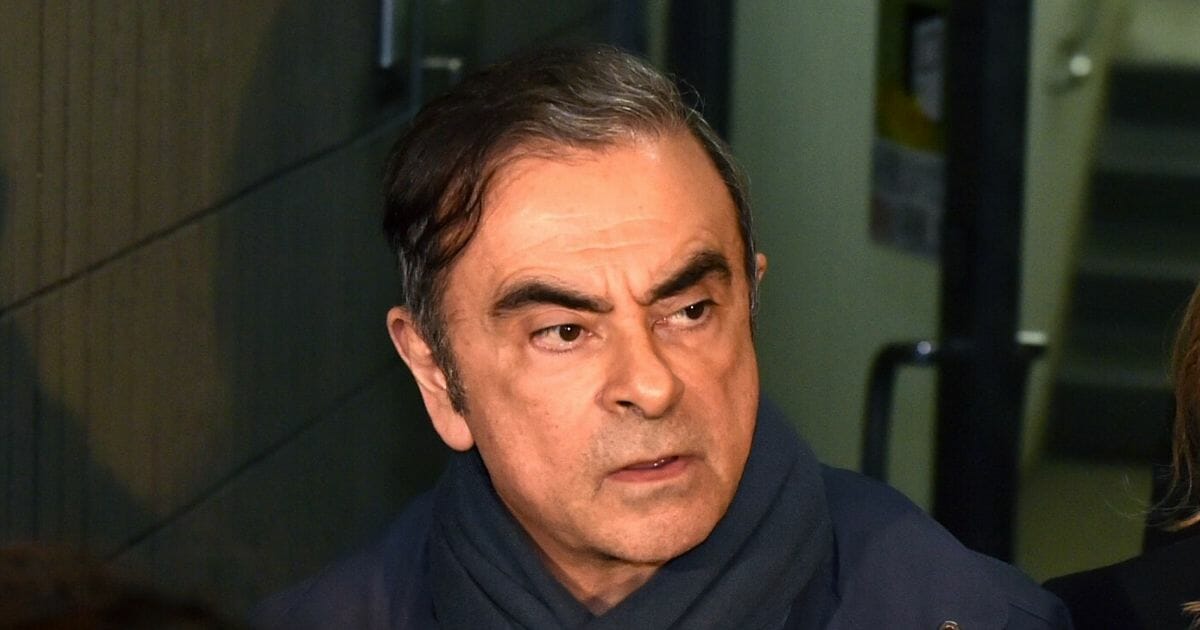 In a caper worthy of Hollywood, millionaire Carlos Ghosn has fled house arrest in Japan, with some reports saying he hid a musical instrument case.

Ghosn, 65, was arrested in November 2018 on charges that he had underreported his income as head of Nissan by $80 million. He was held under house arrest, without bail, pending a trial that was due to start in April, according to The Guardian. While under house arrest, he was also under 24-hour video surveillance.

Ghosn arrived in Lebanon Monday. He issued a statement saying he would “no longer be held hostage by a rigged Japanese justice system where guilt is presumed.”

“I have not fled justice, I have escaped injustice and political persecution,” Ghosn said, adding that he could “finally communicate freely with the media and look forward to starting next week.”

A report on his escape from Lebanon news channel MTV said that while under house arrest, Ghosn received a visit from what was supposed to be a Gregorian musical group, according to the Daily Mail.

The “musicians” were actually mercenaries in a paramilitary group, according to the report; they smuggled Ghosn out of his penthouse apartment. The report said that the 5-foot-6-inch Ghosn was able to escape detection by hiding in a musical instrument case, thought to be a double bass case.

Ghosn then flew on a private jet from Japan to Turkey, and then to Lebanon.

The report said that the plan was hatched by Ghosn’s wife, Carole, with whom Ghosn was largely prevented from communicating as a part of his bail. They are now living in her family home in Beirut, according to the New York Post. Ghosn, who spent time in Lebanon as a child, is popular in the Middle Eastern nation.

In its reporting on the escape, The New York Times, quoted what it said was “one person familiar with the matter,” said a lawyer for Ghosn served as a link between the plotters and the Lebanese government. The Times also quoted what it said was “an official in Beirut” as saying Ghosn entered Lebanon with a French passport, despite the fact that he had surrendered all his passports to Japanese officials.

“He left his things here,” Junichiro Hironaka, Ghosn’s attorney, told reporters. “It would have been difficult for him to do this without the assistance of some large organization.”

I guarantee they wouldn’t say “We are all #CarlosGhosn” if he was just successful enough to take care of himself and his family. They’re going to let him get away with fraud because he’s rich. pic.twitter.com/KRbPPqXBjs

What a superb way to end the year and a reminder that freedom is as often taken by the state than protected by the state.
—
YAY #CarlosGhosn !

OMG! Can #CarlosGhosn do it and actually take a presidency or Prime Minister role in #Lebanon 🇱🇧, turn it around like #Nissan? I hope so! It’ll be the biggest thing ever happened to an Arabian Country! It’ll grant Ghosn his much needed diplomatic immunity!https://t.co/ntHk4KVv7S

Legislator Masahisa Sato wondered whether Ghosn “had the support of some country” in his departure.

“It’s a huge problem that his illegal escape from Japan was allowed so easily,” he said.

Yoichi Masuzoe, a former governor of Tokyo, pointed the finger at Lebanon.