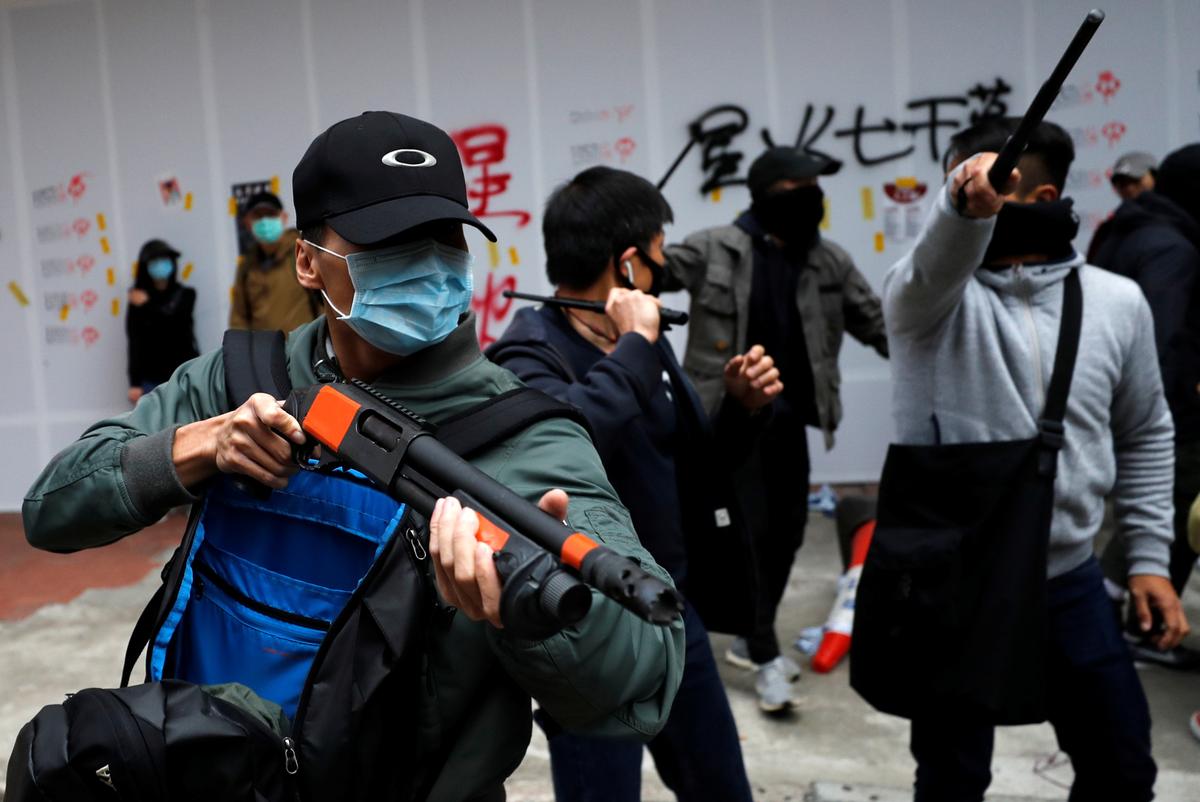 HONG KONG (Reuters) – A march drawing tens of thousands of anti-government protesters in Hong Kong on New Year’s Day spiralled into chaotic scenes as police fired several rounds of tear gas and water cannon at crowds including families before halting the event.

The violence broke out during the largely peaceful march as masses of citizens pressed authorities for further concessions in the Chinese-ruled city.

In the Wanchai bar district, some protesters had spray-painted graffiti and smashed cash machines in an HSBC bank branch when riot police moved in, pepper-spraying crowds in a tense face-off. Tear gas was then fired into the crowds, making some children cry.

The protesters, some with gas masks and clad in black, regrouped and formed their own lines as police blocked roads to prevent large crowds from completing the march as night fell.

The atmosphere grew tense in several districts on Hong Kong island, as hundreds of protesters dug in, forming road blocks, setting fires and throwing a few petrol bombs. Human chains formed down roads to help ferry supplies to people on the frontlines, including umbrellas and bricks.

Protesters have directed their ire at global banking group HSBC alleging a link between the arrest of four members of a group that raised funds to support the protesters and an earlier closure of an HSBC account linked to the group. HSBC deny any connection.

A bronze lion at the bank’s headquarters was daubed with red paint and scorched by a fire.

A bank spokesman said: “We strongly condemn the acts of vandalism and damage directed at our premises repeatedly in the last few days. We believe these are unjustified.”

Earlier in the day, under grey clouds, citizens young and old, many dressed in black and some masked, carried signs such as “Freedom is not free” before setting off.

A police officer holds a weapon during an anti-government demonstration on New Year’s Day to call for better governance and democratic reforms in Hong Kong, China, January 1, 2020. REUTERS/Tyrone Siu

“It’s hard to utter ‘Happy New Year’ because Hong Kong people are not happy,” said a man named Tung, who was walking with his two-year-old son, mother and niece.

“Unless the five demands are achieved, and police are held accountable for their brutality, then we can’t have a real happy new year,” he added.

He was referring to the push for concessions from the government including full democracy, an amnesty for the more than 6,500 people arrested so far, and a powerful, independent investigation into police actions.

Along the route, a number of newly elected pro-democracy district politicians mingled with the crowds on their first day in office, some helping collect donations to assist the movement. Youths also carried “Hong Kong Independence” flags and chanted that splitting the city from Chinese rule was the “only way out”.

“The government has already started the oppression before the New Year began … whoever is being oppressed, we will stand with them,” said Jimmy Sham, one of the leaders of the Civil Human Rights Front that organised the march. The organisers also condemned the police decision to cancel the rally.

Thousands of Hong Kong revellers had earlier welcomed in 2020 on neon-lit promenades along Victoria Harbour, chanting the movement’s signature slogan – “Liberate Hong Kong. Revolution of our Time” – for the final seconds before clocks struck midnight.

China’s President Xi Jinping said in a New Year’s speech that Beijing will “resolutely safeguard the prosperity and stability” of Hong Kong under the so-called “one country, two systems” framework.

Many people in Hong Kong are angered by Beijing’s tight grip on the city which was promised a high degree of autonomy under this framework when the former British colony returned to Chinese rule in 1997.

Beijing denies interference and blames the West for fomenting the unrest.

A group of 40 parliamentarians and dignitaries from 18 countries had written an open letter to Hong Kong’s leader Carrie Lam on New Year’s Eve, urging her to “seek genuine ways forward out of this crisis by addressing the grievances of Hong Kong people.”

The protest movement is supported by 59% of the city’s residents polled in a survey conducted for Reuters by the Hong Kong Public Opinion Research Institute.