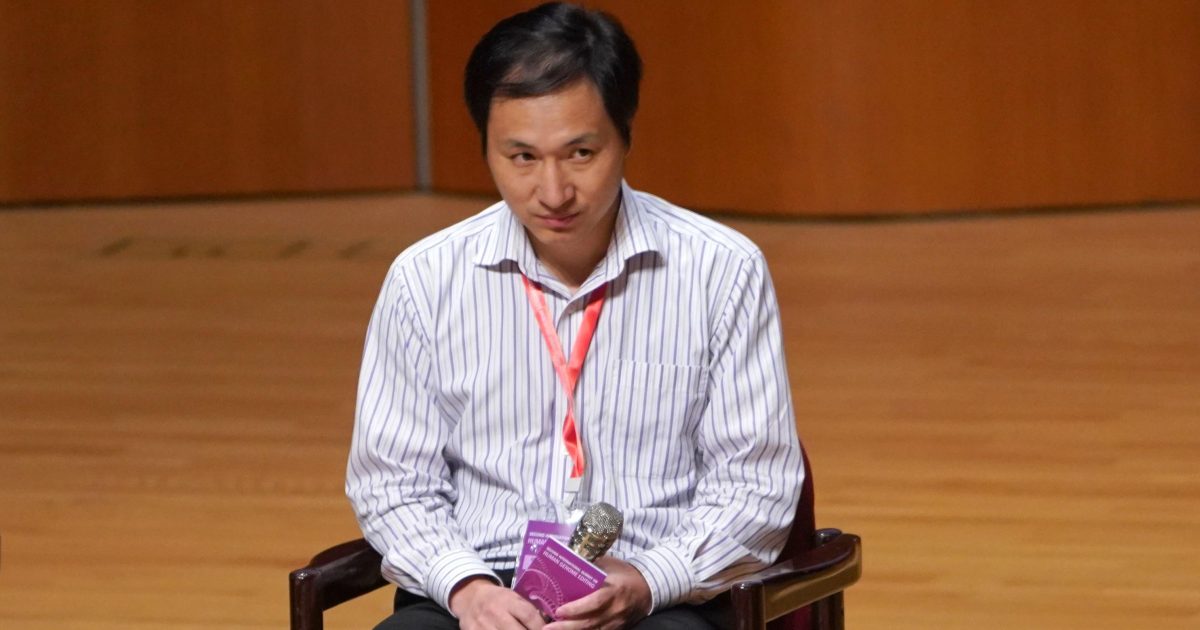 Three Chinese scientists have been convicted of “illegal medical practice,” reports the Xinhua news service. The heaviest sentence fell on He Jiankui, who now faces three years in prison and a fine of more than $400,000.

Back in November 2018, He announced that he had gene-edited several human embryos using CRISPR, with the aim of conferring resistance to HIV infection by disabling the CCR5 gene. According to Xinhua, three babies gene-edited by He have been born.

A specific mutation in the CCR5 gene found chiefly among folks of European descent, when homozygous, confers substantial resistance to HIV because it prevents the virus from entering immune cells. About 1 percent of Europeans are homozygous, meaning they carry a pair of protective CCR5 genes. Between 10 and 15 percent are heterozygous, meaning they carry only one of the protective CCR5 genes and are therefore not immune to HIV infection. The specific CCR5 gene mutation is very rare among other populations, including people of Han Chinese descent.

So what did He and his colleagues actually achieve? Earlier this month, MIT Technology Review obtained a copy of the unpublished article that He had reportedly submitted for peer review at various scientific journals. So far, all have turned it down. MIT Technology Review asked four experts—a legal scholar, an IVF doctor, an embryologist, and a gene-editing specialist—for their reactions to He’s paper.

First, the scientific problems. He and his colleagues claim that they successfully mutated the CCR5 gene in the implanted embryos but their mutation is not the same one found among Europeans who are immune to HIV. Before implanting gene-edited embryos, He’s team could have tested human cells to see if in fact their specific mutation resulted in resistance to HIV infection, but they did not.

In addition, He claims to have tested the embryos to make sure that all of their cells contain the mutation he was seeking to induce. But researchers who reviewed the paper point out that He’s tests could not rule out mosaicism—that is, a mixture of cells that contain the mutation and cells that do not. In fact, one of the children contains just such a mosaic of cells. If the children are genetic mosaics, then they are likely not resistant to HIV after all.

The good news is that a June report in Nature Medicine that suggested the CCR5 mutations might result in shorter lives for the gene-edited infants has been refuted and retracted.

Another issue: He claims that his team removed cells from the embryos to test for off-target mutations before implantation in the wombs of their mothers. CRISPR editing, especially the early cruder technique likely used by He, sometimes induces arbitrary mutations that could potentially result in other health problems. While the removed cells did not, according to He, exhibit any off-target mutations, those untested cells that actually grew to become the three infants could harbor them.

How big a problem are off-target mutations? Asked by Science shortly after He’s revelations last year, Harvard geneticist George Church observed, “Let’s be quantitative before we start being accusatory. It might be detectable but not clinical. There’s no evidence of off-target causing problems in animals or cells. We have pigs that have dozens of CRISPR mutations and a mouse strain that has 40 CRISPR sites going off constantly and there are off-target effects in these animals, but we have no evidence of negative consequences.”

Three ethical issues stand out with respect to He’s gene-editing efforts. First: Did the participants know enough to give their informed consent to the procedure? He recruited couples in which the male partner was HIV-positive. He may have told the prospective parents that his gene-editing technique was a way to insure that their children would not be born infected with HIV. But He’s unpublished article notes that his team used the well-known technique of sperm washing to remove HIV viruses before it was used to create embryos. In other words, the embryos were very unlikely to be infected even without gene-editing.

China bans assisted reproductive services for HIV-positive parents. To get around this ban, He may have supplied blood samples from uninfected men who pretended to be the intended fathers. MIT Technology Review speculates that the couples agreed to participate in He’s work not only to get around the ban, but also because it gave them access to fertility treatments that they could otherwise not have afforded.

He’s article claims that his proposed embryo gene-editing had been approved by an ethics panel at the Shenzhen Harmonicare Women’s and Children’s Hospital. But the hospital has denied giving such an approval.

Finally, He filed patent applications on his work. This presents a number of possible conflicts of interest, not least of which is that the patients who were recruited may not have known that He stood to benefit financially from his research. Dubiously, the author disclosure statement in He’s accompanying ethics paper claimed that “no competing financial interests exist.”

A year ago, in response to He’s activities, the World Health Organization (WHO) set up a global multi-disciplinary expert panel to examine the scientific, ethical, social, and legal challenges associated with human genome editing; the goal was to establish a system of “strong international governance” of such research and its clinical application. In March 2018, the WHO panel issued an initial report asserting that “it would be irresponsible at this time for anyone to proceed with clinical applications of human germline genome editing.” (Germline editing means introducing heritable changes to sperm, eggs, or embryos that can be passed along to future generations. The mutations engineered by He are likely heritable.)

More widespread furor over human genome-editing erupted when the Russian geneticist Denis Rebrikov announced in June that he was developing a plan to edit human embryos’ CCR5 genes to prevent HIV-infected mothers who do not respond to anti-retroviral treatments from passing the virus to their infants. When Rebrikov didn’t find any HIV-infected women who wanted to get pregnant and who also didn’t respond to antiretrovirals, he switched his goal to editing the embryos of deaf parents who are both homozygous for a specific mutation in the GJB2 gene. Opponents to Rebrikov’s plan counter that embryo editing is unnecessary since children with the GJB2 mutation do really well with cochlear implants.

Rebrikov responds, in Science, that deaf parents, properly informed of the risks, should make the decision. “How do they estimate the quality of life of their babies?” he asks. “Yes, hearing is not a life-or-death issue, but parents can say, ‘Well, we think that we very strongly want our child to have hearing.'”

At the August launch of a new global registry to track research on human genome editing, WHO director-general Dr. Tedros Adhanom Ghebreyesus noted, “Some scientists have announced their wish to edit the genome of embryos and bring them to term. This illustrates how important our work is, and how urgent. New genome editing technologies hold great promise and hope for those who suffer from diseases we once thought untreatable. But some uses of these technologies also pose unique and unprecedented challenges—ethical, social, regulatory and technical.”

Does genome-editing of gametes and human embryos really “pose unique and unprecedented challenges”? Not especially so. Basically, researchers and regulators need to aim at ensuring the safety and efficacy of genome-editing. (One such safety benchmark might be the slightly higher risk of birth defects associated with using other assisted reproduction technologies.) Potential parents fully informed of the risks and benefits of genome-editing should be allowed to avail themselves of the technology.

One often-heard objection is that future generations can’t give their consent to being genetically engineered. That observation is just ethically nonsensical. No one has ever given his or her consent to be born, much less to be born with a specific complement of genes. In any case, it’s hard to imagine that children will feel morally aggrieved that their parents prevented them from suffering a debilitating genetic disease. And surely we don’t want the government bureaucrats making eugenic decisions about what sort of children parents must bear.

The reproductive risks of edited genes are essentially no different than the risks associated with naturally mutated genes. Recent research finds that on average, each person has around 70 de novo germline mutations that were not present in their parents’ genetic code. Just like engineered genetic corrections, these natural mutations will likely be passed down to future generations. Obviously, genetically corrected embryos should be checked before they are implanted to make sure that the desired changes have been made and that no especially harmful off-target mutations have occurred. But after that, gene-edited kids can be released into the wild human gene pool with no special worries about how they might affect future generations. There is no need to set up some kind of international genome-editing governance regime as envisioned by the World Health Organization.

He’s moral shortcomings should not be used as an excuse to delay what Abertay University bioethicist Kevin Smith hails as the “human germline genetic modification revolution.” Given that some folks are still spooked by He’s activities, Smith prudentially suggests that “we kickstart the next biomedical revolution by proceeding not immediately but within around 1–2 years to intervene in the human germline.”