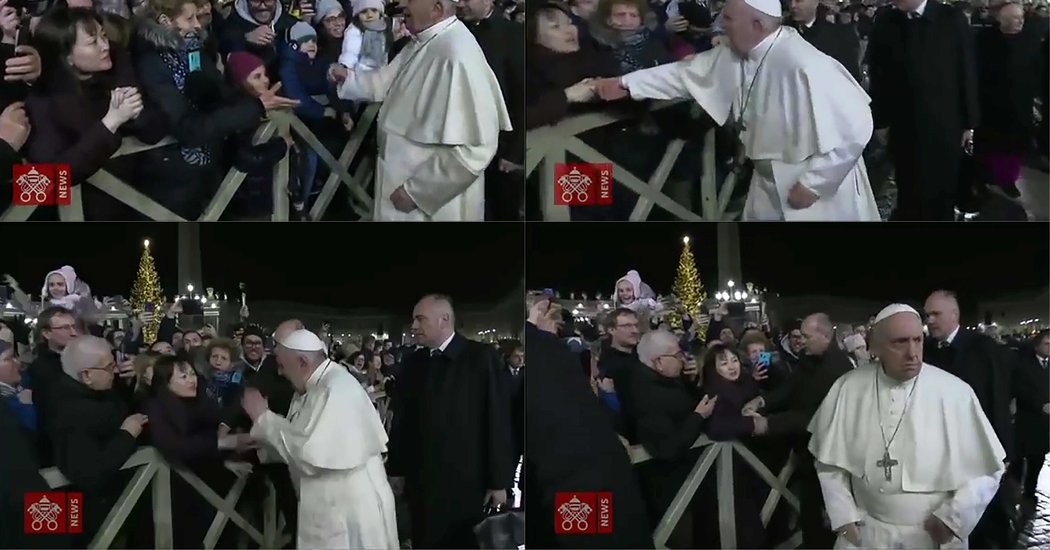 ROME — Pope Francis apologized on Wednesday for the flash of anger — or self-protection — that he exhibited while greeting the faithful around the Vatican’s giant Nativity scene after a New Year’s Eve liturgy the evening before.

In an incident captured on video and spread across the internet, Francis can be seen reaching into the crowd and seeking the hands of children. As he turns away, a woman in the crowd grabs his right hand with both of her hands and yanks the 83-year-old pope back, causing him to momentarily lose his balance. Francis, visibly upset, slaps twice at the woman’s hands to free himself, rebuking her, and then angrily turns away.

In his traditional Wednesday remarks, the pontiff offered an apology as he ruminated on patience and how it conquers “iniquity and power.”

“Many times we lose our patience,” he said. “I do, too, and I’m sorry for yesterday’s bad example.”

This is not the first time the world has focused on papal handshakes gone awry. In March, Francis repeatedly withdrew his hand from worshipers as they sought to kiss his ring.

Video of that receiving line also circulated widely, and it became material for jokes on late-night talk shows. It was also a source of consternation for conservatives, many of whom dislike Francis and called the video disturbing evidence of the pope’s breaking with tradition and ritual.

The Vatican said at the time that the pope’s motivation for yanking his hand back was itself viral. “It was a simple question of hygiene,” said Alessandro Gisotti, who was then the Vatican’s chief spokesman.

On the papal plane later that month, a reporter jokingly withdrew his hand as Francis sought to shake it, prompting a good-humored explanation from Francis that he had simply been looking out for people’s health.