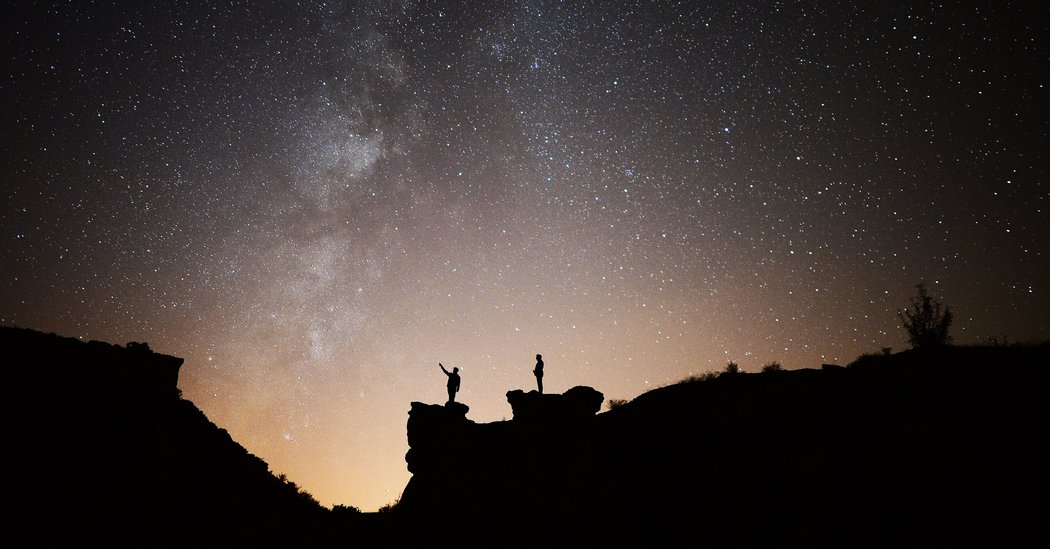 All year long as Earth revolves around the sun, it passes through streams of cosmic debris. The resulting meteor showers can light up night skies from dusk to dawn, and if you’re lucky you might be able to catch one.

If you spot a meteor shower, what you’re really seeing is the leftovers of icy comets crashing into Earth’s atmosphere. Comets are sort of like dirty snowballs: As they travel through the solar system, they leave behind a dusty trail of rocks and ice that lingers in space long after they leave. When Earth passes through these cascades of comet waste, the bits of debris — which can be as small as grains of sand — pierce the sky at such speeds that they burst, creating a celestial fireworks display.

[Sign up to get reminders for space and astronomy events on your calendar.]

A general rule of thumb with meteor showers: You are never watching the Earth cross into remnants from a comet’s most recent orbit. Instead, the burning bits come from the previous passes. For example, during the Perseid meteor shower you are seeing meteors ejected from when its parent comet, Comet Swift-Tuttle, visited in 1862 or earlier, not from its most recent pass in 1992.

That’s because it takes time for debris from a comet’s orbit to drift into a position where it intersects with Earth’s orbit, according to Bill Cooke, an astronomer with NASA’s Meteoroid Environment Office.

The best way to see a meteor shower is to get to a location that has a clear view of the entire night sky. Ideally, that would be somewhere with dark skies, away from city lights and traffic. To maximize your chances of catching the show, look for a spot that offers a wide, unobstructed view.

Bits and pieces of meteor showers are visible for a certain period of time, but they really peak visibly from dusk to dawn on a given few days. Those days are when Earth’s orbit crosses through the thickest part of the cosmic stream. Meteor showers can vary in their peak times, with some reaching their maximums for only a few hours and others for several nights. The showers tend to be most visible after midnight and before dawn.

It is best to use your naked eye to spot a meteor shower. Binoculars or telescopes tend to limit your field of view. You might need to spend about half an hour in the dark to let your eyes get used to the reduced light. Stargazers should be warned that moonlight and the weather can obscure the shows. But if that happens, there are usually meteor livestreams like the ones hosted by NASA and by Slooh.

While the International Meteor Organization lists a variety of meteor showers that could be seen, below you’ll find the showers that are most likely to be visible in the sky this year.

The Quadrantids give off their own New Years fireworks show. Compared with most other meteor showers, they are unusual because they are thought to have originated from an asteroid. They tend to be fainter with fewer streaks in the sky than others on this list.

There are records from ancient Chinese astronomers spotting these bursts of light more than 2,700 years ago. They blaze through the sky at about 107,000 miles per hour and explode about 55 miles up in the planet’s atmosphere. This shower comes from Comet Thatcher, which journeys around the sun about every 415 years. Its last trip was in 1861 and its next rendezvous near the sun will be in 2276.

The Eta Aquariids are one of two meteor showers from Halley’s comet. Its sister shower, the Orionids, will peak in October. Specks from the Eta Aquariids streak through the sky at about 148,000 miles per hour, making it one of the fastest meteor showers. Its display is better seen from the Southern Hemisphere where people normally enjoy between 20 and 30 meteors per hour during its peak. The Northern Hemisphere tends to see about half as many.

They come from Comet 96P Machholz, which passes by the sun every five years. Its meteors, which number between 10 and 20 per hour, are most visible predawn, between 2 a.m. and 3 a.m. It tends to be more visible from the Southern Hemisphere.

The Perseids light up the night sky when Earth runs into pieces of cosmic debris left behind by Comet Swift-Tuttle. The dirty snowball is 17 miles wide and takes about 133 years to orbit the sun. Its last go-round was in 1992.

Usually between 160 and 200 meteors dazzle in Earth’s atmosphere every hour during the display’s peak. They zoom through the atmosphere at around 133,000 miles per hour and burst about 60 miles overhead.

The Orionids are an encore to the Eta Aquariid meteor shower, which peaks in May. Both come from cosmic material spewed from Halley’s comet. Since the celestial celebrity orbits past Earth once every 76 years, the showers this weekend are your chance to view the comet’s leftovers until the real deal next passes by in 2061.

The Leonids are one of the most dazzling meteor showers and every few decades it produces a meteor storm where more than 1,000 meteors can be seen an hour. Cross your fingers for some good luck — the last time the Leonids were that strong was in 2002. Its parent comet is called Comet-Temple/Tuttle and it orbits the sun every 33 years.

The Geminids, along with the Quadrantids that peaked in January, are thought to originate not from comets, but from asteroid-like space rocks. The Geminids are thought to have been produced by an object called 3200 Phaethon. If you manage to see them, this meteor shower can brighten the night sky with between 120 and 160 meteors per hour.

The Ursids tend to illuminate the night sky around the winter solstice in the Northern Hemisphere. They only shoot around 10 to 20 meteors per hour. They appear to radiate from Ursa Minor, and come from Comet 8P/Tuttle.