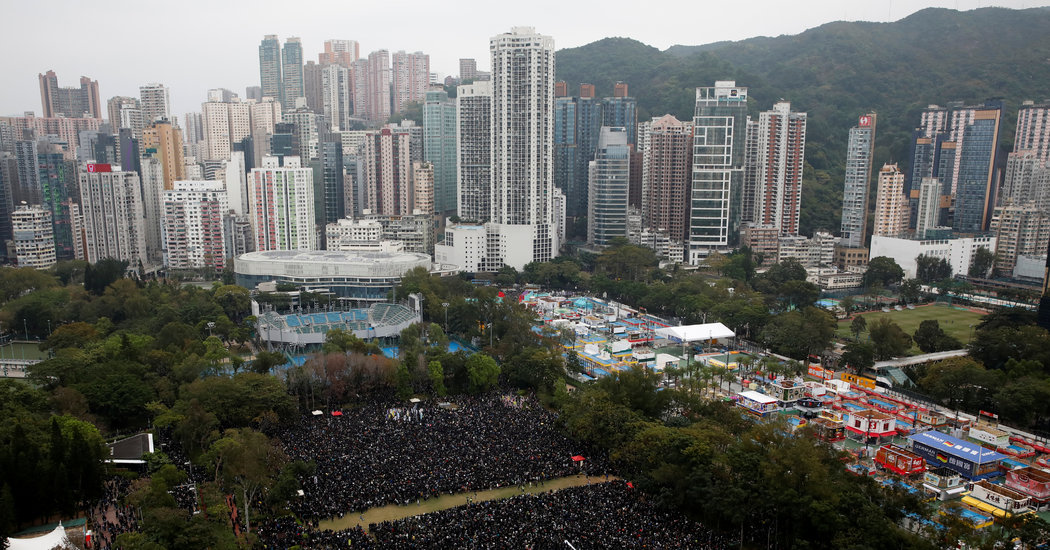 Tens of thousands of Hong Kong residents took to the streets on Wednesday for the city’s largest antigovernment protest in weeks, hoping to inject new momentum into a monthslong movement that has seen violent clashes and many arrests.

Wednesday’s protest is only the second large-scale demonstration to be authorized by the police since voters in November overwhelmingly elected pro-democracy politicians to neighborhood offices. That vote, a stinging rebuke to Communist Party officials in China, ushered in the longest period of relative calm since the city was first convulsed by protests in June.

More than 6,000 people have been arrested since the demonstrations began over legislation, since scrapped, that would have allowed extraditions to mainland China. The protests have since expanded to include a broad range of demands for police accountability and greater democracy.

A New Year’s Day march is organized annually by Hong Kong’s pro-democracy camp. In light of the crisis currently facing the city, and a population that is the most politically engaged in a generation, many expect this year’s event to be bigger than usual.

The march began just before 3 p.m. along a two-mile route approved by the police. The protest route passed some of the city’s most iconic landmarks and buildings, stretching from Victoria Park to the Central business district.

“We must walk shoulder to shoulder and not forget our original intentions,” Jimmy Sham, leader of the Civil Human Rights Front, which organized the march, said at a rally. “We won’t forget all of those who have been suppressed, and we won’t give up on them.

The protesters, many of them wearing masks and clad in black, poured into the park and surrounding streets. Some said they were unsure how the movement would continue in the face of a government that was unwilling to compromise.

“Nobody knows what this movement will eventually achieve, but most people are just doing what they can. If nobody comes out, then it would be the end of Hong Kong and all the beautiful things we are familiar with,” said Grace Ng, 30, who works in public relations.

The themes of Wednesday’s march include opposing salary increases for police officers — many believe the police have responded brutally to the protests — and ending a perceived government crackdown on activists, especially educators.

“We appeal to the organizer and participants to remain calm and rational,” Kwok Ka-chuen, a police spokesman, said ahead of the march. “Let us kick-start 2020 with peace and get Hong Kong back on the right track.”

The police are expected to deploy 6,000 officers to patrol the march, The South China Morning Post reported.

Protesters clashed with the police in Mong Kok, one of the city’s busiest neighborhoods, just as the clock was to strike midnight on New Year’s Eve. The police used water cannons and tear gas against a small group of demonstrators.

Carrie Lam calls for a resolution to the crisis.

On New Year’s Eve, Carrie Lam, the city’s embattled chief executive, addressed the territory and called for calm ahead of the protest.

“Let’s start 2020 with a new resolution, to restore order and harmony in society. So we can begin again, together,” Mrs. Lam said in a three-minute video message that included other officials.

“We must handle the problems at hand and acknowledge the shortcomings in our systems as well as the deep-rooted problems and conflicts that have been accumulating for many years in our society,” she said.