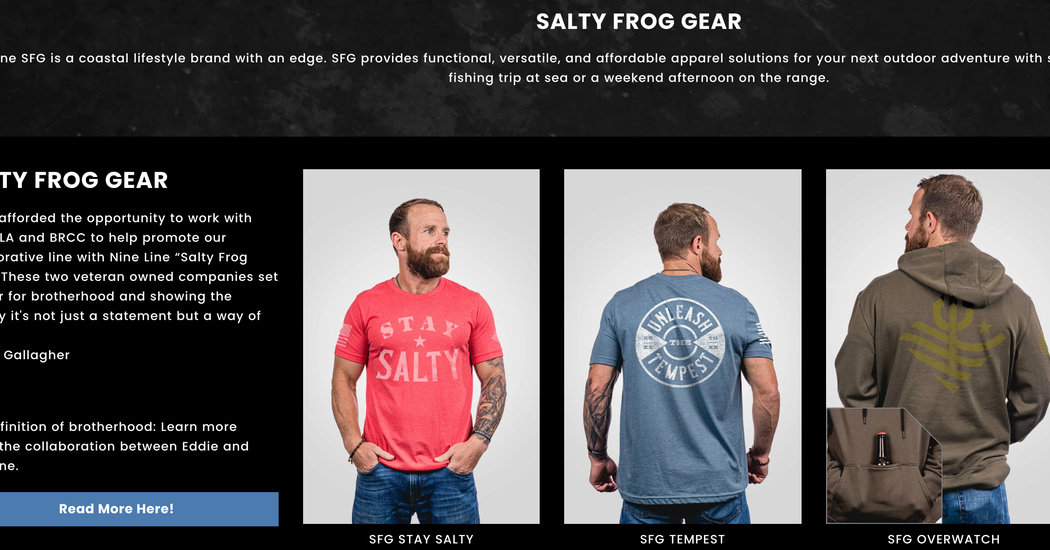 A year ago, Navy SEAL Chief Petty Officer Edward Gallagher was wearing drab prison scrubs at a brig near San Diego, facing murder charges that could have sent him to prison for the rest of his life. Now he is modeling his own lifestyle clothing brand, endorsing nutrition supplements and positioning himself as a conservative influencer with close ties to the man who helped clear him — President Trump.

Chief Gallagher was acquitted this summer of charges that he shot at civilians and killed a wounded captive with a knife while serving as a platoon leader in Iraq. The punishment for his lone conviction — posing for a grisly trophy photo with the dead captive’s body — was reversed this fall by President Trump, who has repeatedly praised him. At a political rally in Florida, he called him “one of the ultimate fighters.”

Now, Chief Gallagher is using his controversial past as a springboard to social media followers and branding opportunities. Beyond repping coffee beans and protein shakes, he is making appearances at influential conservative gatherings and rubbing elbows with Mr. Trump’s inner circle at Mar-a-Lago.

Paul Rieckhoff, the founder of Iraq and Afghanistan Veterans of America, who has openly criticized Chief Gallagher, said that the square-jawed, blue-eyed SEAL has been a valuable political weapon for the Trump administration.

Watch “The Weekly,” The Times’s new TV show, on Hulu and FX.

“Trump is a master of casting, and Gallagher is a perfect fit,” said Mr. Rieckhoff, who now hosts the Angry Americans podcast. “He’s handsome, he’s heroic, he’s got a beautiful wife. He’s a Rambo version of the same story Trump has been telling over and over: The deep state is trying to screw you, the media is bad, and the rich people don’t understand you. But I’ll stick up for you.”

The partnership is valuable for Chief Gallagher, too, Mr. Rieckhoff said, because in raising his profile in conservative circles, he can cash in on book deals, speaking engagements and other business opportunities.

Chief Gallagher has appeared regularly on Fox News and other outlets, but declined through his lawyer to speak with The New York Times about his current projects. In an email, his lawyer, Timothy Parlatore, said: “Chief Gallagher is happy to respond to inquiries by legitimate journalists looking to publish factual pieces, but has no time for propagandists who put out knowingly false statements masquerading as fact.”

On Instagram, the chief and his wife have been outspoken, touting both the president and the various consumer products they are backing. (Their Instagram account has twice blocked a New York Times correspondent who has covered his case over the past year.)

“Brotherhood isn’t just a statement, it’s a way of life,” Chief Gallagher said in a statement explaining his apparel line, called Salty Frog Gear. Described as a “coastal lifestyle brand with an edge,” it features T-shirts that read “stay salty,” and hooded sweatshirts, with a custom front pocket designed to hold a beer bottle.

Following the lead of many micro influencers, Chief Gallagher’s Instagram account has also endorsed veteran-owned coffee beans and muscle-building supplements with macabre names like Double Tap and Total War. Like a sponsored athlete of the world’s most dangerous sport, he regularly shows off the logos and clothing of a number of right-wing veterans’ groups that push a distinct brand of patriotism, including an apparel brand run by the SEAL veteran who made the knife Chief Gallagher was accused of using to kill a captive. Along with all sorts of items emblazoned with the logo “KILL BAD DUDES,” the site sells a “Waterboarding Instructor” shirt.

Chief Gallagher and his wife have also set up an online shop selling T-shirts that mock the Navy and the SEALs who testified against him in court, calling them “mean girls.”

Chief Gallagher’s lawyer said the SEAL was writing a book about his career, but declined to provide details about whether he had signed a publishing deal or with whom.

To be sure, Chief Gallagher is hardly the first Navy SEAL to market his past. So many SEALs have published war stories and booked public speaking gigs in recent years that the satirical news site, The Onion, published an article announcing “Navy Forms Elite New SEAL Team to Write Best-Selling Tell-All Books.”

But Chief Gallagher is the first to do it in the wake of a war crime court-martial, and the only one who has sought to tie his public persona so closely to a political party and a divisive commander in chief.

Chief Gallagher, 40, sometimes went by the nickname Blade during his 20 years in the Navy. He served eight combat deployments and was awarded repeated medals for valor under fire.

But he also ran into trouble over the years. He was investigated for shooting a small girl while targeting a suspected Taliban member in Afghanistan in 2010, and was arrested and accused of assaulting a Navy police officer in 2014. In both cases, no criminal charges were filed.

Despite his past, Chief Gallagher was respected in the SEAL teams as an aggressive operator. But when he was assigned to lead his first platoon in combat in 2017 in Mosul, Iraq, SEALs who served under him said he became fixated on getting in firefights, made bizarre and dangerous tactical decisions, seemed to not know how to do his job and killed people with little regard to the rules of engagement.

In video interviews with investigators, multiple SEALs broke down in tears, describing their leader as “evil” and “toxic.”

Sometimes he would go on solo “gun runs,” they said, emptying loads of heavy machine gun fire into neighborhoods with no apparent targets.

“I think he just wants to kill anybody he can,” Corey Scott, a medic from the platoon, told Navy investigators.

Several members of the platoon eventually turned him in for murder.

Chief Gallagher has always denied charges of misconduct, saying he was accused by poor performers who could not meet his high standards. In a video posted on Instagram, he said the government “threw me in prison for doing my job.”

“As someone who served with Eddie and other members of SEAL team 7 downrange, I know the truth about the character of a man unjustly targeted by a broken investigation and corrupt prosecution,” the company’s founder, Tyler Merritt, said in a statement. “Nike has their First Amendment right to make individuals such as Colin Kaepernick their brand ambassadors. We have the right to make patriots like Chief Gallagher one of ours.”

Nine Line’s promotional photos and videos for the new clothing line show Chief Gallagher shooting an AR-15 assault rifle. In closed online forums, several of the SEALs from his old platoon who he had accused of not being able to meet his high standards noted derisively that the holographic sight on his rifle had been put on backward.

Mr. Trump has signaled he has few misgivings in associating with Chief Gallagher. He said he would like to have Chief Gallagher and other service members accused or convicted of war crimes campaign for him, and perhaps even appear at the Republican convention in 2020, according to The Daily Beast.

Earlier this month Chief Gallagher attended the conservative youth organization Turning Point USA’s Student Action Summit with his wife, Andrea, where he met with Donald Trump Jr. A short time later, he was at Mar-a-Lago with Mr. Trump.

A few days after that, Chief Gallagher posted a photo of himself giving the thumbs up, wearing a KILL BAD DUDES muscle shirt, while holding a mug that reads, “I love when I wake up in the morning and Donald Trump is president.”