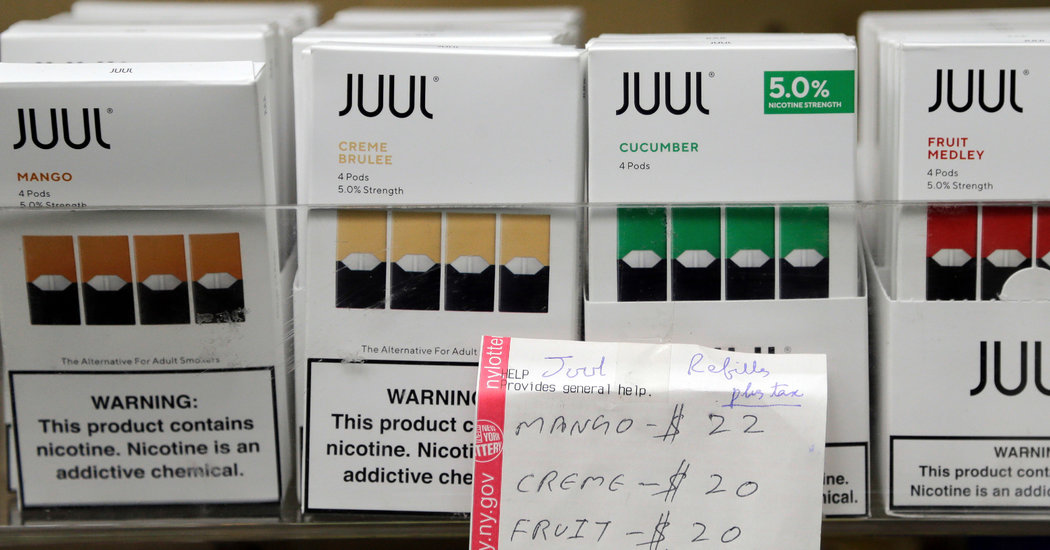 The Trump administration is expected to announce later this week that it will ban mint-, fruit- and dessert-flavored e-cigarette cartridges popular with teenagers, but allow menthol and tobacco flavors to remain on the market.

Flavored liquid nicotine used in open tank systems can continue to be sold, administration officials said, an important concession to vape shops that have thrived alongside the booming e-cigarette business in recent years.

The administration’s decision is a partial retreat from a commitment it made in September to quickly devise a ban of all flavors except those that tasted like tobacco. Its decision to exempt menthol appeared to be an effort to dodge a bruising legal battle with the tobacco industry, and also reflected intense lobbying by the vaping industry.

Public health experts were pleased that the flavors most alluring to youths were prohibited, but feared teenagers would switch to menthol rather than quit vaping.

President Trump’s hesitance to put in place a full ban has become increasingly clear in recent months. In a televised White House meeting in November, he said he was concerned that a full ban would drive people seeking flavors to unsafe, illicit products. And his advisers, including Brad Parscale, his re-election campaign manager, have warned him that a flavor ban would hurt him with his base and could depress turnout in battleground states.

Tobacco and vaping companies have lobbied lawmakers and the White House against banning flavors, including menthol. They have argued that adult smokers need e-cigarette options to help them switch from cigarettes — and that because 35 percent of cigarettes sold are menthol brands, taking menthol flavors off the market would pose a hardship for those smokers trying to quit.

The companies also say that a full flavor ban would put thousands of vape shops out of business.

Industry lobbyists seeking to protect flavors were joined by conservative organizations like Americans for Tax Reform, which opposed regulatory limits that they said would harm the small businesses that manufacture vaping flavors, retailers that sell them and adult consumers of e-cigarettes.

Juul, which dominates the e-cigarette business, has largely stayed out of the fray amid public backlash over its role in the soaring rise of teenage vaping. Facing vociferous and legal opposition from parents, schools and public health experts, the company voluntarily took its fruit- and dessert-flavored products off the market, and has lost business to competitors selling flavors popular with teenagers, like mixed berry, watermelon and mango.

Competitors have also been selling “Juul-alikes,” nicotine pods that fit Juul’s devices in flavors like Strawberry Milk and Peach Madness.

Earlier efforts to restrict sales of flavored e-cigarettes stalled even as the popularity of vaping nicotine grew among millions of young people. The Food and Drug Administration first sought to ban sales of flavors during the Obama administration, but was rebuffed by the White House after fierce lobbying by tobacco companies and retail shops.

The current debate over a flavor ban was set off by twin public health crises — soaring rates of youth vaping that experts feared was addicting a new generation to nicotine and the recent spate of severe lung injuries largely related to vaping THC, the high-inducing ingredient in marijuana. More than 2,500 people have been hospitalized since mid-August and more than 54 people have died.

The new restrictions on flavors will not extend to THC-vaping products, which are mainly regulated by states that have legalized marijuana.

Alex M. Azar II, the secretary of health and human services, had announced in September after meeting Mr. Trump and his wife, Melania, that the F.D.A. would draft a ban on almost all e-cigarette flavors, including mint and menthol. At the time, Mr. Azar said those two flavors appeared to be popular with teenagers, especially since Juul had pulled its fruit and dessert flavors from shelves.

A more recent survey found mint was far more popular than menthol with teenagers, but public health experts say that teenagers will switch to menthol — which creates a cooling sensation — if all other flavors, including mint and mango, are taken off the market.

“Flavors attract kids, and menthol is a flavor,” said Erika Sward, a spokeswoman for the American Lung Association. “It really helps to numb the senses and makes the poison go down easier.”

Juul, the nation’s largest seller of e-cigarettes, has been the target of public and regulatory scrutiny over whether it marketed its products to lure teenagers and young adults to use them. Several investigations are underway into its sales and promotion practices.

Some states have already imposed flavor bans, though some of those efforts have been forestalled because of legal challenges waged by the vaping industry and its tobacco company partners.

In anticipation of a national ban, Juul had taken most of its flavors off the market. Until recently, mint-flavored products made up about 70 percent of its sales; menthol was 10 percent; and tobacco flavors accounted for 20 percent. Juul and Altria, the tobacco giant that bought a 35 percent stake in Juul last year, said they did not oppose the federal regulation of flavors.

Reynolds American, which manufactures the Vuse e-cigarette, sought to exempt menthol and mint flavors from a ban, and the Vapor Technology Association, a trade group, has pressed to keep most flavors on the market.

The Food and Drug Administration’s drive to end teenage vaping began more than a year ago, when a federal youth tobacco survey showed that in 2018 more than 3.6 million youths reported using e-cigarettes in the previous 30 days.

The youth tobacco survey in 2019 showed that teenage vaping continued to rise, with more than five million minors reporting recent use of e-cigarettes this year. About one-quarter of high school students reported vaping within 30 days of the survey, up from 20 percent last year.

The National Youth Tobacco Survey, conducted by the F.D.A. and the Centers for Disease Control and Prevention and published last month, noted that nicotine exposure during adolescence could harm the developing brain, which continues to form until about age 25. The study also found that more than 10 percent of middle school students reported current use of e-cigarettes.

For the first time, the 2019 survey asked students what brand of e-cigarettes they generally used. Juul was the overwhelming favorite. Fifty-nine percent of high school e-cigarette users said they usually vaped with a Juul, as did 54 percent of middle school users. The majority of e-cigarette users reported using flavored varieties, with fruit flavors being the most popular, followed by mint or menthol.

At a recent congressional hearing, Dr. Anne Schuchat, the C.D.C.’s principal deputy director, said the agency was extremely concerned about e-cigarette flavors hooking young people on nicotine. She also said that the C.D.C. did not believe that e-cigarette flavors played a critical role for adults trying to quit smoking cigarettes, and that to be effective, a flavor ban should include menthol and mint.