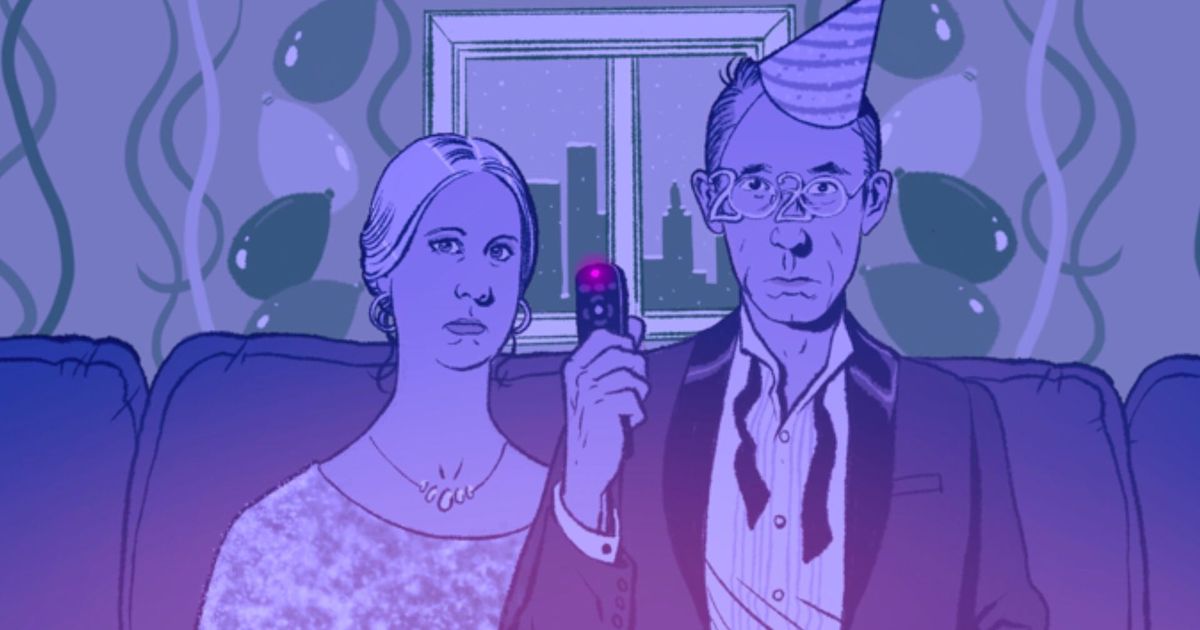 Greetings to you and your headache in this, the new decade!

For many, kicking off a fresh year means funneling a mix of champagne and peppermint schnapps down your gullet, then spending the first 48 hours of January regretting it. Luckily, with the streaming wars in full swing, you won’t be alone in your bed of shame, tequila, chestnuts, ham, green bean casserole, and Twizzlers.

Here are 20 streamable movies — ranked by comforting capabilities — to keep you and your New Year’s Day hangover company in 2020.

Directed by Olivia Wilde, Booksmart has been called the Superbad of female friendships — which really undersells just how spectacularly original it is. Starring Beanie Feldstein and Kaitlyn Deaver, with an exquisite performance by Billie Lourd, this coming-of-age, buddy comedy follows two high schoolers on their last night out before graduation. Perfect for that hair of the dog strategy.

How to watch: Mission: Impossible – Fallout (2018) is now streaming on Hulu.

“I am reeeeeady to paaaarty.” It’s the Kristen Wiig comedy you’ve seen too many times. Starring Wiig, Maya Rudolph, Rose Byrne, Ellie Kemper, Wendi McLendon-Covey, and Melissa McCarthy, Bridesmaids provides the perfect opportunity for you to fade in and out of familiar comedy beats. But if you’re feeling nauseous? Skip a few scenes.

How to watch: Bridesmaids (2011) is now streaming on HBO Now.

Based on Darcey Bell’s novel of the same name, A Simple Favor is the psychological thriller perfect for martini-sipping while knocking out some light mommy blogging — or y’know, dry-heaving into an empty trashcan and picking confetti out of your hair. Anna Kendrick, Blake Lively, and Henry Golding star in a love triangle at least twice as painful as your hangover, wrapped in a mystery better than any holiday party.

Directed by Nacho Vigalondo, Colossal is one of the more inventive sci-fi films about alcoholism on the market. Anne Hathaway leads as a down on her luck writer who discovers she has the ability to control a gigantic monster terrorizing Seoul, South Korea. We guarantee what she does in her drunken stupor is more embarrassing than any of the stunts you pulled last night.

How to watch: Colossal is now streaming on Hulu.

Time travel, but with a hot tub! In director Steve Pink’s cult classic, three friends and one of their neighbors, played by John Cusack, Rob Corddry, Craig Robinson, and Clark Duke, take off to a ski lodge for the weekend. When the group comes in contact with an illegal Russian energy drink and a hot tub, they’re transported back to the 1980s. Hilarity ensues.

How to watch: Hot Tub Time Machine (2010) is now streaming on Hulu.

We’ve said it once and we’ll say it again: Ragnarok slaps! One of the best rewatches in the Infinity Saga, the third installment in the Thor films brings back the characters of Chris Hemsworth, Tom Hiddleston, Idris Elba, Anthony Hopkins, and Mark Ruffalo, while introducing Tessa Thompson, Cate Blanchett, Karl Urban, and Jeff Goldblum to the MCU.

The sequel that presently surprised the globe, Jumanji: Welcome to the Jungle reimagines the classic Robin Williams film as a video game — setting the stage for some of the funniest character acting of the last decade. Dwayne Johnson, Karen Gillan, Kevin Hart, Jack Black, Nick Jonas, Bobby Canavale, and more star.

How to watch: Jumanji: Welcome to the Jungle (2017) is available for rent or purchase with Amazon Prime Video.

Dumplin‘ features delightful performances by Jennifer Aniston, Danielle Macdonald, Luke Benward, and more in a tale of an outsider finding her way in — all set to the brilliant works of Dolly Parton. Start the year by working through your mom issues…or rehydrating. YMMV.

Did you experience an uncomfortable array of emotions during last night’s New Year countdown? Never fear! Inside Out is here to breakdown the complexity of human existence into teeny, tiny, anthropomorphic pieces and spoon-feed them to you as you enter 2020. Featuring voice acting by Amy Poehler, Bill Hader, Mindy Kaling, Lewis Black, Phyllis Smith, and more.

The tale of Scott Pilgrim, Ramona Flowers, and the Seven Evil Exes is nothing short of legendary. With some of the best one-liners ever written and a clever visual style, Scott Pilgrim vs. The World should be a staple in every collection — even when your head feels like it’s full of concrete.

How to watch: Scott Pilgrim vs. The World (2010) is now streaming on Netflix.

John Mulaney made a children’s television special! On purpose! In John Mulaney & The Sack Lunch Bunch, Mulaney blends spectacular comedy with Mister Rogers-esque styling to delight and exasperate all ages. With special appearances by Jake Gyllenhaal, Natasha Lyonne, and more.

How to watch: John Mulaney & The Sack Lunch Bunch is now streaming on Netflix.

Everything is better with Minions — even hangovers! It’s great to see Kevin, Stuart, and Bob banana-ing there way across the globe in their standalone film Minions (2015), but nothing beats their original performance in Despicable Me. “Bee-do-beee-do-beeee-do!”

Few things are as calming as watching Cartoon Network’s Steven Universe, even its in feature-length form with one dark realization. Best enjoyed if you’re already familiar with the show, Steven Universe: The Movie is a poetic end to one of the best animated shows of the last 10 years.

How to watch: Steven Universe The Movie (2019) is available for rent or purchase with Amazon Prime Video.

When you’re too nauseous to even think about picking up Sword and Shield, there’s Pokémon Detective Pikachu to guide your way. Voiced by Ryan Reynolds, super sleuth Pikachu is a character unlike any other, adorable, cuddly, but with all that Deadpool charm. Justice Smith, Kathryn Newton, Chris Geere, and more star.

How to watch: Pokémon Detective Pikachu (2019) is available for rent or purchase with Amazon Prime Video.

Your head to your stomach: “You’re killing me, Smalls!” Begin the new year with a trip down memory lane by revisiting David Mickey Evans’ The Sandlot, the tale of a whole bunch of kids who love baseball and facing off with gigantic dogs.

The letters are out. In Netflix’s To All The Boys I’ve Loved Before, Lara Jean Covey (Lana Condor) must contend with the fallout of her secret crushes being inadvertently revealed to her school by her sister Kitty (Anna Cathcart). Things get especially hairy when the charming Peter Kavinsky (Noah Centineo) confronts Lara Jean. If you haven’t seen it…ya gotta!

How to watch: To All The Boys I’ve Loved Before (2018) is now streaming on Netflix.

It’s easy to pass over What If thinking its just another low-budget rom-com. But reader, it is not. Starring Danielle Radcliffe and Zoe Kazan with supporting performances by Adam Driver, Mackenzie Davis, and Megan Park, this blissfully brief tale is irresistibly charming. Make the most of your morning in hell by enjoying a film you’ve missed out on ’til now.

How to watch: What If (2014) is now streaming on Amazon Prime Video.

In this house, we stan Paddington. Touching, adorable, and unspeakably silly, Paddington 2 is one of the most underrated movies known to mankind — not to mention, excellent viewing in times of struggle. Rest gentle, sweet prince, for a talking bear is here to guide your overindulgent dreams.