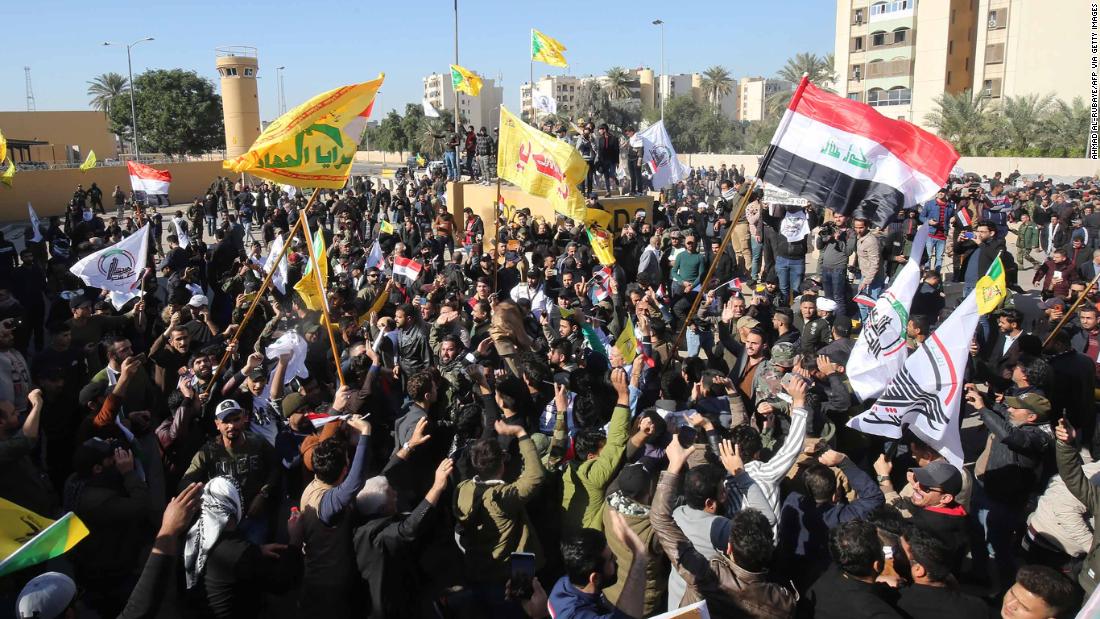 Esper said the US has “taken appropriate force protection actions to ensure the safety of American citizens, military personnel and diplomats” serving in Iraq.

“As in all countries, we rely on host nation forces to assist in the protection of our personnel in country, and we call on the Government of Iraq to fulfill its international responsibilities to do so,” Esper added in the statement.

A US defense official told CNN later Tuesday that the US Military is expected to soon deploy additional forces to the Middle East in response to the situation. The number of troops will initially be less than a thousand additional US soldiers drawn mostly from the 82nd Airborne Division in Fort Bragg, North Carolina, according to the official.

A larger force involving several thousand soldiers, a brigade-type element, has also been placed on stand-by and could also be deployed to the region if the need arises.

The US had sent two Apache helicopters to fly over the embassy in a show of force, a US official told CNN earlier Tuesday. The US also earlier deployed about 100 US Marines from a crisis response task force based in Kuwait to bolster security at the embassy. Those Marines flew into the embassy compound aboard MV-22 Osprey aircraft.

Another defense official said that it was unlikely that the additional soldiers coming from the 82nd Airborne will be sent to Iraq, but will instead be sent to a nearby country or countries in the region so they are positioned to respond quickly if the situation deteriorates. The additional soldiers could arrive in a matter of days at the earliest, according to the first official.

Secretary of State Mike Pompeo told Fox News Tuesday evening that there are currently no plans to evacuate the embassy or pull out US troops.

The expected deployment comes amid fallout over US airstrikes against five facilities the Pentagon says are tied to an Iranian-backed militia blamed for a series of attacks on joint US-Iraq military facilities housing American forces.

Two sources at the demonstration on Tuesday witnessed an attempt to break into the premises, adding that security personnel fired tear gas to repel the attack. Video footage shows demonstrators smashing windows, burning items outside and throwing rocks over the walls. The embassy, in Baghdad’s heavily fortified Green Zone, has been put under lockdown, but protesters have not been able to breach the compound, an embassy spokesperson told CNN.

The airstrikes occurred at about 11 a.m. ET Sunday, a source familiar with the matter told CNN. Killing at least 25 people and wounding 51, they stand as the first significant military response in retaliation for attacks by the Shia militia group, known as Kataib Hezbollah, that have injured numerous American military personnel, according to US officials.

Esper briefed Trump Saturday before carrying them out with the President’s approval, according to a US official familiar with the strikes.

Pentagon spokesman Jonathan Hoffman described the strikes against the group as “precision defensive strikes” that “will degrade” the group’s ability to conduct future attacks against coalition forces.

President Donald Trump confirmed Tuesday that the airstrikes were a response to a recent attack that killed a US contractor. He blamed Iran both for the contractor’s death and Tuesday’s attack on the embassy.

“Iran killed an American contractor, wounding many. We strongly responded, and always will. Now Iran is orchestrating an attack on the U.S. Embassy in Iraq. They will be held fully responsible. In addition, we expect Iraq to use its forces to protect the Embassy, and so notified!” Trump tweeted.