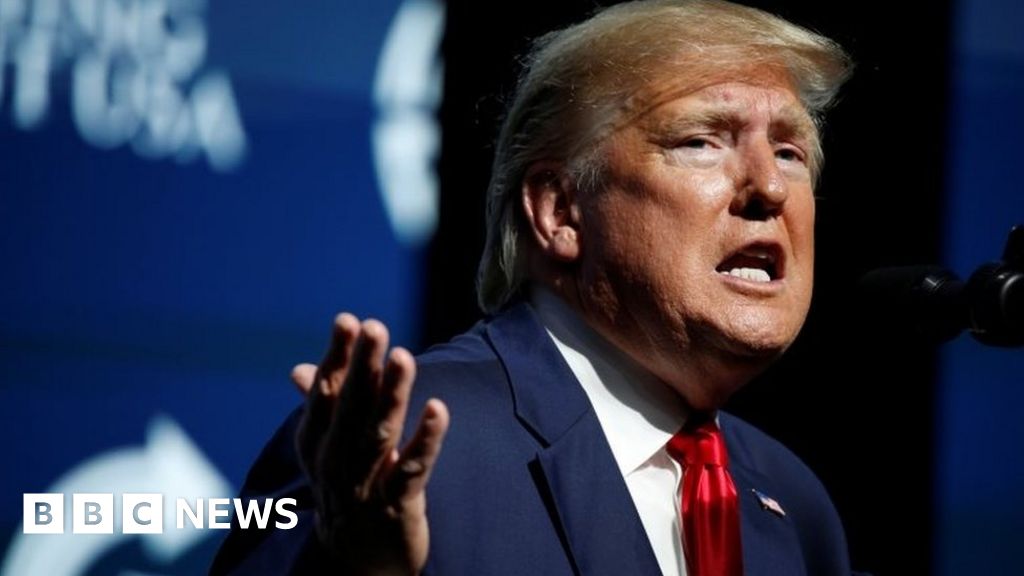 The White House sought to freeze aid to Ukraine just 91 minutes after President Trump spoke to President Volodymyr Zelensky by phone in July, a newly-released government email has revealed.

The fateful phone call is key to the abuse of power charge on which Mr Trump has been impeached.

A US whistleblower who heard about the conversation raised concerns, which ultimately triggered the impeachment inquiry.

Mr Trump was formally impeached by the Democratic-controlled House of Representatives on Wednesday, but is unlikely to be removed from office as the case will go to trial in the US Senate, where his Republican party has a majority.

What’s in the email?

The newly-released email was obtained by the Center for Public Integrity following a court order in a freedom of information case.

A rough transcript of that call was declassified by the White House following a whistleblower complaint it was being covered-up.

The transcript shows Mr Trump asked Mr Zelensky to “do us a favour” and investigate Joe Biden, currently a frontrunner to be the Democratic candidate in the 2020 White House race, and his son Hunter Biden, who had previously worked for a Ukrainian energy company.

In the email Mr Duffey asks that the Department of Defense “hold off” on providing aid following the administration’s plan to review.

“Given the sensitive nature of the request, I appreciate your keeping that information closely held to those who need to know to execute direction,” the email reads.

Rachel Semmel, a spokeswoman for the Office of Management and Budget, dismissed the characterisation of the email in a statement to US media on Sunday.

“It’s reckless to tie the hold of funds to the phone call. As has been established and publicly reported, the hold was announced in an interagency meeting on July 18,” CNN quoted her as saying.

“To pull a line out of one email and fail to address the context is misleading and inaccurate.”

Meanwhile the top Democrat in the US Senate, Chuck Schumer, said the email proved the need for new witnesses and evidence at President Trump’s impeachment trial.

“If there was ever an argument that we need Mr Duffey to come and testify, this is that information. This email is explosive,” Mr Schumer said.

“A top administration official, one that we requested, is saying, stop the aid 90 minutes after Trump called Zelensky and said keep it hush, hush. What more do you need to request a witness?”

“Until we hear from the witnesses, until we get the documents, the American people will correctly assume that those blocking their testimony were aiding and abetting a cover up, plain and simple,” Mr Schumer added.

“So I’ll close by saying this: President Trump, release the emails, let the witnesses testify, what are you afraid of?”

What happens next with impeachment?

The start date of the trial is in doubt, as partisan wrangling between the parties continues.

Mitch McConnell, the Republican majority leader who will determine the terms of the trial, wants the case to be considered without testimony.

But Democrats say new witnesses should be heard in the Senate, including at least four current and former White House aides with knowledge of the Ukraine affair.

They want Mr McConnell to clarify whose testimony will be allowed.

Nancy Pelosi, the Democratic Speaker of the House, has postponed sending the impeachment charges to the Senate until the rules of the Senate trial are acceptable to her party.

Mr Trump tweeted on Sunday that the Democrats’ case in the “impeachment hoax” was “dead” and called Ms Pelosi “crazy Nancy”.