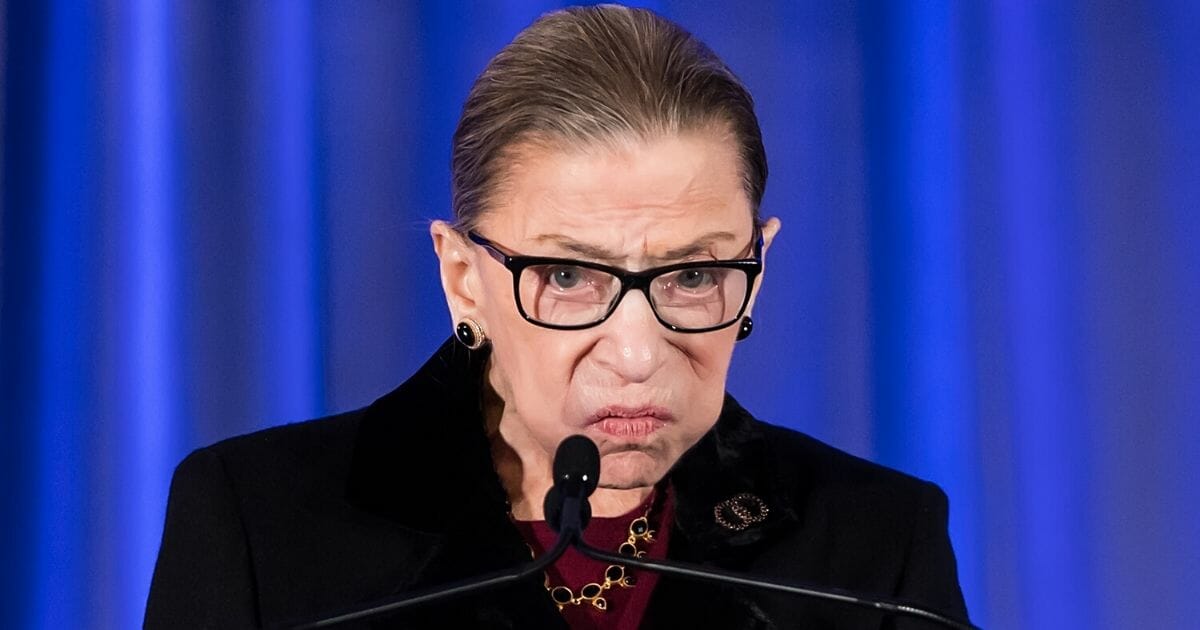 What if you had an impeachment trial and nobody showed up to vote on it?

That’s at least what Supreme Court Justice Ruth Bader Ginsburg is suggesting. Not in so many words, mind you — but the subtext is certainly there.

So a bit of context before the remarks by the Notorious RBG: A few days ago, basically noting the politicized nature of the debate, Senate Majority Leader Mitch McConnell said that he couldn’t consider himself an “impartial juror.”

“I’m not an impartial juror,” McConnell said. “This is a political process. There is not anything judicial about it. Impeachment is a political decision.”

RBG, meanwhile, said that she thought that there should only  be “impartial jurors” during an impeachment hearings.

“The House indicts, and the Senate tries. Should a trier be impartial? Of course, that’s the job of an impartial judge,” she said during an interview with the BBC before Trump’s impeachment.

However, the BBC’s Razia Iqbal said that it was “problematic” some senators had already said they’d made up their mind.

“Well, if a judge said that, a judge would be disqualified from sitting on the case,” Ginsburg said.

Well, senators aren’t judges, they’re jurors, if you want to use this labored metaphor. Beyond that, however, the same rule applies to jurors. So does this mean Mitch McConnell has disqualified himself?

Only if every almost every other senator disqualifies himself, too.

First, let’s face facts about this: McConnell was right about this being a political process.

So that being said, who in the upper chamber isn’t political? I mean, we saw what happened in the House of Representatives. The Democrats may want to pretend that this was a fair process in terms of impeachment, but the process says that’s a lie.

Those of you who sat through the Democrat debate Thursday may have noticed that untalented moneybags Tom Steyer — who hopefully kept receipts for the amount of money he blew through to make the debates — mentioned that he had been trying to impeach President Donald Trump since pretty much day one as if it were a badge of honor. You can imagine Nancy Pelosi going Col. Tom Parker and shooting out her TV (presumably with an Airsoft gun, given her position on gun control) when he said that.

Because, as we know, Democrats are very serious about impeachment. They’re very somber. There’s never been a more somber and serious moment in the House of Representatives than when the Democrat-controlled body impeached the president, which is why Pelosi had to do this:

RELATED: Warren’s Viral Debate Performance Turns Out To Be Rife with Hypocrisy: ‘I Do Not Sell Access to My Time’

The look Nancy Pelosi gave her caucus when some Dems started to applaud after she announced the first article of impeachment passed is a look I know well as a fellow mom of five. pic.twitter.com/PWLT5aXqPQ

Very serious, those Democrats. Jean-Paul Sartre-serious. They’re not partisan. They’re not celebrating this at all.

And that’s the problem. You’re going to disqualify McConnell, Justice Ginsburg? All right, fine. However, openly expressing bias isn’t the only bias there is.

Democrats have made it clear, for the most part, how they’re going to vote. So have Republicans. Both sides are fundraising off of this. Save for a Col. Jessup moment in the Senate trial — “You’re g–d— right I ordered the aid withheld unless they got Biden convicted!” — there’s no chance of any sort of conviction.

And yet, even though almost everyone in the Senate has an indicia of bias, we’re supposed to pretend that this is a real trial. Even though everyone in the House of Representatives was biased and had clearly made up their minds before the vote — just look at the remarks made in the impeachment inquiry committees.

So, let’s go by Ginsburg’s rubric here. No one with an identifiable bias should be allowed in the Senate impeachment trial. She thinks it’d just get rid of McConnell — a huge boon for the Democrats. What it would end up being is one of those Italian soccer matches where the entire stadium is empty because the crowd’s been banned due to prior hooliganry.

Do you buy RGB’s comments on the impeachment trial?

Unlike the racist, brainless Italian soccer ultras, however, the senators are kind of required, inasmuch as they’re the ones who are going to vote on this.

If you want you want to exclude biased jurors from this, look at Senate Minority Leader Chuck Schumer, who wants to call witnesses so this will be exactly the same circus that the House impeachment was. Look at the Democrat senators on the campaign trail for president who’ve made it clear they think the president has violated the law.

For that matter, look at pretty much everyone in the upper chamber.

If RBG wants an empty Senate chamber, I say go with this line of thinking. Otherwise, this is nothing more than the most liberal member of the Supreme Court again weighing in legislative matters apparently beyond her ken.

Do you think this is a conpelling argument for the teacher/? Scroll down to comment below.