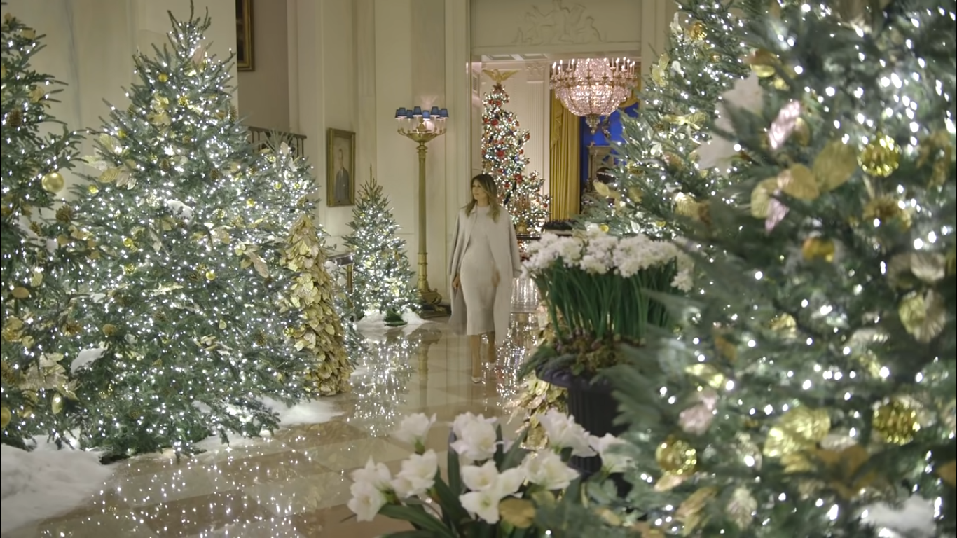 Once upon a time, the New Republic was a respected journal of political thought. Its decline accelerated under the ownership of Facebook-enriched Chris Hughes, and nothing has changed now that liberal banking heir Winthrop McCormack, bought the failing periodical three years ago.

Take, for example a December 19 screed by David Roth, who “was an editor at Deadspin,” the left-wing sports blog. Roth’s verbose critique of Melania Trump’s Christmas-decorations video was titled  “A Unified Theory of the Trumps’ Creepy Aesthetic.” Roth implies the Trumps have caused a rip in the fabric of the universe, as revealed in the subtitle: “The bloodless exorbitance of the White House’s Christmas stagecraft reveals a deeper truth about the presidential couple.”

To observe that Melania’s Christmas videos—here is last year’s—are unlike any previous video of this kind is an understatement; to say that they are unlike any previous video of any kind is probably closer to the truth. In their combination of chockablock Yuletide clutter and frosty and unsettling feel, the Trump White House Christmas videos are deeply uncanny: Imagine a Hallmark movie directed by Stanley Kubrick and you’re getting there.

The polarizing corridor lined by a dozen blood-red Christmas trees last year is just as busy but perhaps inevitably a bit less forbidding this time around, although the broader look and feel of the design and video are the same. Melania strides through the White House’s halls in an overcoat and high heels, unaccompanied but observed at a respectful distance by various staffers. Meanwhile, the sort of music that usually plays in television commercials under the words Toyota’s Year End Sales Event twinkles determinedly on the soundtrack. At the end of this year’s, she personally seasons some ornaments with fake snow.

All this outrage over a Christmas video of less than a minute? But wait…there’s more! The foam is just starting to form around Roth’s mouth as he reveals more about the sad state of a mind that can work itself into such a fury over a short Christmas decorations video:

For however narrowly its purpose can be defined—the Fox-damaged and proudly un-churched Trump has mostly leaned on Christmas as a culture-war totem gleefully invoked as a lib-triggering synonym for “holidays”—the decorative ritual is mostly a way to celebrate a season of giving and sharing with other people.

It is, to state the obvious, not surprising that such a thing would not come naturally to people as insular and proudly selfish as the Trumps. But, as with everything else having to do with Trumpian aesthetics, it’s easier to assess the undergirding thought process here through its failures than its successes…. But the chilly excesses of Melania’s Christmas decorations and the ghostly abstraction of these videos reveal just how much further outside all such nonproprietary conventions the Trumps are than previous inhabitants of the White House have been.

Roth sees the decorations as “lib-triggering” and he sure proved to be a lib who was most definitely triggered by the video, even though it contained nothing overtly political at all.