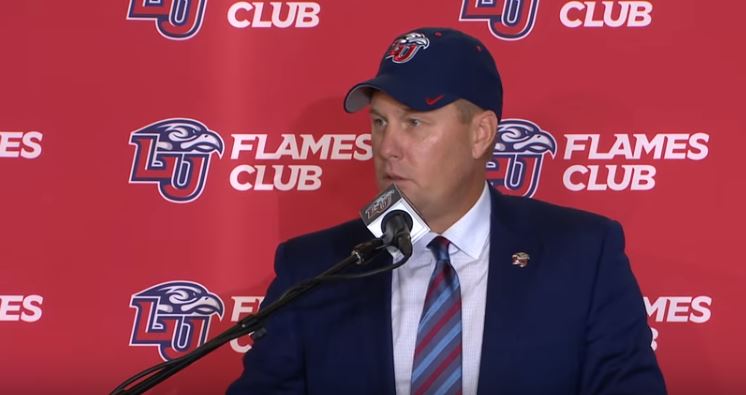 Liberty University, the school the Left loves to hate on, won its first bowl game ever Saturday. School founder Jerry Falwell Sr. once envisioned this program rivaling Alabama’s and Notre Dame’s, and while the Flames have a long way to go to reach that point, they were prime for a torching the day before facing Georgia Southern, by Jordan Ritter Conn, a blogger for The Ringer.

Conn and some liberal Liberty students took on university’s Christian identity, President Jerry Falwell Jr.’s leadership and his friendship with President Donald Trump and the controversial hiring of an athletic director and head football coach who were embroiled in scandal at their previous schools.

Though his father founded the Reagan-era Moral Majority, solidifying the alliance between evangelicals and the Republican Party, Falwell Jr.’s “public comments focus far more on a Trumpian brand of conservative politics than on any expressions of faith. He has built the once-modest university into a national brand, using revenue from online education to fund a building boom on campus. It is a university founded on evangelical Christian theology, led by a president spreading nativist politics …,” Conn writes. Falwell Jr. is also referred to as a “dictator.”

The head football coach is Hugh Freeze (seen at press conference announcing him as the new Liberty football coach), outspoken about his faith, a man who led the program to new heights, and who previously left the University of Mississippi in disgrace. Liberty “was the one school that offered me the opportunity to step back in as head coach,” Freeze said.

Liberty is a place where people like Michael Vick and Ray Rice have come to get forgiveness from the public, and so did Freeze last summer. Conn writes Freeze made only vague references to his scandals at Ole Miss. “Can you have a genuine faith,” Freeze asked, “and have a season in your life when you struggle with a sin?”

“Forgiveness is, after all, baked into the core of evangelical Christian theology, which teaches that Jesus’s crucifixion served as atonement for all of humanity’s sins, and that anyone who asks God for forgiveness is saved from punishment for those sins,” Conn explains. Freeze asked for, and received forgiveness, from students at the chapel. Conn seems miffed that the coach wouldn’t give him specifics of his sins at Ole Miss.

Liberty Athletic Director Ian McCaw also has a past. In 2016 he resigned as AD at Baylor, whose football team unraveled over “a pattern of sexual violence” by football players and coaches looking the other way.

Falwell got upset when Conn asked him about McCaw’s handling of sexual assault reports at Baylor. “We did a lot of due diligence,” he says, “and I believe in him. We looked into it and couldn’t find where he had done anything wrong. And everybody we talked to on the board down there said, ‘He will never embarrass you. He’s golden.’”

But to Joel Schmieg, the former sports editor of Liberty’s student newspaper, The Liberty Champion, Liberty was putting sports above everything, “just like any other school. It was like, ‘What do I do now? How do I root for this? It’s my own school, and I don’t even want to root for them anymore.’ ”

A liberal student, Hannah Hartsook says, “Most people took a really defensive stance on it. They either said he did nothing wrong, or they said, ‘We’re supposed to be Christians and forgive.’ As a Christian university, we should be holding leadership to a higher standard. But it feels like we’re not.”

Conn also focuses on Falwell’s public identity “as a Trump-promoting talking head, appearing regularly on camera to defend the president on everything ranging from charges of stoking anti-Semitism to criticisms of his personal morality after the release of an Access Hollywood tape in which Trump bragging about ‘grabbing’ women ‘by the pussy.’ ” Conn says:

“Falwell used the same defense of Trump then that he has used so many times since, the same defense that seems to follow so many around campus. ‘We’re all sinners,’ he says. ‘People say, ‘How can you support a sinner like Donald Trump?’ We’re all sinners. Come on now. Nobody’s better than anybody else.’ Here, again, is the tension between the Christian compulsion toward forgiveness and the Christian compulsion toward just doing the right thing.”

Hartsook told Conn that Liberty is excusing sin. “Forgiveness is used as a manipulative tool. It’s like, ‘Forgive me because the Bible says so, even if I never have to take responsibility for anything I did wrong.’”

Conn agrees, writing, “Falwell uses Jesus’s words as justification for his support of Trump. Yet the core of what Jesus taught centered on embracing the stranger, caring for the poor and the sick. … How does Falwell reconcile his faith with his support of a president who has consistently spoken ill of racial and religious minorities in this country, who has drawn the support of white supremacists, who has built much of his political identity around policies of keeping those less fortunate strangers from entering our country?”