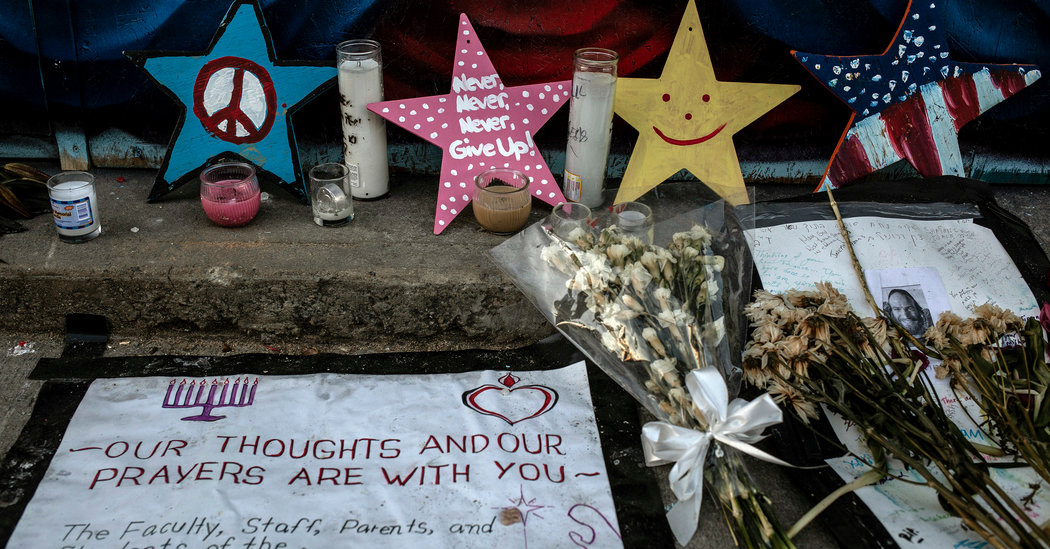 Now the market is boarded up, spray-painted with a mural of a blue heart and the Pulaski Skyway bridge.

But Rabbi Moshe Schapiro, one of the organizers of a menorah lighting at the market on Sunday, at the start of Hanukkah, had a hopeful message.

“The first night of Hanukkah at the very place of this shooting, which created so much darkness and negativity, can bring light and positivity,” he said. “When we celebrate at a time like this, almost two weeks from a terrible shooting, we start thinking about what’s the meaning of the holiday.”

The menorah lighting is a central part of Hanukkah, which celebrates the victory 2,000 years ago of the Jewish Maccabees in their battle to regain Jerusalem from the Syrians. The menorah used to cast light as they rebuilt the temple there had enough oil to burn for only one night but instead lasted for eight.

On Sunday evening, a small silver menorah and boxes of doughnuts sat on a folding table in front of the market.

A little after 6:30 p.m., Yoely Greenfeld stood at the table, just a few feet away from where his sister, Leah Mindel Ferencz, was killed. With a red lighter, Mr. Greenfeld touched a flame to the candle in the center of the menorah.

Children surrounded Mr. Greenfeld and Rabbi Schapiro, who used both hands to shield the candle from the wind. One girl recorded them with an iPhone. Seconds later, after the wind settled, the first candle was lit.

“My sister Mindy was someone who lit up the world with her smile and her beautiful personality, brightening lives both in Brooklyn and in her new home, Jersey City,” Mr. Greenfeld said. “As we celebrate Hanukkah, may the lives of our candles shine away the darkness, easing the pains of all those who have suffered.”

Mr. Greenfeld lit another candle, which he held in his hand as he chanted blessings and the crowd sang along. Then he placed the lit candle in the top right corner of the menorah.

Bouquets of flowers and posters were below the mural. One had the name Douglas Miguel Rodriguez, in memory of a market employee who had emigrated from Ecuador and was killed during the rampage. There were dozens of handwritten messages. “I miss his smile,” one read.

After the lighting ceremony, Martha Freire Carrasco, Mr. Rodriguez’s wife, stood by her husband’s memorial and held back tears. It was the first time she had returned to the site since the shooting, she said.

Standing there resurfaced bad memories, she said, but seeing the messages of support comforted her. When she read the message about her husband’s smile, she could not help but smile herself.

“That’s the smile I fell in love with,” Ms. Freire Carrasco said. “My husband was love.”

There were also scores of messages for Moshe Deutsch, a 24-year-old student killed in the attack. “May God rest your soul in eternal life,” one message said. “We love you,” read another.

The rabbi said that though the community had been shaken by the attack, he and other Jews still felt safe in Jersey City.

Bryan Leib, a board member with Americans Against Anti-Semitism, said he had come from Brooklyn to celebrate the first day of Hanukkah and to shine some light after two rough weeks.

“The Jews, we are very resilient people and we’ve always had to be,” Mr. Leib, 34, said. “I’m sure no one will be leaving anytime soon. When things like this happen. We don’t run away. Jews don’t run.”

Marissa Cossolini, who lives with her husband one block away from the scene of the shooting, said her family had no plans to leave the neighborhood. They still felt safe, she added.

“This is definitely not what defines Jersey City at all, which is why it’s so shocking,” Ms. Cossolini, 24, said.

She added: “Being present definitely shows something. We are one as a community.”

But it is hard to ignore a growing unease among Jews as reports of anti-Semitic attacks in the New York region rise.

Last week, just days after the kosher market shooting, a Jersey City school board member called Jews who moved to the city “brutes” and suggested a deeper “message” about the attack in a Facebook post. The city’s mayor, Steven Fulop, condemned the post on Twitter.

A bias incident report published by the New Jersey State Police and the state attorney general’s office found that 35 percent of the 569 reported bias incidents in 2018 were motived by the victim’s religion. In 2018, 172 anti-Jewish incidents were reported in New Jersey, the same number reported in 2017, the report added.

“Between 2006 and 2018, Jews were the religious group most frequently targeted in reported bias incidents,” the report said.

On Dec. 10 in Jersey City, David N. Anderson, 47, and Francine Graham, 50, rushed inside the only kosher supermarket in the area, which served a growing Hasidic community, and opened fire on customers and employees.

A prolonged gun battle followed as the couple traded fire first with two police officers on patrol, then with law enforcement officers called in from Jersey City and neighboring jurisdictions. Rapid gunfire could be heard echoing around the area, which is across the Hudson River from New York City, as residents ran and took shelter.

Nearly three hours later, Ms. Ferencz, 33, who owned the store with her husband, Mr. Rodriguez, 49, who worked stacking boxes and making sandwiches, and Moshe Deutsch, 24, a customer, were dead inside the market, as well as the attackers.

Joseph Seals, a detective with the Jersey City Police Department, was killed by Mr. Anderson and Ms. Graham after approaching them at a nearby cemetery before they drove to the kosher market. The two officers on patrol, Mariela Fernandez and Ray Sanchez, were injured. One was struck in the torso, the other in the shoulder.

The lighting on Sunday also served as a ceremony to pay tribute to Officers Sanchez and Fernandez, who prevented many others from dying, Rabbi Schapiro said.