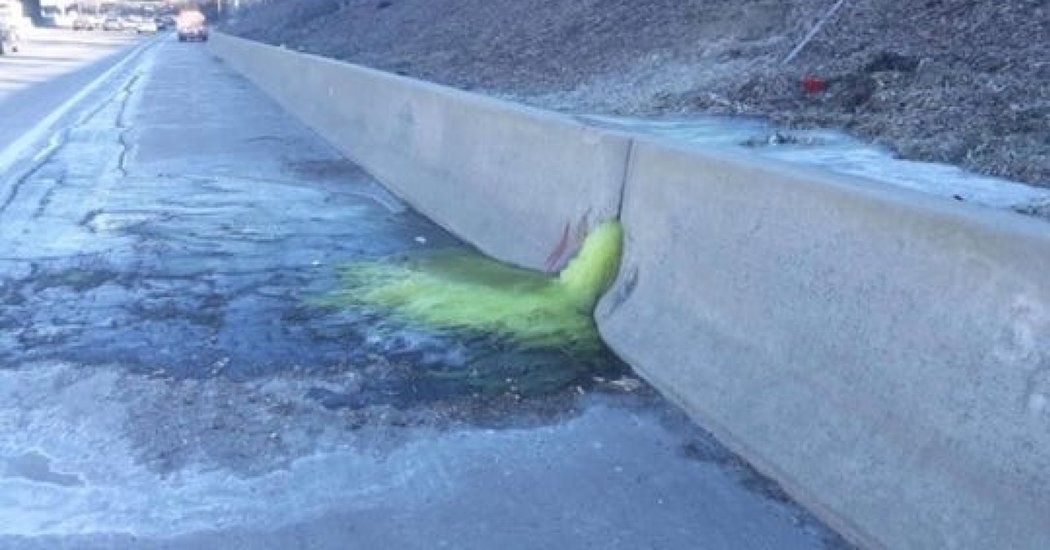 A peculiar sight greeted motorists on a busy freeway outside Detroit on Friday: a bright green liquid oozing from a retaining wall on Interstate 696.

Its appearance snarled traffic and prompted lane closings to allow for a hazardous materials cleanup that started on Friday and could last for several more days, Michigan environmental officials said.

The mystery substance is believed to be hexavalent chromium, said Jill A. Greenberg, a spokeswoman for the Michigan Department of Environment, Great Lakes, and Energy.

“It’s a serious situation,” Ms. Greenberg said on Sunday. “Clearly, this site needs to be cleaned up.”

She emphasized that there was “no imminent risk to the public,” and that hazardous materials crews determined that the air and public drinking water had not been contaminated.

Hexavalent chromium is a cancer-causing manufacturing component that was featured in the 2000 movie “Erin Brockovich.” Julia Roberts played Ms. Brockovich, an environmental activist and a central figure in a class-action lawsuit in the 1990s about groundwater contamination in California.

In Michigan, the green liquid was traced to a nearby plant, Electro-Plating Services Inc., in Madison Heights, Mich., Ms. Greenberg said.

The state shut down the site in 2016 for improper storage of hazardous materials and it had already been designated as a Superfund cleanup site, The Detroit Free Press reported. The company’s owner, Gary A. Sayers, and his company pleaded guilty in February to illegally storing hazardous waste, according to federal prosecutors.

Mr. Sayers was sentenced to one year in prison and ordered to pay nearly $1.5 million in cleanup costs.

A lawyer for Mr. Sayers did not immediately respond to a request for comment on Sunday.

The chemicals had been stored in a pit in the basement of the plant, which Ms. Greenberg said was up from the highway embankment. Cleanup crews on Sunday were using a sump pump to remove the liquid.

It was not immediately clear who first reported the green liquid to the Michigan Department of Transportation, which said it was checking into the episode.

The interstate is north of Detroit and runs east-west. As of Sunday night, the eastbound lanes of Interstate 696 had reopened but barriers remained along the shoulder where the liquid had oozed onto the roadway.