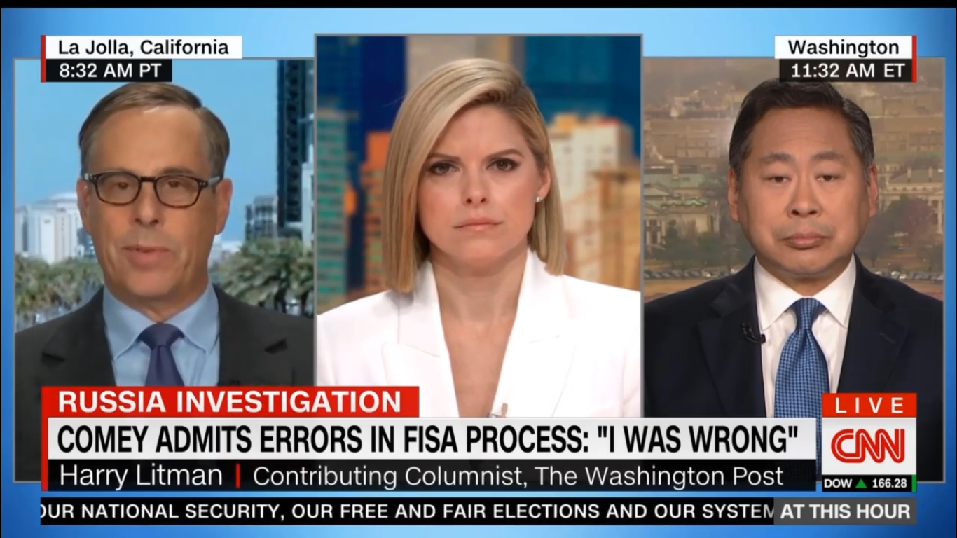 Imagine that the biggest takeaway you got from the FBI FISA abuse scandal which was revealed last week by Department of Justice Inspector General Michael Horowitz last week in his report was that this gives President Trump a “huge talking point.” That was the observation of Washington Post contributing columnist and former U.S. Attorney Harry Litman.

He revealed his extreme Trump obsession to Kate Bolduan, host of CNN’s At This Hour on Monday.

KATE BOLDUAN: Harry, I would say that this all puts an even brighter spotlight on the FBI Director now, Christopher Wray. I mean what changes he does or doesn’t make and what it looks like going forward. You agree?

Litman agrees but quickly turns to the subject that absolutely obsesses him despite the fact that as a former U.S. Attorney you would figure he would be primarily concerned with the FISA abuses which he quickly glosses over.

HARRY LITMAN: Yes but there’s a real problem here. He’s acting impeccably. He’s owned up to it and he’s made changes. That’s happened before. The real risk here is that the headline that you identified, Kate, will get obscured now….The bigger point of there being adequate predication and no bias will now be obscured and Trump has this huge talking point that he’s already galloping away with to say, you know, oh look they screwed up.. I was right. It was wrong from the beginning which is not the case but that’s the real worry. Wray has a spotlight on him and Trump, of course, seems to have possibly his scalp in his sights but but Wray is acting appropriately and everyone at the FBI is acknowledging the professional mistakes. Very very different though from the charges that have they’ve been cleared of.

You mean the charge of political bias? Ironically, even though Litman is wearing his bias against Trump on his sleeve, if he were still a U.S. Attorney and asked if he were biased against Trump, he would probably answer no and according to the rules Horowitz followed, he would be declared to have had no political bias…despite having as much political bias as, say, Peter Strzok or Lisa Page or Andrew McCabe.

LITMAN: … 99% of these things are approved. We’ve always said, well that’s because they do it so right but maybe that’s not so. Maybe sometimes the court is snookered. That’s a big worry but of course it’s a worry here for Carter Page and not for Donald Trump. I just want to underscore that.

Of course, a couple of years ago in February 2018, Litman did not seem at all concerned by reported FISA abuses. Instead he viciously smeared the one who revealed those abuses in his memo, Congressman Devin Nunes, for producing a “shoddy sham of a memo,” as you can see here from MSNBC.