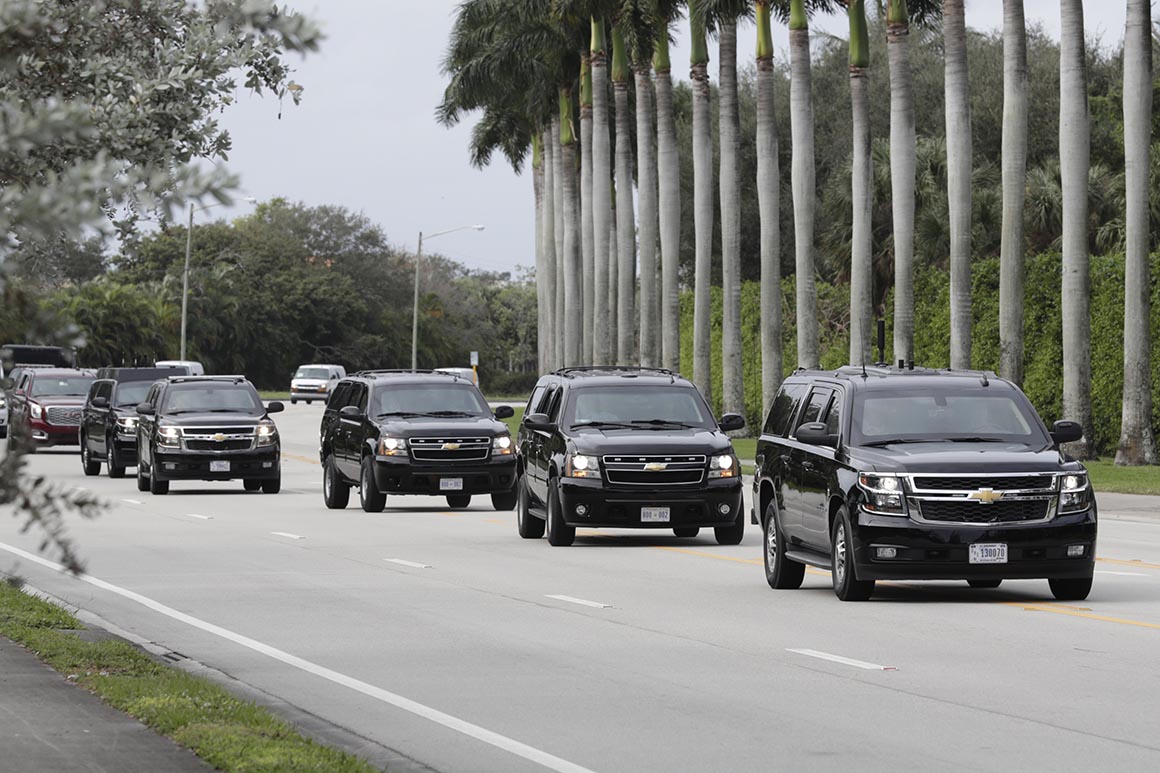 For aides, Mar-a-Lago can sometimes be a headache, as there is less control over who gets face time with the president and who might be able to whisper an idea in his ear. But that’s the way Trump likes to be, unfettered and able to do what he loves best — playing host, golfing with friends, watching television and working away from the confines of the West Wing.

On Friday, two days after being impeached by the House, the president was welcomed home to applause by a who’s who in MAGA world. The conservative group Turning Point USA’s Student Action Summit on Saturday brought his biggest supporters to town at a historic moment in his presidency, and Trump was happy to see his old friends from New York back in Palm Beach for the holidays.

The weekend seemed designed to boost the president’s mood — the chance to air his grievances and give a speech to a friendly and enthusiastic audience of young supporters, golf with friends like conservative radio firebrand Rush Limbaugh and PGA player Jim Herman, and mingle with his biggest fans in the lavishly decorated halls and ballrooms of his resort.

At Mar-a-Lago on Saturday night, the president stopped by a party themed after Studio 54, the nightclub he used to frequent in New York, and was surrounded by his family, former White House press secretary Sarah Sanders, Fox News’ Laura Ingraham, Turning Point USA’s Charlie Kirk and Candace Owens, radio show host Howie Carr (who described Trump as “in great spirits”) and even his personal attorney Rudy.

Members of Trump’s administration — including Kellyanne Conway and the president’s daughter and senior adviser, Ivanka Trump — have dodged questions about whether or not they think Giuliani, who is under federal investigation, is good counsel to the president.

The president and first lady Melania Trump also met with retired Navy SEAL Eddie Gallagher and his wife. In a move last month that resulted in the resignation of Navy Secretary Richard Spencer, Trump intervened in Gallagher’s war crimes case and reversed a demotion that would have taken away his Trident pin. On Instagram, Gallagher’s wife, Andrea, said they were able to say “thank you” to the president and present “a little gift from Eddie’s deployment to Mosul.”

Trump was described as cheerful, smiling for photos with fans and touting a boost in ratings as he made his way from table to table in the dining room saying hello to guests and friends.

“I’m up 6 points in the polls!”he told members.

The president’s sons Eric and Don Jr. were also spotted at the club, while Ivanka, who is known to mostly keep to herself, stayed away from the crowds.

A small group of aides, including acting chief of staff Mick Mulvaney, press secretary Stephanie Grisham and national security adviser Robert O’Brien, traveled with Trump to Florida for the weekend before Christmas, although more are expected to join later to keep the president up to date on the potential Senate impeachment trial.

Until then, the president has mostly seemed happy to be taking a break from the rancor between the White House and Democrats on Capitol Hill.

“He’s just a little a little bit sad there’s not so much sunshine to play golf the way he wants to,” Lombardi said.