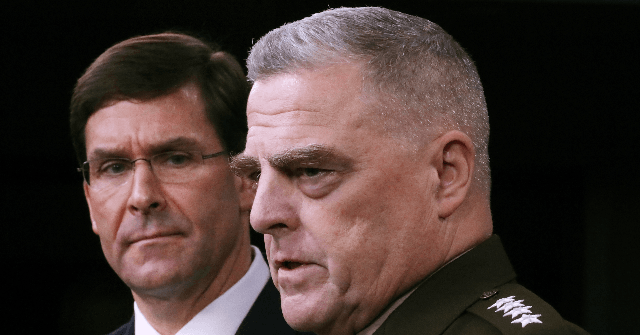 Pentagon leaders at a press conference on Friday pushed back against the idea that the department’s leaders have not been transparent on progress in the Afghanistan War, following the publish of interviews that showed that officials claimed more progress than there was over the last 18 years.

The interviews, conducted by the Special Inspector General for Afghanistan Reconstruction (SIGAR) and published by the Washington Post, were a look-back at the war since 2001, but current Defense Secretary Mark Esper and Chairman of the Joint Chiefs of Staff Army Gen. Mark Milley served in various government roles since then and spoke from their perspectives.

Both pushed back against the idea that there was any coordinated effort to deceive the public.

“I know that I and many, many others gave assessments at the time based on facts that we knew at the time and those were honest assessments and they were never intended to deceive neither the Congress nor the American people.”

Esper added, “For 18 years now the media has been over there, many of you have traveled multiple times, the Congress has been there are multiple times …We have had [SIGAR] there.”

“This has been a very transparent — it is not like this war was hiding somewhere and now all of the sudden that there’s been a revelation,” he said.

President Trump campaigned on bringing troops home from Syria and Afghanistan, but received swift and bipartisan pushback from the Senate in January when he ordered a drawdown of 7,000 troops from the roughly 14,000 there at the time, and 2,000 troops from Syria.

Senators voted 70-26 to express their strong disapproval to the plans.

However, since then, Trump has ordered all but approximately 800 troops to depart from Syria, after Turkey invaded northern Syria in early October, threatening the safety of several dozen U.S. troops stationed there.

Esper at the press conference Friday said the Pentagon would not lose sight of the Middle East but that the focus is on long-term competition with China and Russia.

But both he and Milley could not predict when the missions in Afghanistan or Syria would end.

Esper said the mission in Afghanistan is to ensure that it “never again becomes a safe haven for terrorists.”

“We have a mission in Afghanistan, that is to ensure that it–no–never again becomes a safe haven for terrorists. So until we are confident that that mission is complete, we will retain a presence to do that,” he said.

Milley said the war would only end with a political solution between the Taliban and the Afghanistan government.

“There is only one way that this is going to end and it is a negotiated solution with the Taliban and it is going to have to be an Afghan-to-Afghan solution. That is what we have been saying for years,” he said.

As far as how long U.S. troops would be in Syria, both Esper and Milley could not say.

“That’s a crystal ball that I don’t have,” Esper said. “I think we are there as long as we can ensure the enduring defeat of ISIS or we get other allies and partners to step in and help offset us or…that the ISIS can be controlled, its elements can be controlled by local police or security forces.”

Milley said when the U.S. can ensure the enduring defeat of ISIS “then I think the president will be apprised of that. And at that point, we’ll probably come out.”

None of us want forever wars. It has to do with national interest. It has to do with the realistic appraisal of what adversaries and enemies of the United States of America are doing and what their threats are to America. And we weigh the costs, the benefits, and the risks associated with that. And that’s why we are where we are in the various parts of the world.

On whether the U.S. was throwing “lives away” in Afghanistan, Milley responded, “Absolutely not.”

“Our original objective going in to Afghanistan on 7 October 2001 was to prevent Afghanistan from ever again becoming a platform to launch terrorist attacks on the continent of the United States and that is what we set out to do and to date that has been successful,” he said.

“That is not the only criteria but I do not, absolutely do not — I could not look myself in the mirror, I couldn’t answer myself at two or three in the morning when my eyes pop open and see the dead role in front of my eyes so no, I don’t think anyone has died in vain,” he added.