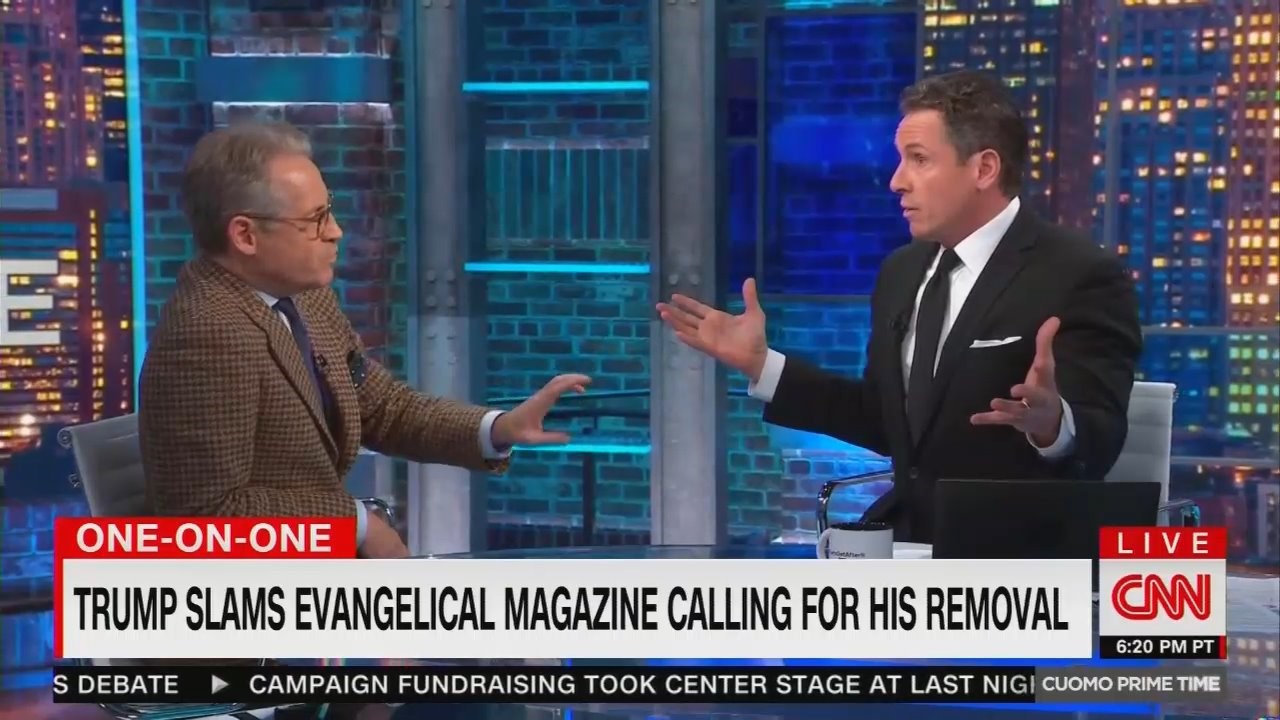 Christian radio host Eric Metaxas took on a big job when he agreed to try to explain to CNN’s Chris Cuomo on Friday night why an evangelical Christian or a Catholic would vote for Donald Trump and not somehow be a terrible Christian.

Metaxas began by suggesting it’s like hiring a pilot. He’d like a pilot who’s in a stable marriage, but what if an often-divorced pilot is also an excellent pilot? Cuomo couldn’t stand the analogy, because Bill Clinton was impeached for adultery (or so they still claim on CNN).

METAXAS: The day Hillary Clinton was chosen as the standard-bearer for the party and Trump was chosen, most people had a tough choice. It was not, you know, it was not Ronald Reagan and Mondale or whatever it was. It was a tough choice for everybody. So you had to think hard about what matters. And I think that given the track record of Hillary Clinton, a lot of people, like myself, were scared to death at the thought of a Clinton presidency.

Later, Metaxas asked Cuomo if Catholics would be violating their faith to vote for a pro-abortion candidate. Cuomo said no, because we “live in a secular society.” So why is demanding evangelicals can’t vote for Trump? Cuomo implied Trump’s personal behavior should disqualify him among Christian voters.

Cuomo slammed Christian radio host Eric Metaxas as “anti-choice” on abortion. Metaxas said he was “anti-murdering the unborn.” It was fun to see Metaxas point out Cuomo’s brother Andrew signed a law in New York that legalized third-trimester abortions.

Metaxas said “By the way, you’re — you happen to be related to somebody who took a stand on this about a year ago.” Cuomo shot back “All New York State did was codify Roe v. Wade. That’s sophistry. That is taking a point and twisting it to upset people of faith. Why do that?” Metaxas said “Because it’s true.”

Cuomo claimed he’s “not a scientist,” so he can’t proclaim when an unborn baby is human. Metaxas replied “My wife and I go to get an ultrasound, we see the baby, four months along, and we go, That’s our baby, that’s our daughter.” Cuomo said “a lot of candidates who believe what you believe in when it comes to reproductive rights,” so “Why get behind a man who makes a mockery of your faith?” Metaxas replied “I certainly don’t think — most people that I know do not think he makes a mockery of our faith.”