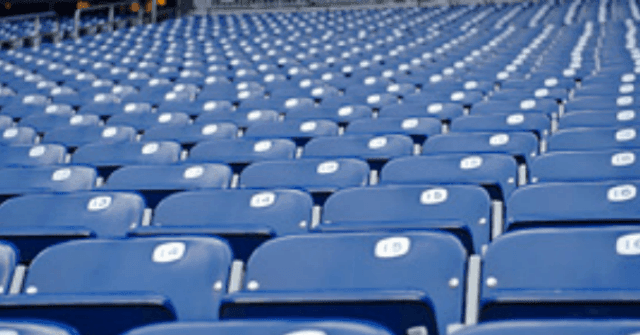 With only one more week of regular season play to go, it does not seem as if the NFL got its holiday wishes for full attendance at their games.

With some time still to go at press time at Lincoln Financial Field, a mid-air shot of the Philadelphia Eagles game seemed to show quite a few empty seats when the Dallas Cowboys came to town:

Proof of how far the @NFL has fallen. Look at all the empty seats in the 1st quarter of 2 teams fighting for the NFC East title. One of them is “America’s team” even, the @dallascowboys I can’t wait until this league dies and gets back to its roots. pic.twitter.com/osajBoNtnV

The Cleveland Browns’ FirstEnergy Stadium also came in for some finger pointing when the Baltimore Ravens winged in to cream the home team 31-15:

Next, as always seems to be the case, fans noticed the empty seats at FedEx Field when the New York Giants beat the home team Washington Redskins 41-35:

I’m sure if you walked up to the gates right now, they’d probably just let you walk in. Those who bought tickets and showed up, however, are almost exclusively #Giants fans. pic.twitter.com/LFVXJKJtVz

@Redskins place getting more empty every week. And seats getting more taken out every year. #WakeUp #HTTR pic.twitter.com/JnIdVgK6KN

The Miami Dolphins pulled a squeaker 38-35 win over the Cincinnati Bengals at Hard Rock Stadium, but some fans thought it was hard to get fans in the seats:

Another perennial problem child is the Los Angeles Chargers, losing to the Oakland Raiders at halftime when we went to press. Fans saw many empty seats at StubHub Center:

Probably not shown on tv, a lot of empty premium seats at 50 yard line on #Chargers side. #raiders pic.twitter.com/uXXmk4A54h

When you thought you were going to a Chargers home game, but accidentally end up at a Raiders home game in LA @ScottKaplan @ScottandBR @DSmithShow @MartyCaswell pic.twitter.com/xi2siVrPeU

And look at the “home” side

The Denver Broncos’ Empower Field at Mile High came in for some slings and arrows, too, over its empty seats before the game against the Detroit Lions was over:

I know there are quite a few empty seats, but I’m impressed by those faithful to the Broncos. pic.twitter.com/9lF0pUqYR3

Great Day for some early Winter football!!! 65ish and sunny!! A LOT of EMPTY seats tho!!! Where is #Broncoscountry?? pic.twitter.com/frJOyM5IxR

Lions @ Broncos RT @ryne_wille: @[me] 2:00 left in the first pic.twitter.com/7CGtpjHqHP

How many empty seats today? pic.twitter.com/XsUKYx84jZ

The Indianapolis Colts toppled the Carolina Panthers in a lopsided 38-6 victory at Lucas Oil Stadium, but fans were wondering where everyone was at:

Finally, one team that has taken a beating over its empty seats all season is the Atlanta Falcons. And once again, Mercedes-Benz Stadium came in for some pointed remarks even though the Falcons beat the visiting Jacksonville Jaguars 24-12:

The view at kickoff.
Somewhere short of capacity. pic.twitter.com/kCaxA82EBq