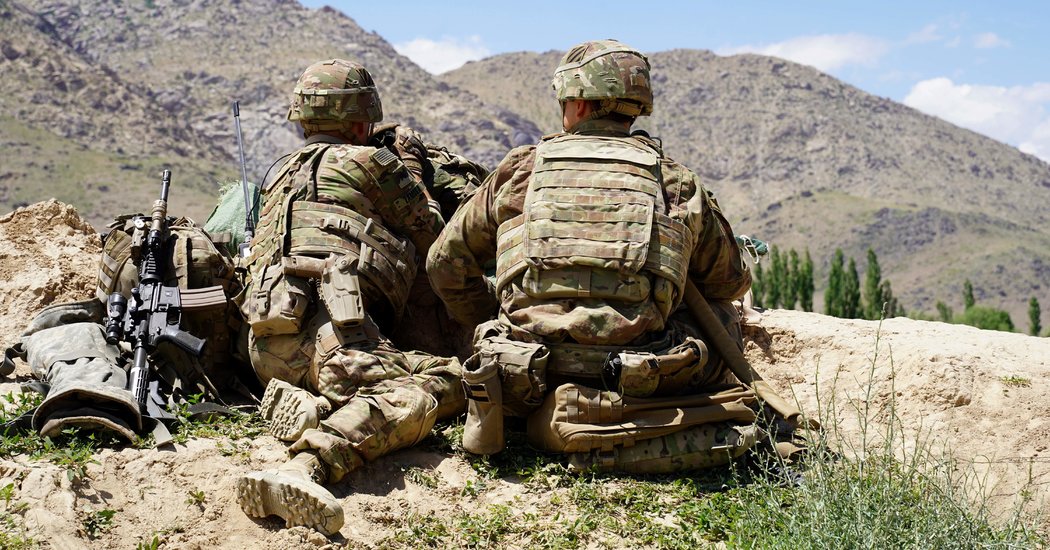 WASHINGTON — An American service member was killed in Afghanistan on Monday, according to military officials, bringing to 20 the number of troops who have died during combat operations this year.

The service member’s death is a grim reminder that more Americans have died fighting the Taliban and other insurgent groups in 2019 than in any other year since 2014, when the Pentagon euphemistically announced the “end of combat operations” in the country. Thirteen troops were killed in 2018, and 11 in 2017.

In a news release, the American-led mission in Afghanistan provided little detail about the episode or the service member’s identity pending notification of next of kin.

The Taliban claimed responsibility for the killing. Zabihullah Mujahid, the Taliban spokesman, said the service member was killed in Kunduz Province, when the insurgents targeted American and Afghan forces with explosives.

Social media accounts affiliated with the Taliban shared photos of what they claimed were the identity badge of a United States Army soldier, a sergeant, and photos of his bloody uniform.

The service member’s death comes at a politically tumultuous moment, as Gen. Austin S. Miller, the commander of the American and NATO-led mission in Afghanistan, navigates support for the Afghan military. He is also contending with a potential troop withdrawal and restarted peace negotiations between American diplomats and Taliban officials in Qatar.

An initial agreement between the two sides was abandoned by President Trump in September after a car bomb in Kabul killed an American soldier, a NATO soldier and 10 others. The loss of more Americans at this point in the 18-year war could derail the process once more, military officials said.

In November, two soldiers were killed when their helicopter crashed in Logar Province while providing air support for American troops below. It is unclear if enemy fire caused the crash, though initial statements from the American command seemed to indicate otherwise.

And this month, the Taliban launched a daring dawn attack on Bagram Air Base, the largest American base in Afghanistan. No Americans were killed, but the gunmen held out in a hospital just yards away from the base’s confines before airstrikes ended the nearly 12-hour standoff.

There are 12,000 to 13,000 American troops in Afghanistan, though Defense Secretary Mark T. Esper has said that the number might drop to 8,600 absent any agreement with the Taliban. The White House had initially planned to start withdrawing troops as part of the nearly announced deal with the Taliban in September.

“We have a mission in Afghanistan,” Mr. Esper said during a news conference Friday at the Pentagon. “So, until we are confident that mission is complete, we will retain a presence to do that.”

The United States’ strategy in Afghanistan has changed little in the last year, and is rarely mentioned by either the Pentagon or the American-led mission in the country. As it stands, General Miller has marshaled what resources he has at his disposal to aggressively attack the Taliban, along with the Islamic State offshoot in the country, backed by thousands of airstrikes and hundreds of Afghan and American Special Operations missions.

But the conventional Afghan military is largely in a defensive posture, holding what territory it can and focusing on securing the major roads that connect Afghanistan’s larger cities to one another.

More than 50,000 Afghan security forces have been killed since 2014. And though Afghan casualties have waned in recent months, American military officials said, they are still deeply troubling if the Afghans are to keep fighting, especially should the Americans withdraw.