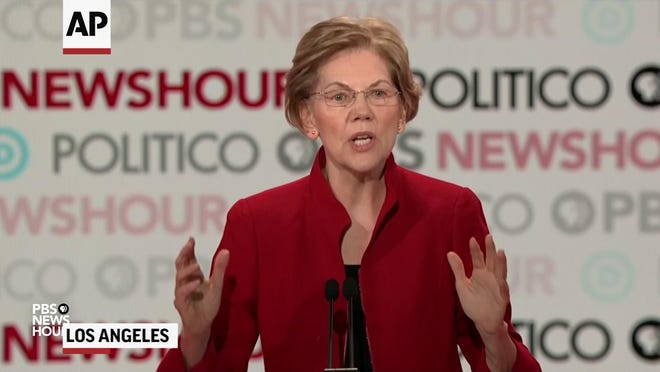 CEDAR RAPIDS, Iowa – U.S. Sen. Elizabeth Warren says she “saw how the system worked” when she held the type of fundraiser that she now decries and decided she’s “going to do better than that” as she campaigns for president.

In her first trip to Iowa after Thursday’s Democratic presidential debate, in which Warren and South Bend, Indiana, Mayor Pete Buttigieg sparred over the issue of high-dollar fundraisers, the Massachusetts senator was forced to defend herself after an Associated Press report revealed she held an event in June 2018 that charged people to get in. The news article said Warren charged $2,700 for a photo, $1,000 for a souvenir wine bottle, and a $100 entry fee.

When asked about the article by reporters in Cedar Rapids on Saturday, Warren said she decided to forego those types of fundraisers when she chose to run for president.

“I have been here almost a year now, and I have sold no access to my time. I have made no special calls to rich people. I haven’t had a single fundraiser behind closed doors,” she said. “I want to move the system in a better direction, not in a worse direction.”

Democratic debate:Here are the winners and losers from the December match-up

On the debate stage Thursday, Warren criticized Buttigieg over a fundraiser that was held in a Napa Valley wine cave owned by billionaires. A bottle of wine cost $900 at the event, according to the AP report.

“Billionaires in wine caves should not pick the next president of the United States,” she said on stage. Buttigieg shot back, pointing to her past practices and the transfer of $10 million from her Senate campaign to her presidential campaign – some of which had been raised at large donor events.

“This is the problem with issuing purity tests you cannot yourself pass,” the mayor said. He argued that Democrats cannot afford to turn any donors or supporters away if they are going to get the resources necessary to defeat President Donald Trump.

Warren has since sworn off high-dollar fundraisers and has pledged not to take money from big donors. She and U.S. Sen. Bernie Sanders say big money is what’s corrupting politics.

“You know, I don’t think the American people are looking for purity,” Warren said in Cedar Rapids, when asked if she regrets holding the fundraiser. “I think they’re looking for someone who is trying – trying to make the system better. And that’s what I’m doing.”