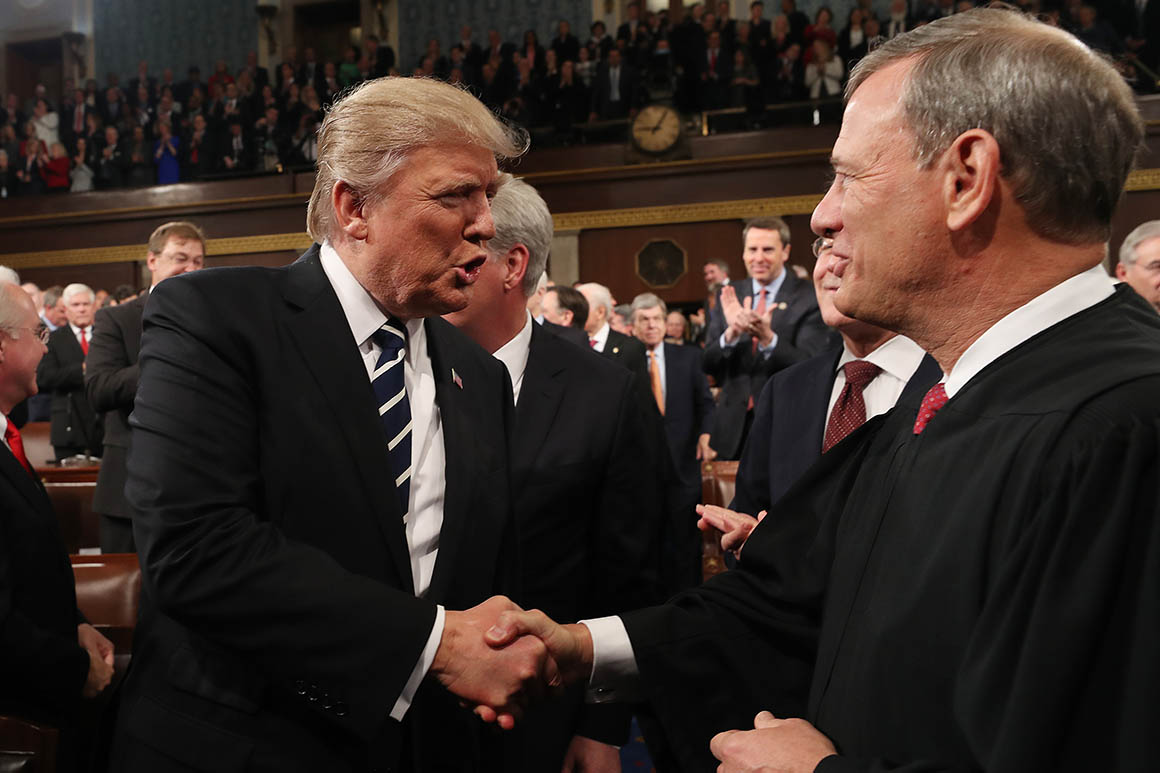 But his role before Congress is ambiguous at best. The Constitution says only that “the Chief Justice shall preside” before the Senate as it considers whether a president impeached by the House should be convicted and removed from office.

And past chief justices have had opposing interpretations of that mandate. During Andrew Johnson’s 1868 impeachment trial, Salmon Portland Chase was seen as a partisan, forceful interlocutor who clashed with senators over his rulings on several procedural questions. During Bill Clinton’s trial, William Rehnquist, who a few years earlier had actually written a book in part on the Andrew Johnson impeachment trial, largely let the 1999 Senate run the show.

“I did nothing in particular and I did it very well,” Rehnquist told interviewer Charlie Rose in 2001. Rehnquist took the line — and the gold stripe embellishments he added to his judge’s robe for the occasion — from the Gilbert and Sullivan operetta ‘Iolanthe,’ which he admired.

On and off Capitol Hill, expectations are high that Roberts, himself a former Rehnquist Supreme Court clerk, will follow the more recent Clinton trial model while still leaving his own imprint on the proceedings. That means being quick to enforce civility among the House and Senate lawmakers and Trump representatives who will have floor privileges in the historic chamber. He’ll have to contend with a cadre of lawmakers who have increasingly embraced the president’s low-blow tactics.

Roberts will also have a big say over the trial’s schedule, a task that might sound logistical but will have him stifling rambling senators and forcing them to stay seated for long stretches — senators can’t leave their seats during impeachment trial sessions.

Rehnquist was a stickler for time during the Clinton debate. He gavelled down West Virginia Sen. Robert Byrd, then the chamber’s most senior Democrat, when he exceeded his limits during a speech. And Rehnquist also overruled the Senate majority leader on multiple occasions by keeping everyone in their seats into the early evening hours when they’d asked to be sent home.

“I think the chief justice is his own man, and he’s a good man and he’ll be very fair,” said retiring Kansas GOP Sen. Pat Roberts, who voted for Clinton’s conviction in 1999. “I think that’s the key thing. He’ll be strong.”

While the Senate’s nonpartisan parliamentarian will be just a few steps away, with easy access to help Roberts navigate the chamber’s arcane rules and two-plus centuries of precedent, the chief justice does retain the power to render his own decisions that can influence the trial’s trajectory (although a majority of senators can always overrule him). Longtime Senate veterans don’t see Roberts pushing that envelope.

“He probably doesn’t want to be embarrassed that way,” said Don Ritchie, the Senate historian emeritus. “It’s going to be very educating for him. He’s going to get to listen a lot.”

Connecticut Democratic Sen. Richard Blumenthal, a member of the Judiciary Committee, said he expects Roberts will be “properly deferential to his limited constitutional role” during the trial. Republican Sen. Ted Cruz, an ex-Texas solicitor general who has argued six cases before Roberts, predicted the chief justice would be “non-political, to leave political determinations to the Senate, which is elected to make those kinds of determinations.”

“I would expect Chief Justice Roberts to follow and enforce the rules, but with some reasonable modicum of leeway,” added Cruz, who is also a former Rehnquist law clerk.

Regardless of the Senate trial outcome — an almost certain acquittal on both articles of impeachment is expected — Roberts won’t be out of the woods quite yet.

Last Friday, the Supreme Court granted three petitions from the president’s personal lawyers to hear cases in its March term that raise central questions of the Trump era. One dispute centers around a prosecutor’s ability to enforce a subpoena against a sitting president under criminal investigation. The other revolves around Congress’s ability to enforce subpoenas as part of their oversight duties.

Opinions are likely by June, and the results could go a long way toward determining whether Trump’s all-out blockade of Congress over the last three years will get a legal imprimatur.

And if all that wasn’t enough, still more drama awaits that could strain the Trump-Roberts relationship. Two more significant cases about forcing witness testimony look to be on their own direct glide paths to the Supreme Court — legal battles that raise yet more questions about the separation of powers between the White House and an inquisitive Congress.

House Democrats have prevailed before federal district court judges in both cases, winning rulings that lawmakers in the middle of impeachment proceedings have the right to question former Trump White House counsel Don McGahn under oath and to review special counsel Robert Mueller’s most sensitive investigative secrets.

The cases are now scheduled to be argued Jan. 3 before back-to-back federal appellate panels in Washington, D.C., and the losers there are almost certain to pitch the Roberts court for yet another intervention.

While any veteran Supreme Court expert would warn against trying to predict how the justices will rule on the Trump-related cases, no one is doubting the significance of what those rulings could mean for Roberts’ legacy and the court’s reputation.

Trump’s brash, confrontational style of politics has always seemed at odds with the chief justice’s background and his outlook on the court. Robert is fond of emphasizing the justices’ collegiality and has stressed the value of consensus rulings over 5-4 splits, sometimes irritating his more doctrinaire conservative colleagues in the process.

But the differing perspectives of the chief executive and the chief magistrate became explicit just before Thanksgiving last year, when Roberts publicly rebuked the president for using the phrase “Obama judge” to deride a federal jurist in California who ruled against one of Trump’s efforts to limit opportunities to apply for asylum.

After enduring months of criticism for remaining silent in the face of previous Trump attacks on the judiciary, Roberts issued a statement that didn’t directly reference the president but still served as an unmistakable rejoinder.

“We do not have Obama judges or Trump judges, Bush judges or Clinton judges,” Roberts said in a statement. “What we have is an extraordinary group of dedicated judges doing their level best to do equal right to those appearing before them. That independent judiciary is something we should all be thankful for.”

It might have ended there, but Trump stuck to his brand and delivered a pointed retort on Twitter.

“Sorry Chief Justice John Roberts, but you do indeed have ‘Obama judges,’ and they have a much different point of view than the people who are charged with the safety of our country,” Trump wrote. “We need protection and security — these rulings are making our country unsafe! Very dangerous and unwise!”

Still, Trump’s lawyers have taken an assertive path to get their disputes in front of the Roberts court, believing they have a better shot there than in the lower courts. Trump, too, increasingly seems to view the highest court as his friendliest terrain. He even mused earlier this month about whether the Supreme Court could halt impeachment, declaring that the congressional proceedings to remove him from office “shouldn’t even be allowed.”

“Can we go to Supreme Court to stop?” the president then asked.

It’s a question no one in the president’s orbit is actually considering, though Supreme Court Associate Justice Ruth Bader Ginsberg during an on-stage interview with the BBC on Monday in New York snapped back when asked about the remark.

Court watchers say they’re concerned the Supreme Court — and the chief justice in particular — will inevitably get dragged into the president’s political fight.

“I can see Trump tweeting terrible things about Roberts,” said a former senior federal law enforcement official. “I don’t think he has any barriers.”

Alan Dershowitz, the retired Harvard law professor who is under consideration for a job on the Trump legal team during the upcoming Senate trial, said in an interview that he would urge the president and all of the justices to step back from their respective megaphones.

“I think it operates both ways,” he said. “I think both the justices and the president ought to leave each other alone.”

But Dershowitz also appears interested in stirring the pot. He published in an op-ed in The Hill newspaper on Monday arguing that the second article of impeachment against Trump — accusing Trump of obstruction of Congress — has actually been undercut by the Supreme Court’s decision to take up the cases about congressional subpoenas.

Dershowitz urged lawmakers to vote the article down, saying it “truly endangers our system of checks and balances and the important role of the courts as the umpires between the legislative and executive branches under the Constitution.”

In the interview, Dershowitz said Roberts could be placed in an awkward spot should he be asked during the Senate trial to rule on a motion to dismiss the second impeachment article, given that he’ll likely have to to address the legal questions surrounding the matter at the Supreme Court sometime next year.

“We’re in uncharted territory,” Dershowitz said. “Knowing Chief Justice Roberts for a long time from his days as a law school student, I think he’ll act cautiously, prudentially and in a way to preserve the institution of the Supreme Court and the institution of the chief justice justice as a presiding officer.”

“I have every reason to think he’ll do so in a fair and impartial manner,” he said. “It comes with the territory.”