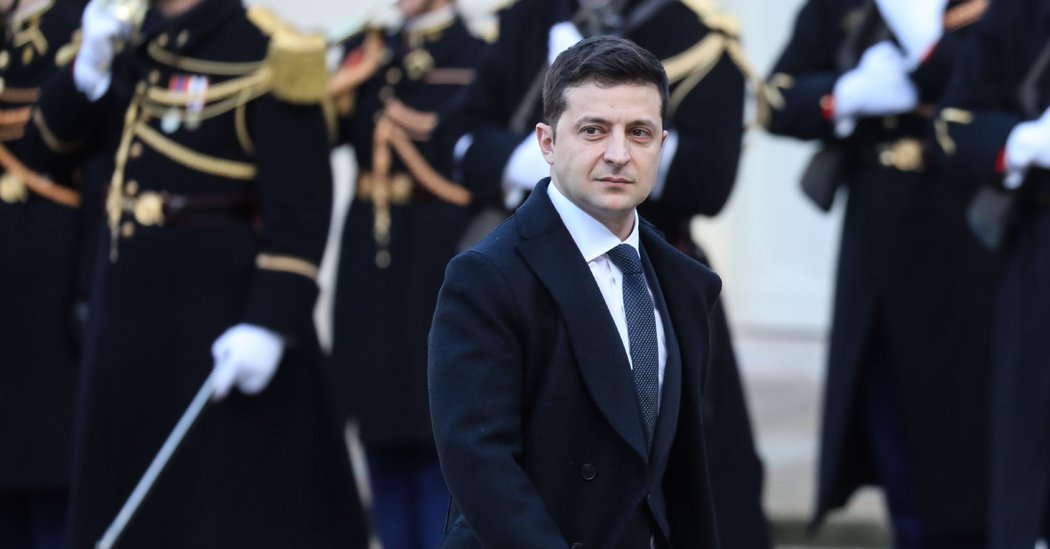 WASHINGTON — About 90 minutes after President Trump held a controversial telephone call with President Volodymyr Zelensky of Ukraine in July, the White House budget office ordered the Pentagon to suspend all military aid that Congress had allocated to Ukraine, according to emails released by the Pentagon late Friday.

A budget official, Michael Duffey, also told the Pentagon to keep quiet about the aid freeze because of the “sensitive nature of the request,” according to a message dated July 25.

An earlier email that Mr. Duffey sent to the Pentagon comptroller suggested that Mr. Trump began asking aides about $250 million in military aid set aside for Ukraine after noticing a June 19 article about it in the Washington Examiner.

The emails add to publicly available information about the events that prompted the Democratic-led House to call for Mr. Trump to be removed from office. On Wednesday, Mr. Trump was impeached for abuse of power and obstruction of Congress along a party-line vote after documents and testimony by senior administration officials revealed that he had withheld $391 million in aid to Ukraine at the same time that he asked for investigations from the Ukrainian president that would benefit him politically.

The emails were in a batch of 146 pages of documents released by the Pentagon late Friday to the Center for Public Integrity, a nonprofit news organization and watchdog group, in response to a Freedom of Information Act request.

Despite the timing of Mr. Duffey’s email, officials testified before Congress that the hold on the aid was announced at a meeting on July 18 involving a range of administration officials, including some from the Office of Management and Budget. Mick Mulvaney, the acting White House chief of staff and director of the budget office, was said to have told people that the president had directed the aid to be frozen. Other officials have testified they knew by early July of the hold.

Rachel Semmel, a spokeswoman for the budget office, said, “It’s reckless to tie the hold of funds to the phone call,” noting the mid-July announcement of the hold at an interagency meeting.

Senator Chuck Schumer, Democrat of New York and the minority leader, has pressed for Mr. Duffey, a political appointee who is associate director of national security programs at the Office of Management and Budget, to testify in a Senate trial. On Twitter on Saturday, he pointed to the July 25 email as “all the more reason” Mr. Duffey and others must appear. Republican Senate leaders have indicated they do not plan to call witnesses.

The email raises further questions about the process by which Mr. Trump imposed the hold on the military aid, and the link between the hold and the requests he made of Mr. Zelensky in the telephone call, which prompted concern among national security officials with knowledge of the conversation.

In the call, after Mr. Zelensky mentioned Ukraine was ready to buy anti-tank missiles to use in a war against a Russian-backed insurgency, Mr. Trump said, “I would like you to do us a favor though,” according to a reconstructed transcript released by the White House. He then pressed Mr. Zelensky to open an investigation based on a conspiracy theory that Ukraine had interfered in the 2016 United States elections and one based on unsubstantiated claims of corrupt acts by former Vice President Joseph R. Biden Jr., the Democratic presidential candidate.

That call took place from 9:03 a.m. to 9:33 a.m. At 11:04 a.m., Mr. Duffey emailed Defense Department officials telling them of the aid, “Please hold off on any additional DoD obligations of these funds, pending direction from that process.” Obligation refers to the process of a government agency designating how funds will be spent.

In addition, he wrote, “Given the sensitive nature of the request, I appreciate your keeping that information closely held to those who need to know to execute the direction.”

A senior administration official, speaking on the condition of anonymity to publicly discuss the matter, said the timing of the email — an hour and a half after Mr. Trump’s July 25 call with Mr. Zelensky — was coincidental.

The official said the email was part of a weekslong exchange over aid to Ukraine. The July 25 email came after the budget office issued a formal, written hold on the aid, the official said. The reference to sensitivity around the discussions, the official said, was based on the potential for concerns about career officials at the agency that had arisen from previous instances when aid had been cut, as well as the fact that the freeze related to national security matters.

The Pentagon did not reply to a request for comment.

In a June 19 email, Mr. Duffey asked Elaine McCusker, the Pentagon comptroller, about the aid in the context of the Washington Examiner article, saying, “The President has asked about this funding release, and I have been tasked to follow-up with someone over there to get more detail.”

According to the private testimony of Mark Sandy, a senior budget official, Mr. Trump began inquiring about the aid on June 19 after seeing a news report. Mr. Sandy said in a closed-door deposition before lawmakers in November that he learned of Mr. Trump’s decision to freeze the aid through a July 12 email from Robert Blair, an aide to Mr. Mulvaney.

A Ukraine expert on the National Security Council, Lt. Col. Alexander S. Vindman, told Congress that he had learned by July 3 that the budget office had delayed the aid. Jennifer Williams, an aide in the vice president’s office, testified that the State Department had informed Colonel Vindman of this.

A congressional aide said the budget office in June had blocked the State Department’s planned notification to Congress that it was proceeding with its $141 million in aid, separate from the Pentagon’s package.

The emails underscore what some officials say was the central role that the Office of Management and Budget played in Mr. Trump’s Ukraine pressure campaign, which he orchestrated with the help of his personal lawyer, Rudolph W. Giuliani.

Democratic leaders in Congress have called for testimonies from Mr. Mulvaney; John R. Bolton, the former national security adviser; and Secretary of State Mike Pompeo. None have agreed to testify.

Mr. Bolton is said to have opposed the pressure campaign on Ukraine, while Mr. Pompeo enabled it — he spoke with Mr. Giuliani weeks before he helped Mr. Giuliani and Mr. Trump with the April ouster of the United States ambassador to Ukraine, Marie L. Yovanovitch, who promoted anticorruption efforts.

Mr. Sandy’s private testimony disclosed that some budget officials were disturbed by the aid freeze to Ukraine. Two budget officials resigned this year in part out of frustration at the freeze, he said. One official had been frustrated by not understanding the reason for the hold, Mr. Sandy said, and another had offered a “dissenting opinion” on whether the hold was legal.

Mr. Trump released the aid on Sept. 11, after he learned of the whistle-blower complaint in late August. Mr. Bolton had resigned the previous day, though to what degree that was tied to Ukraine is unclear. Mr. Duffey wrote an email to Ms. McCusker at 9:52 p.m. on Sept. 11 saying he hoped that the signing of the release order would take place that night, and that he was “glad to have this behind us.”