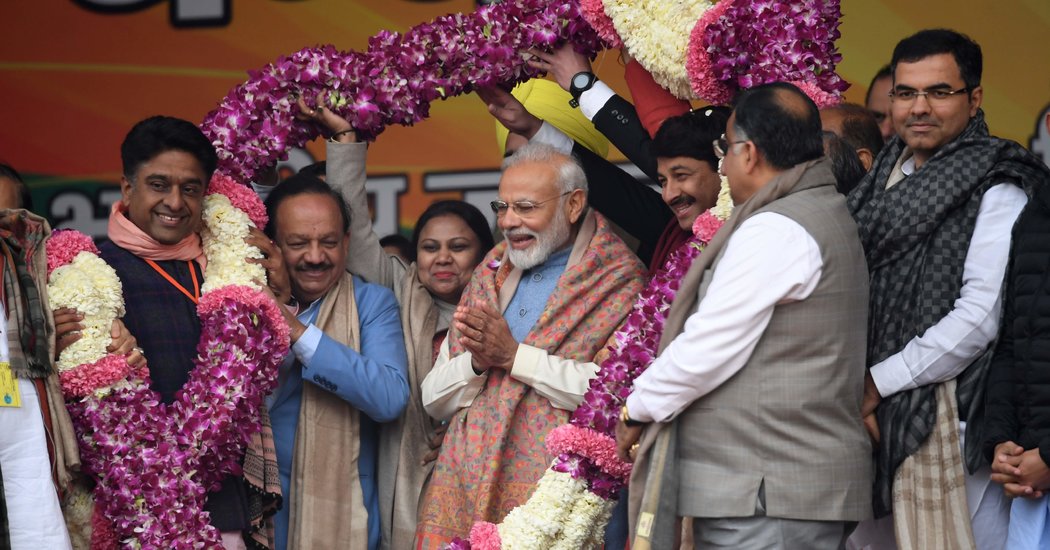 NEW DELHI — Prime Minister Narendra Modi of India delivered on Sunday strident defense of a contentious citizenship law that has fueled deadly protests, accusing opposition politicians of “spreading lies” and demonstrators of trying to destroy the country through vandalism and bloodshed.

During an often combative speech in New Delhi, Mr. Modi signaled that he would not scrap the law, which favors every South Asian faith other than Islam.

Critics argue that the law is glaring evidence of that the government plans to turn India into a Hindu-centric state and marginalize the country’s 200 million minority Muslims. Mr. Modi, in his speech, dismissed the notion that the law was discriminatory.

“Respect the Parliament!” Mr. Modi said to thousands of supporters. “Respect the Constitution! Respect the people elected by the people! I challenge the ones who are spreading lies. If there is a smell of discrimination in anything I have done, then put me in front of the country.”

Over the past two weeks, hundreds of thousands of Indians have taken to the streets in opposition of the Citizenship Amendment Act, which the Indian Parliament approved this month. The protests have drawn people of all faiths, concerned that the law undermines India’s foundation as a secular nation.

The demonstrations are the most significant challenge to Mr. Modi’s leadership since his Bharatiya Janata Party rose to power in 2014. Around two dozen people have been killed in the increasingly violent protests, and hundreds have been arrested. The authorities have been criticized for detaining demonstrators — including children — without legal recourse, shutting down internet and phone services, and firing live ammunition into crowds.

Under the government of Mr. Modi, Muslims and others have been concerned about the rise of Hindu nationalism. Muslims have been lynched by Hindu mobs. The government stripped the country’s only Muslim-majority state, Jammu and Kashmir, of its autonomy. It instituted a citizenship test in Assam, which it plans to roll out nationally.

To critics, Mr. Modi is pushing an authoritarian agenda that threatens to erode the country’s secular foundation, shrink space for religious minorities and move the country closer to a Hindu nation.

Long a dream of Hindu nationalists, the Citizenship Amendment Act establishes a religious test for migrants who want to become citizens. Muslim Indians worry that the government could use it to render many of them stateless.

In his speech, Mr. Modi argued that the law was meant only to extend citizenship to religious minorities fleeing persecution in three Muslim-majority countries: Afghanistan, Bangladesh and Pakistan. He said that it would not be used against Indian citizens, pointing to development projects as a sign that the government extends public services without regard for religion.

“I want to clarify once again that the C.A.A. is not going to take away anybody’s citizenship,” he added, referring to the law. “It is about giving citizenship to those facing discrimination.”

But many protesters worry that the citizenship law would be used in tandem with a program that began this year in the northeastern state of Assam, which borders Bangladesh and has a high migrant population. The authorities instructed the state’s 33 million residents to prove, with documentary evidence, that their families were Indian citizens.

Approximately two million people — many of them Muslims — were left off the state’s citizenship rolls after that exercise. The Indian home minister, Amit Shah, has vowed in speeches to expand the test to other states and to purge India of “infiltrators” and “termites.” The authorities have already started building detention centers for those who cannot prove their roots.

Indian Muslims, who were relatively quiet as Hindu nationalism reached new heights under Mr. Modi’s government, have finally erupted in anger, with protests over the citizenship law spreading across the country.

Over the weekend, the demonstrations took another deadly turn. Residents across Uttar Pradesh, India’s largest state and a stronghold of Mr. Modi’s party, said that the police broke into the homes of Muslims, took away hundreds of young men, vandalized property and beat people with sticks in the streets.

“The police came in the night, destroyed cars parked on the roadside, and broke gates to our homes,” said Mohammad Rashid, who lives in the city of Kanpur, where at least two people have died. “We are being treated like animals.”

The police maintained until recently that no bullets have been fired at demonstrators, but videos posted on social media have challenged that claim.

In one video, a police officer wearing a safety jacket and a helmet fires what looks like a revolver in a street where protesters had gathered. Moments later, a person shouts in the background, “Remove the cameras! Let them shoot!”

On Sunday, Mr. Modi sought to quell consternation over the protests, characterizing them as fueled by his political enemies and “urban Naxalites” intent on destroying the government at any cost.

He beseeched the crowd to resist their “evil game.” He accused protesters of vandalizing property, targeting the police (whom he called “martyrs”) and spreading rumors about the fate of Indian Muslims. He made no mention of protesters who had been killed. He denied that detention centers existed.

The law “has nothing to do with Muslims who are made out of the soil of India, whose ancestors are the sons of Mother India,” he said, adding: “No Indian Muslims are being sent to detention camps.”

Evoking Mahatma Gandhi, the Indian independence fighter who championed nonviolent protest, Mr. Modi suggested that standing against the law “with stones” was a betrayal to India and part of a “conspiracy to malign the country around the world.”

“They have an illicit intention of destroying the country,” he said of the demonstrators. “When you see bricks and sticks in the hands of the protesters, I feel pain, as does the rest of India.”