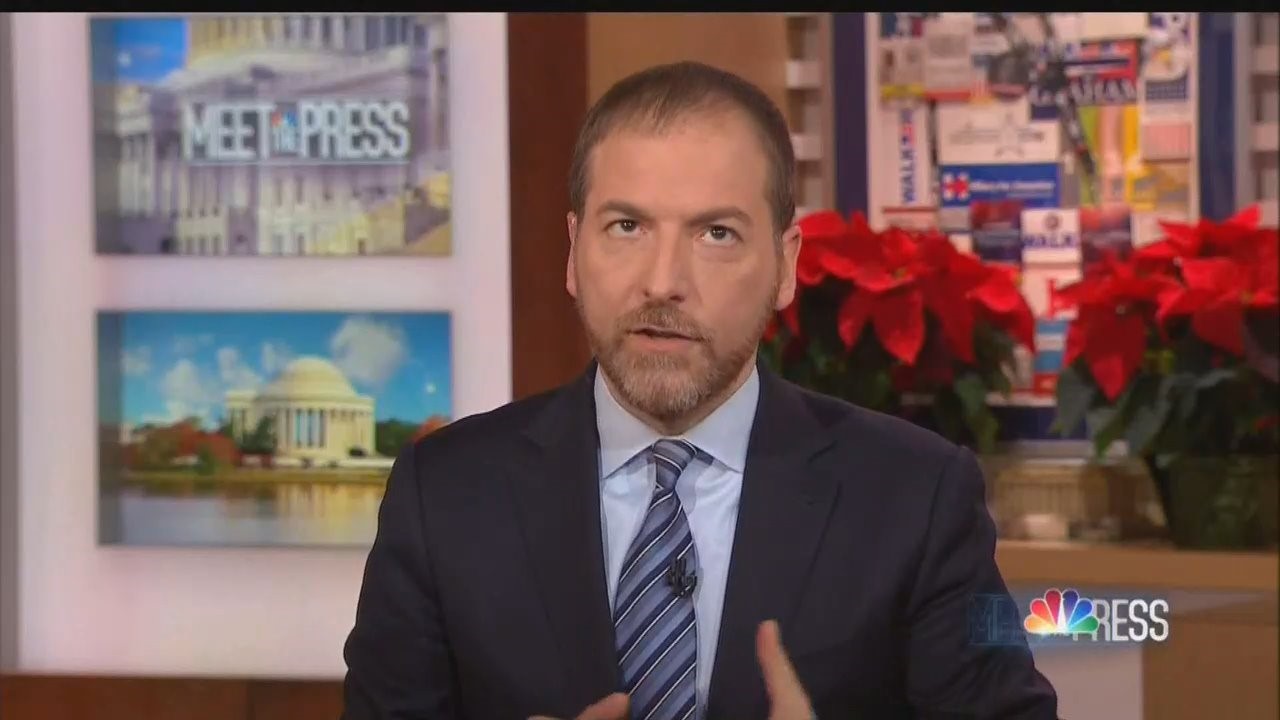 Liberals think Chuck Todd is the “gold standard” of pundits/interviewers. Tom Jones of the Poynter Institute honored Todd as the “media personality of the year.” But on Wednesday, Rush Limbaugh accused Todd of attempting an ineffective coup, as impeachment makes no dent in President Trump’s approval ratings….which are actually going up.

Jones gushed over Todd: “He hosts the shouldn’t-be-missed Meet the Press, still the gold standard of Sunday morning news shows…He is front and center on NBC’s debate and impeachment coverage. And whenever there’s breaking political news, he’s the network’s go-to voice on the NBC Nightly News. His excellent interview skills of the top newsmakers and his accessible delivery make him THE voice when it comes to news in these politically divided times.”

Rush Limbaugh cited Todd’s 9 am-hour lament (captured by our Kyle Drennen) that “This should be a moment where the whole country is basically having their own gut check, where we are having a national conversation trying to figure this out. The fact that we’re not having it just tells you how numb we are to the politics that we participate in.”

LIMBAUGH: The Drive-By Media today wanted this to be a grave day — very grave, historic and solemn. They wanted people to stop what they were doing and to get very, very serious and solemn, and to understand how desperately needed and important it is to get Donald Trump thrown out of office so as to save the world. But they haven’t pulled it off… They wanted to be the priests! Well, not really because they don’t like God/religion.

Todd said America is numb. “No, Chuck. No,” said Limbaugh. “It’s a testament to how ineffective your coup has been.”

LIMBAUGH: They haven’t moved Trump’s number down. Look, they were able to get George W. Bush down to the 30’s. Now, it took ’em about six years. It didn’t happen overnight. You know, George W. Bush was in the 50’s after 9/11 and then the high 40’s and the mid-40’s and low-40’s and finally in the 30’s. It took a little time and it was a long trend line. They haven’t even been able to create the downward trend line for Trump. And they’ve thrown everything they’ve got at him, every allegation — treason, stealing an election, colluding with a foreign [power].

I think Chuck Todd’s worried that this isn’t remarkable. I think the American people are fully aware of how outrageously remarkable their charges have been, and the American people are very clear on the fact they haven’t seen any evidence for any of it, starting with the Mueller Report, but even before that. There’s no evidence for anything. These charges are so outrageous and over the top, I don’t think anybody really believed them to begin with in a serious majority sense.

You talk about overreach, and it’s classic overreach, done by people who keep failing.