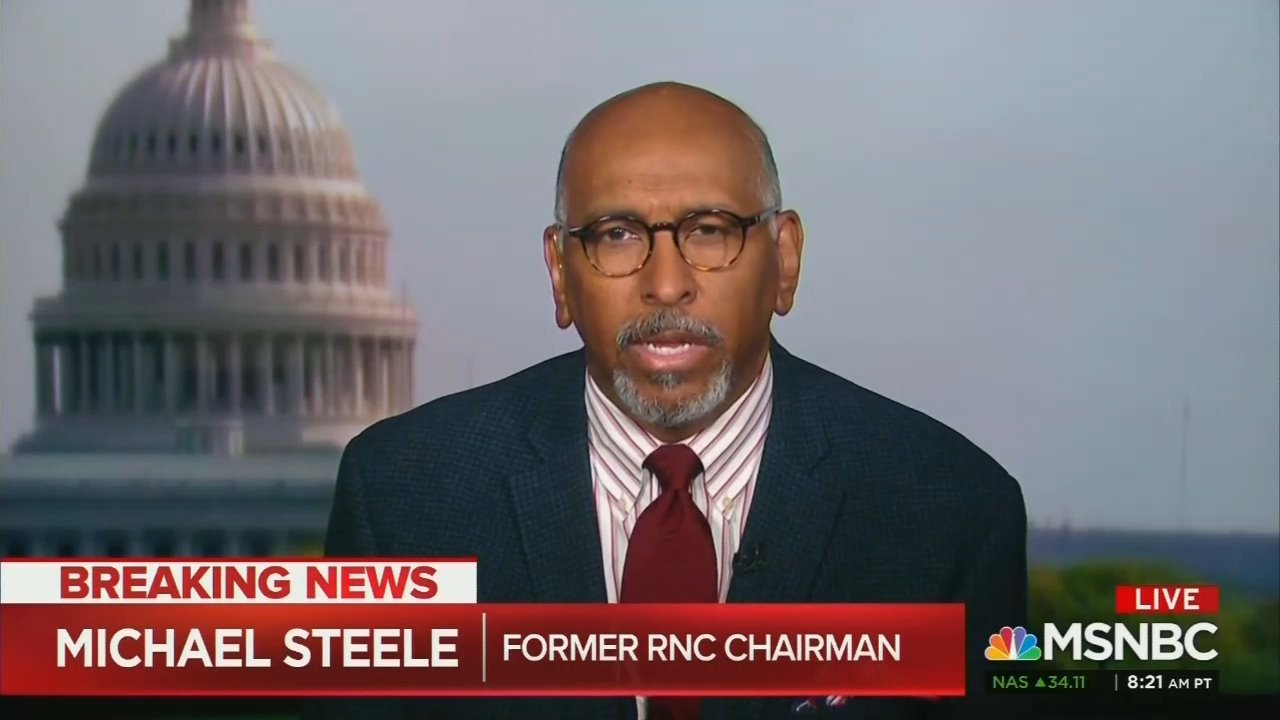 Former RNC chairman Michael Steele is the kind of Republican that MSNBC loves. He is more than willing to repeat the latest liberal talking points about President Trump. He continued that tradition on Thursday’s MSNBC Live when he endorsed the latest scheme by House Speaker Nancy Pelosi and Harvard professor Laurence Tribe to refrain from delivering the articles of impeachment to the Senate until Senator Mitch McConnell gives into their demands for witnesses.

Steele completely ignored the language of the Constitution, which plainly states “The Senate shall have the sole Power to try all Impeachments.” They don’t need to negotiate anything with Pelosi. But Steele touted Pelosi as having some “advantage” that she’s holding in her pocket.

Guest-host Chris Jansing began by asking Steele, “If this ends up being Donald Trump and Nancy Pelosi going toe to toe, who’s got the advantage here How do you see this playing out?”

MICHAEL STEELE: I think the wilder card is Nancy Pelosi. She has impeachment that she has placed in front of the country and put on the president’s desk. He’s got to deal with that reality. The Senate is posturing right now. They don’t have the leverage because Nancy Pelosi is not constitutionally, really or regulatorily bound to submit anything on their timetable. They know that. So the rhetoric will be hot and heated. It will have a lot of buzzwords about how weak her case is —

CHRIS JANSING: But talk all they want, Michael, except those of us who are in this, watched all 12 hours, 13 hours yesterday, people are going to be going about their business.

JANSING: You can talk all you want, but I don’t know how much a lot of folks out there are going to be paying attention for the next couple weeks.

STEELE: Exactly, and that works to Nancy Pelosi’s advantage.

STEELE: Exactly, they’re not paying attention to it. We’re about to celebrate Christmas, Kwanzaa, holidays, et cetera, and the reality of it is when she decides to drop this, it will be at a moment when a number of things percolate in front of the American people.

Primaries in Iowa and New Hampshire, another Democratic debate or whatever and then this. So this narrative can be extended, as she sees it.  I don’t agree with those who think, oh, she’s got to submit it before Congress breaks. No. Nancy is going to hold it in her pocket, she’s going to wait to see what McConnell puts on the table and she’s going to force the negotiation between Schumer and McConnell on her terms. Watch it and see what happens.

PS: Back in October, Steele bragged in a podcast with Washington Post columnist Jonathan Capehart that Pelosi had Trump’s Kryptonite:

“[Trump] is self-absorbed to the point where he thinks he’s Superman, invulnerable. . . . But what I like to remind folks [is that] Kryptonite’s a funny thing. And Nancy’s got Kryptonite,” Steele said. “The Constitution is the ultimate Kryptonite. And I think that moment is rapidly approaching, where — . Taking that picture of Nancy standing in that room. She takes that Kryptonite out of her purse and puts it on the table and walks out of the room. And homeboy can’t get up ’cause he’s now too weak. And I think that’s her play, I think that’s — . That’s why I’m saying: ‘Trust Nancy’.”