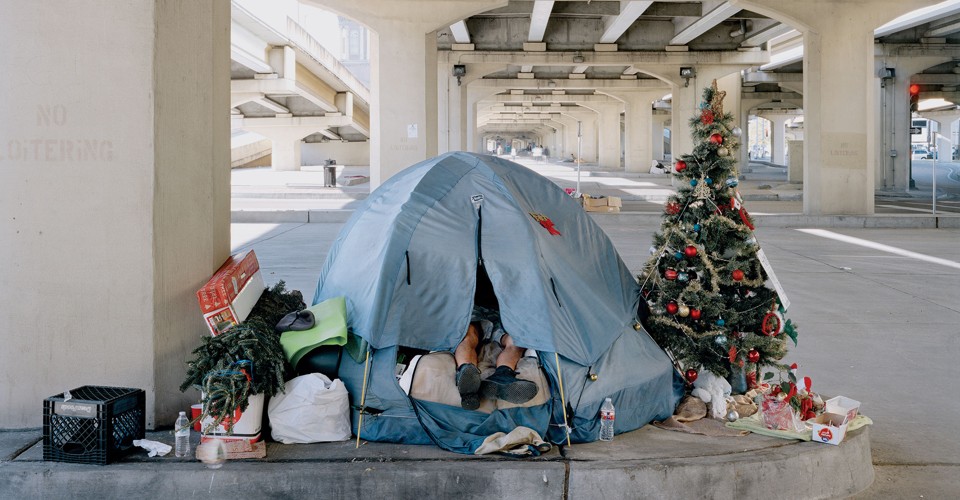 On a warm, sunny December day in 2015, Joshua Dudley Greer drove into New Orleans and set up his large-format camera beneath Pontchartrain Expressway. The scene Greer encountered was both somber and festive, an assertion of personal space in the bowels of an industrial structure marked no loitering. The tinsel, the carefully placed ornaments, the gold star atop a tree too tall to fit inside its owner’s small tent—these items were hardly practical, let alone portable. They suggested, to Greer, “a public gesture,” an effort, perhaps, to stake out a sense of normalcy.

Greer was in New Orleans as part of a series of road trips he’d begun taking in 2011, during which he photographed people and places on and around the American network of superhighways. “Rather than moving quickly through these spaces,” Greer has written, he “made the decision to slowly and deliberately dwell within them, looking for unforeseen moments of humor, pathos and humanity.”

The New Orleans photo contains layers of humanity. While the viewer’s eye is initially drawn to the individuality of the figure in the foreground, closer inspection reveals others in the distance—a reminder of the scale of homelessness, which is ultimately a systemic, nationwide problem.

Amy Weiss-Meyer is a deputy managing editor at The Atlantic.
Category: News
Tag: Atlantic US