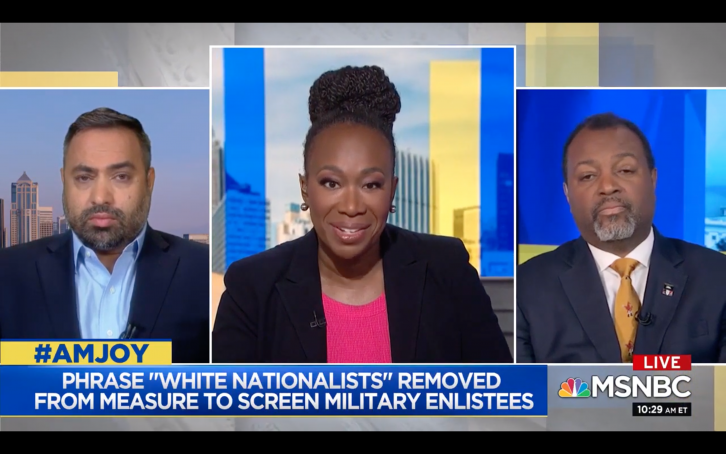 MSNBC guest Naveed Jamali said military cadets need to be taught that the OK hand symbol “shouldn’t be something that’s okay” to display.

“I don’t doubt that those midshipmen and that West Point cadet were actually not doing the white power symbol,” Jamali said Sunday. “But it’s got to be something that we teach. It shouldn’t be something that’s okay. They should understand why it’s not okay to do that.”

Jamali was discussing the controversy surrounding a group of West Point cadets allegedly displaying a white power symbol during the Army-Navy football game. An investigation found that the cadets were actually playing the “circle game” and were not displaying a white supremacist symbol, but AM Joy host Joy Reid still thought it was worthy of concern.

“It’s so concerning to military leadership that when you have members of the Naval Academy playing what they’re now saying was the ‘circle game’ and doing it on camera, it prompts an investigation within the military,” Reid said.

Reid had previously accused the cadets of displaying the white power sign and “making sure it got on TV.”

Media outlets circulated the reports of the cadets appearing to make a “White Power hand symbol.”

Students appeared to make the White Power hand symbol during a pregame broadcast of the Army-Navy game. https://t.co/YYoxioCwsk

The hand gesture has become associated with white supremacy due to an online hoax perpetrated by anonymous 4chan users.

“The investigating officer concluded that the cadets were playing a common game, popular among teenagers today, known as the ‘circle game’ and the intent was not associated with ideologies or movements that are contrary to the Army values,” the Army’s Twitter account stated.